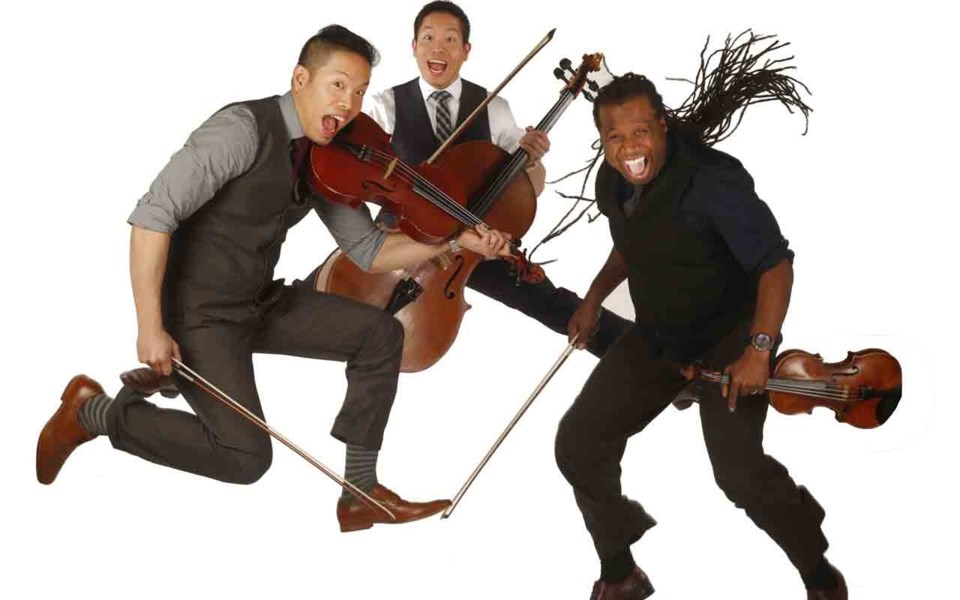 For most people, classical music lies on the complete opposite side of the spectrum from hip hop.

But for Infinitus, a beatboxing string trio, that doesn't mean they can't intersect.

The Vancouver-based trio—comprised of Alex Cheung on cello, his twin brother Anthony Cheung on viola, and John "Adidam" Littlejohn on violin—melds classical standards together with original jazz and hip-hop arrangements and compositions to create their own unique sound. Their inspiration ranges far and wide, even incorporating Latin and African influences.

"A classical music lover, when they listen to our music, they always hear a depth of composition, and they see a technique that you wouldn't catch sometimes outside of classical music ... If you like a classical trio or quartet, you're going to like our group. But we're going to improvise. We're going to beat box. It's kind of like classical, but extra," explains Littlejohn.

While Infinitus' style may seem innovative, Littlejohn sees their approach as taking classical back to its roots. "Classical music (used to be) totally relevant to culture," he says. "They were bringing in different styles. Mozart was bringing gypsy music into his music—things people would have been dancing to in the streets, they'd write into a symphony. At some point it sort of lost that connection, so I find people are usually just refreshed."

Littlejohn first met his future group-mates while studying music at the University of Michigan together. "We were roommates and best friends, and didn't actually start playing together a whole lot at Michigan," he says.

It was only when the three musicians reunited about five years after graduating that they realized that bond could translate into something special onstage.

"It felt kind of like being in the desert for awhile and then you get that first drink of water," Littlejohn says of their reunion.

"We always had that interest in not just being a classical group, but being able to do classical at a high level but also being able to do non-classical music well—improvisation and hip hop. Those things all found themselves naturally in what we were doing."

That unique mixing of genres has allowed Infinitus to leave their mark on a wide range of audiences since officially forming in 2008. They've performed everywhere from classical concert series and churches to hip-hop clubs and prisons, have taught at workshops and even held a residency at the Lincoln Center for the Performing Arts in New York City.

"We just play music anywhere we can, and we find that as long as we connect with the audience ... people are usually eager to connect with us," Littlejohn says.

To that end, Whistler audiences can expect a little more interaction when the trio takes to the stage at Our Lady of the Mountains Catholic Church on Sunday, April 8 at 5 p.m., presented by the Whistler Chamber Music Society.

"Classical music audiences oftentimes don't get a chance to connect to classical artists, because we usually don't talk to the audience—we don't explain what we're doing, we just sort of let the music speak for itself. There's something to that, but in that audience, what I've seen is maybe there's five people—and I'm being generous—out of 200 who get what you're playing. Most people can get it, they just wouldn't mind a little, brief explanation... so we give that," Littlejohn says.

Infinitus also allows for more audience participation than is typically seen at a classical concert, whether that's clapping along with the beat, or, in some cases, a special part for the audience that the trio has written into the piece.

"You can still sit and enjoy our concert—you're not at a rock concert; it's a classical series ... Although we have had people get up and dance at our concert, so I can't say it's out of the realm of possibility."

Tickets are $20 for adults and $15 for youth aged 34 and under. They're available in advance at the Whistler Museum (cash only), online at www.whistlerchambermusic.ca or at the door. For more information about Infinitus, head to infinitusmusic.com.