Inviting the light (and bringing the noise) 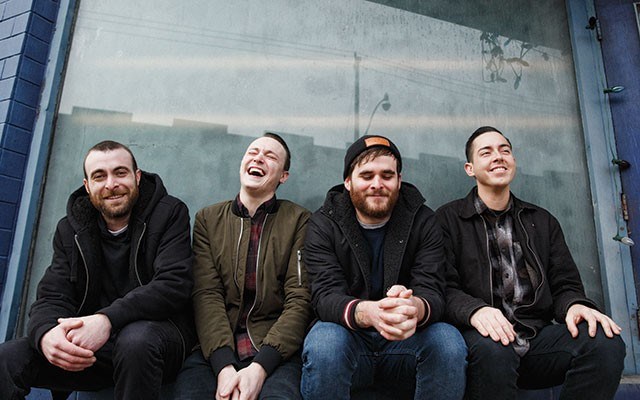 Chris Cresswell offers a single word to set expectations for the upcoming Flatliners show in Whistler.

"Loud," he says over the phone, during a brief, rare respite at his home in Toronto.

And then, after a short pause, he offers a few more.

No surprises there — The Flatliners have never been a quiet or gentle band.

But when the doors open at Garfinkel's on Sunday, June 4, the Flats won't be the only ones bringing the noise — the band is supported by Dine Alone Records labelmates The Dirty Nil and Sam Coffey and the Iron Lungs.

"Every band has their own take on the rock or the punk thing, and it's cool," Cresswell says. "It's going to be a nice mix of punk rock 'n' roll I think."

In putting together their first headlining tour under Dine Alone — in support of new album Inviting Light — The Flatliners (Cresswell on guitar and vocals, guitarist Scott Brigham, bassist Jon Darbey and drummer Paul Ramirez) had some stellar supporting acts to choose from.

"We wanted to do a pretty extensive Canadian tour with the new record because it's been awhile since we headlined, and we had the opportunity to kind of partner up with the label to make it a Dine Alone tour," Cresswell says.

"And lucky for us, Dine Alone has a bunch of... wicked bands on their roster, so we could kind of pick and choose."

The Dirty Nil grabbed headlines earlier this year when they landed a JUNO award for Breakthrough Group of the Year, and Sam Coffey is prepping a new album for July 28.

Both are sufficiently boisterous.

And while The Flatliners are still loud as ever, longtime fans will likely notice a different pace to Inviting Light — the band's fifth studio album is more mid-tempo rock numbers than the ska-infused speedpunk of its early days.

But the shift wasn't a conscious thing, Cresswell says — more of a natural, gradual evolution.

It wasn't until a few songs into writing Inviting Light that the band started to notice the change.

"I think we went and did some shows and we played some of our other stuff, and we were like, 'Oh, this is actually a bit of a left turn maybe,' but it wasn't that thought-out-loud," Cresswell says.

"But it was still a thing where, you know, at some point you start to realize that if it feels good, then you should maybe just do it, and that's what we did.

"We love how it turned out, but it is different, so I think for some fans of the band for awhile it maybe is still taking a minute to sink in."

Having formed in 2002, when all four members were 14 and 15 years old, Cresswell and The Flatliners have been a touring punk band for half of their lives — a sobering fact that served as inspiration for Cresswell's songwriting on the new album.

"The name Inviting Light, it kind of means a few things... I think in my lyrics there's always been a light-at-the-end-of-the-tunnel kind of vibe to it, and with everything that I was writing about on (2013's) Dead Language for instance, it was a really rough time in my life personally," he says.

"I had some really awful things happen to me in my personal life that I was able to write about and years later feel better about because of that process... I guess I'm hoping the demon I'm going to exorcise with this record is just being cool with maybe the self-imposed guilt trip that happens every once in awhile of me having been away for a long time."

The guilt trip is evident on album closer "No Roads."

"No road's gonna be missing... it's last bend before we're home. Truth told I wouldn't miss it... but it's damn deep in my bones."

It's been a long road to this point, with no end in sight, and at this stage of Flatliners existence, Cresswell uses the analogy of walking through a doorway.