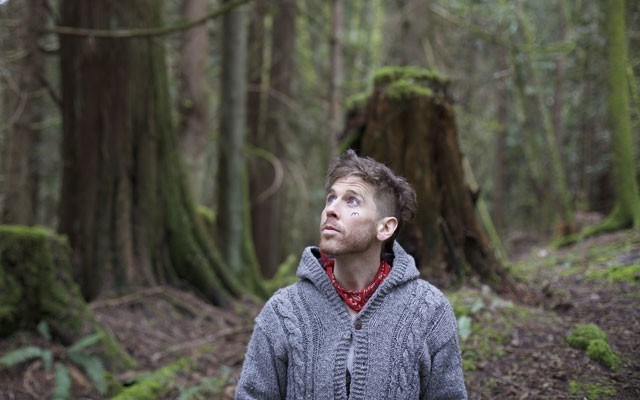 For his new single "Marrow," Whistler singer-songwriter Jesse Thom turned to the youngsters of Myrtle Philip Community School to make the video.

"They are the whole cast. They're all tobogganing and it is done in slow motion to beautiful music. It ended up being super powerful, I was working that day (Thom is also a youth worker) and happened to have my camera," he says.

"The children had been face painting, which adds to the spookiness and innocence. It was unplanned. We went to the snow hill after and I realized how good it was.

"It was perfect, because the song was written for my brother Alex, who died of bone marrow cancer when he was eight. The song uses the tobogganing as a metaphor, you are going down a hill with someone and you look over and they are gone."

That said, this is not a children's song, he adds.

It was important for Thom to create this tribute and he said expressing his grief helped him cope with the loss of his brother — a very grownup moment.

"It becomes part of you, the loss. In a way my music has been about impermanence. I work with kids, so children and impermanence are running themes in everything I make," he says.

"We've all lost someone. It's sort of a universal feeling."

"Marrow" appears under Thom's pseudonym AYRDRI on the album Snowdragon, released this week.

A teller of many stories under many guises, it can be hard to keep up with Thom's personas.

"AYRDRI essentially started as a solo project, but it is a specific style of music I created... it has its own name 'ghost pop.' AYRDRI is named after the town my ancestors are from in Scotland," Thom says.

"I've been working on it all winter."

The genre is meant to be haunting and Thom uses an invented character, a kind of 'ghostly muse' named Elli Tron, to get his message across.

"It's an adult music project in indie rock and pop," he says.

"I make kids' music and this is totally different. That's why we went with a separate name for it."

He says his avatars allow him to create new worlds to present his music.

"I want to create a sound and visual experience. It's a natural impulse for me to create characters and a world inhabited by a full sensory experience," he says.

The new release will be backed up by shows on Saltspring Island, Vancouver and Victoria. A Whistler performance will take place later this year.

Along with this, the Resort Municipality of Whistler asked Thom to perform his children's puppet show Some Bunny Loves You for their Easter Art Walk program on Easter Monday.

The video for "Marrow" can be watched on YouTube at www.youtube.com/watch?v=bHilhgiWvaM.