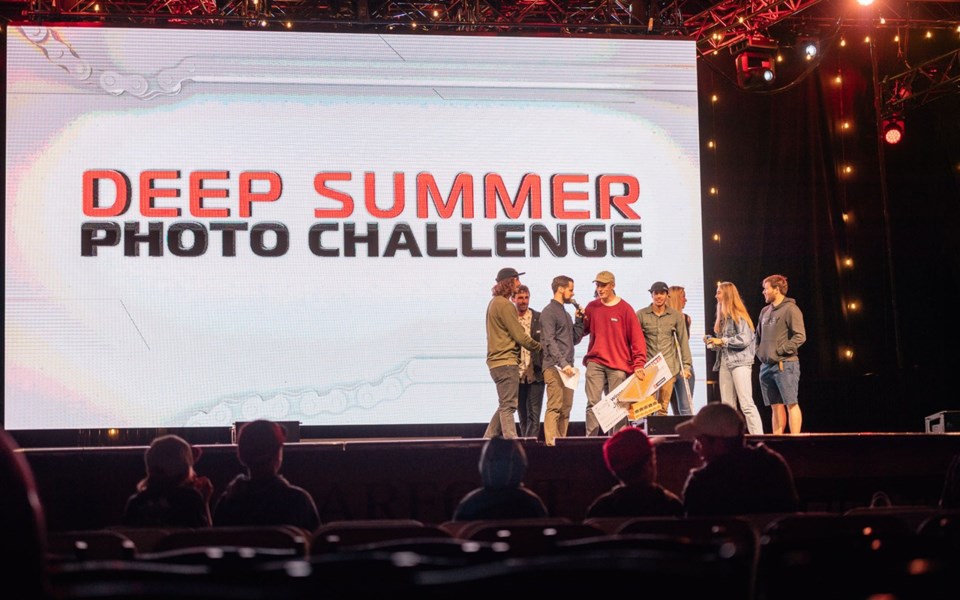 The host of the Deep Summer Photo Challenge had a question for contestant Jim Topliss.

"Where were you when your man went down?"

The 22-year-old Manchester photographer and his mountain bike crew spent a portion of their three-day shoot on the Sunshine Coast, soaking in some views and riding terrain on the other side of Howe Sound, when one rider broke his leg.

His fallen rider "powered through the pain" in the bumpy car ride to the hospital-but still managed to smile for a photo from his hospital bed.

That image was just one of several that earned Topliss the top spot at the contest on Tuesday night, Aug. 13, at Whistler Olympic Plaza. He also hoisted a cheque at New Zealand's Deep Summer-part of Crankworx Rotorua earlier this year.

As for his injured ride, he appeared to be on the mend, hobbling on stage with the help of crutches.

"It feels unreal," Topliss said after earning the $5,000 prize. "Honestly, so sick, mainly for the flipping team over here ... Everyone put everything in and I'm so stoked for them."

The crowd that gathered on the damp lawn continued to grow throughout the evening event, which showcased the photos of six photographers shot over three days-from Friday, Aug. 11 to Sunday, Aug. 13-and set to music in a slideshow.

While the rain stopped just short of the event kickoff, most of the photographers' photos featured at least some moody images, captured over a challenging weather weekend.

Cassandra Prochera, whose slideshow was displayed first, and her all-female crew of riders showcased the vibrant greens of the forest in nearby Squamish best.

Wildcard entry, Lear Miller, delved into the elements and came away with detailed pictures of the mud and fog. The highlight of his show, however, was the result of a long slog pushing bikes uphill into the alpine-a series of sunset photos over Howe Sound were the result.

"We went down South of Squamish to a remote peak I'd heard of and spent all Friday pushing our bikes uphill," Miller told the crowd. "It was pretty fun. The guys loved me for it."

"Our next show, the theme is 'Rides with mom,'" the host told the crowd beforehand. "Picture it, a little girl asked her mom to go on a ride, her mom explains they need to wait until her siblings come home, she rushes upstairs to her room to start drawing to pass the time. She doodles, she dreams, and the rest is Katie [Lozancich's] amazing, multimedia Deep Summer show."

Sprinkled throughout, Lozancich incorporated painting into her images-in one scene, a painting of Mount Currie morphs into the real thing. In another, a biker, mid-air, sprouts wings.

"I've been shooting the past three years and painting my whole life, so it was pretty cool to blend the two," she said.

Born-and-bred Whistlerite Michael Overbeck was the next featured photographer, earning the loudest crowd reaction from the fairly subdued group.

Set to quiet, acoustic indie-rock, it opened with images of a dog patiently resting its head on the lap of a pick-up truck driver and went on to showcase the reality of the sport-chainsaws to clear downed trees and the dirt-covered hands that result.

Along with stunning alpine shots, Overbeck's images best captured the forests in the Sea to Sky corridor, leaving the trees a subtle, natural hue, making them seem most true to life.

Finally, 19-year-old Peter Jamison rounded out the diverse offerings with his unique story captured on camera.

After dreaming of travelling to Whistler from the East Coast, in 2018 he and his friend moved into Jamison's decked-out camper van and drove to the resort in time for Crankworx. "It was a blast and I wanted to recreate that experience with some of my best buds," he said, adding, "[There were] no showers. It's pretty rough in the van sometimes."

His slideshow was perhaps the most diverse with images from his home on wheels and a biker whipping through a skate park, alongside the more traditional images.

It ends with a quote-"Thanks Whistler for bringing the Mountain Bike community together."