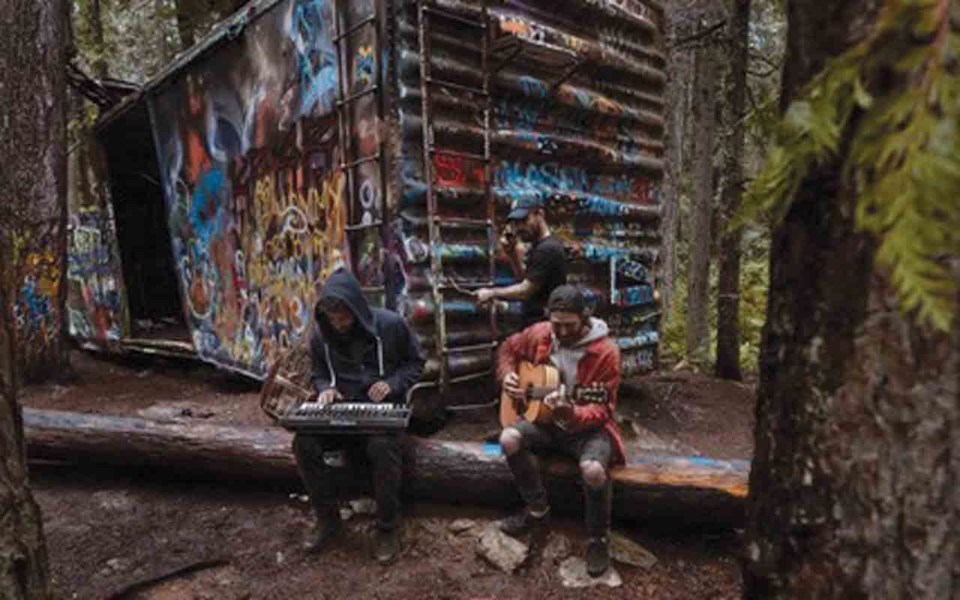 Last summer Quebec musician Jonathan Roy was on a cross-country RV road trip when he made a stop in Whistler.

After a night in one of the resort’s famous parking lots, he and his bandmates decided they wanted to go for a little hike.

“A buddy of mine was like, ‘Hey, there’s a train wreck in the woods. We could set up shop there and play some songs,’” Roy recalls. “It was a beautiful little hike—with that river and you walk across the bridge to the train cars.”

Initially, they envisioned performing and recording a song around or on top of one of the cars, but when they arrived, inspiration struck.

“We saw this train car you could get in and the sound was awesome inside,” he says. “We set up and started playing some tunes.”

On the fly, they landed on the plaintive ‘90s ballad “Iris” by the Goo Goo Dolls. “I was still reading the lyrics off the sheet as we were doing it,” Roy says. “It was really fresh. I used to sing that song as a kid; I was a big fan of them.”

Adding to the improvised element, one band member grabbed a stick and began playing percussion on the side of the car wall. He also grabbed some rocks and made a shaker. “It sounded really cool,” Roy says.

While Whistler locals might be familiar with the popular spot, through Roy’s lens—paired with his updated take on the decades-old hit—it seems at once eerie and peaceful.

The video debuted last week and already has garnered more than 100,000 views, along with a profile on ET Canada.

“It’s cool it’s getting around,” Roy says. “It’s getting some attraction.”

The singer-songwriter has had success with other videos recently too. The clip for his single “Keeping Me Alive” drew more than 40 million views and, more recently, he launched the single “Lost.” That video takes on an entire storyline, starting with group therapy.

Roy (who, fun fact, is the son of hockey player Patrick Roy) says his music has found more depth and personal resonance since he was dropped by Warner Music Canada three years ago, after he decided to head in a new direction—both musically and literally.

“I was living in Toronto, sold everything, bought an RV and lived in it for three years,” he says.

During that time, he travelled through the U.S. and Mexico before his most recent travels across Canada.

“It turned out to be all right,” he says of parting ways with the label. “It was the best decision I made for myself. I’m thankful for the opportunity they gave me, but it was time for me to go out on my own and do my own thing. I was trying to figure out who I was as an artist for a while. When I wrote ‘Keeping Me Alive’ and these songs I’m doing, I feel locked into something solid. It comes from my soul. It’s my art and my creation.”

Since the summer, Roy and his wife have purchased a farmhouse outside of Montreal with plans to stay put.

“The last couple of years I’ve really focused on who I am outside of music and really focusing on me as a human being,” he says. “[During COVID-19], I’m in the middle of the woods, I’m happy, I’m doing my thing, keeping myself busy. We’ve all had to evolve and figure things out. We decided to put content out there for people that are watching and want to see new things—keep people busy.”

To check out all of the videos, visit jonathanroyofficial.com.