Kids get the Blues

Blues Berries one of eight entertaining the tots at Whistler Children's Art Festival
Jul 14, 2006 9:21 AM By: Nicole Fitzgerald 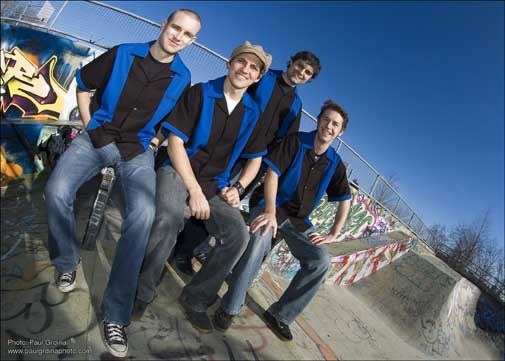 Blues Berries frontman Gordon Grdina and company will share their love of the blues as one of the mainstage performances at the 23 rd annual Whistler Children’s Arts Festival Saturday, July 15 and Sunday, July 16 from 10 a.m. to 4 p.m. at Creekside.

"We show kids how blues influences their music today," Grdina said. "We’ll move through the different styles, the history of the blues and how it influences popular music."

Grdina said one of the best examples of blues influencing modern-day bands is how heavy metal rockers Led Zeppelin were so deeply rooted in blues music, the group got sued over it. Their tracks Bring It On Home and Whole Lotta Love were very similar to bluesman Willie Dixon’s work. Dixon won, recovering royalties and copyrights for the songs.

The Blues Berries have been sharing the blues with younger generations for more than six years in schools, festivals and albums. Their first two albums, Funky Blue Diner and Little People Music , were both nominated for Children’s Album of the Year at the West Coast Music Awards. The band will have to wait and see if their third album will follow that precedent. Let’s Jam was released independently in March.

"It sounds a lot more bluesy," Grdina says of the band’s new sound. "The music was getting more modern sounding over the years, but we’ve really now gotten back to blues’ roots."

The songs are not only fun to dance to, but to learn from as well. Song titles from the Blues Berries new album include Look Both Ways, When We Share, Learning is Goodtime, I Can Do Anything, Hey There Bully, and Reduce, Reuse and Recycle.

From jump to swing to Chicago and Delta blues, Blues Berries get the crowds hopping.

"It covers a lot of emotional ground," Grdina says of the blues. "It can be really sad music. Someone getting their troubles off their chest. Other times it’s celebratory. Like all things, it’s great because it’s simplified and direct."

Blues Berries closes out the festival mainstage weekend on Sunday from 3:15 to 4:15 p.m. Eight other talented musicians, storytellers and magicians will perform over the fun-filled weekend of mainstage shows, roving street entertainment and workshops.

Saturday’s mainstage performances begin with Zuva, Vancouver’s newest marimba group, who celebrates the Zimbabwean traditions at 11 a.m. Zany Zack gets silly at 12:45 p.m. with anything that makes noise, including the guitar, drums, bass, dulcimer, flute, lute, harmonica and bouzouki. Singer Will Stroet keeps the kids singing at 2 p.m. with music and humour. The Saturday mainstage wraps up with Art Napolean, a First Nations storyteller who shares songs, mystical chants and down-to-earth humour at 3:15 p.m.

Sunday packs in another day of entertainment with Whistler’s own award-winning Soul Funktion Dancers taking the stage with tap, jazz, ballet and hip hop at 11 a.m. The Ta Daa Lady and her infamous Nylon Zoo conga line kick up at 11:45 p.m. The Eagle Song Dancers, Spakwus Slolem, of the Squamish Nation draw on their ancestors’ cultural traditions of dance and singing for a history-rich performance at 12:45 p.m. Kids can never seem to get enough of Zany Zack, so the musical magician returns at 2 p.m. for his final show.

The Whistler Arts Council-presented festival keeps the entertainment going throughout the weekend.

Street performances and mainstage shows are included in the festival entrance fee, which are $3 for kids and free for adults.