Kids take on our history 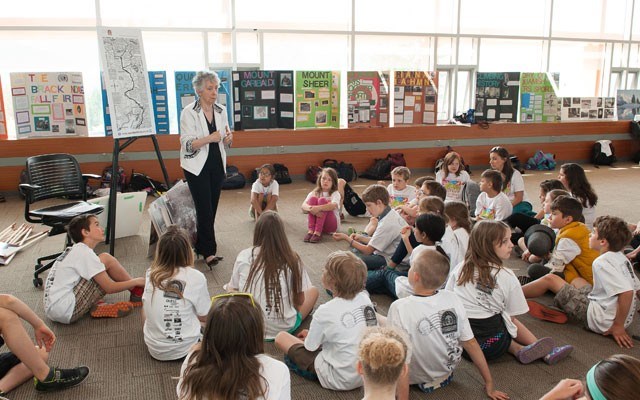 Lessons in history Children particpate in the regional science fair at Quest University in Squamish in 2015. This year, the program has expanded to include the entire corridor. photo submitted

All of us may be made by history, but our heritage also belongs to us.

This is what dozens of youngsters from around the corridor are going to explore when they take part in this spring's 2016 Sea to Sky Regional Heritage Fair.

The fair will bring together students in Grades 4 to 10 from North Vancouver to Pemberton, all of whom will have been selected from their own local school fairs for projects they've made that tell the stories of their local heritage.

Bianca Peters, president of the fair's host, the Squamish Historical Society, says the event used to be held in North Vancouver.

The Sea to Sky Regional Heritage Fair will be part of the Squamish Culture and Heritage Festival, which takes place at Brennan Park Community Centre on April 29 and 30.

This is the third Squamish Culture and Heritage Festival, which has been held every second year since 2012.

"In 2016 it is the 10-year anniversary of the Squamish Historical Society," Peters says.

"In the past we've gotten our local students involved. It's been really successful, we've had 300 kids."

The District of North Vancouver, which has previously hosted the competition, was unable to do this in 2016 and passed the baton to Squamish.

"BC Heritage came here and checked out the two festivals we'd had before and thought this was a fantastic location," says Peters.

"There is potential for it to happen here every other year in Squamish."

The Sea to Sky School District is also participating and pulling the youngsters together for the competition.

"The school district believes in us," Peters says.

"BC Heritage is also coordinating the kids' participation here... this opportunity is open to every educational facility in the Sea to Sky Region.

"We're going to take the top 60 projects of the kids locally."

Then five students participating at the Brennan Park competition will be selected to represent the entire region at the next level — the 2016 Provincial Heritage Fair in Prince Rupert. There they will join 80 student delegates from across B.C.

All costs for the students and chaperones for the Prince Rupert event are paid for by the BC Heritage Fairs Society.

And the winners from the provincial fair will go to the nationals.

The theme for 2016 is that Squamish was built on service.

And the "heritage coalition," which includes the West Coast Railway Park and the Britannia Mine Museum, will also take part.

As well, Peters says organizers are looking for 70 volunteer judges from around the region to help select the winners.

"Each project will be looked at three times," Peters says.

If you are interested in participating as a judge, RSVP via email to Cindy Rowell hfcoordinator@gmail.com before March 31 or Peters at info@squamishhistory.ca.

For more information on the festival visit www.squamishhistory.ca.