Laura Nedelak is a triple threat in ‘Modern Life’ 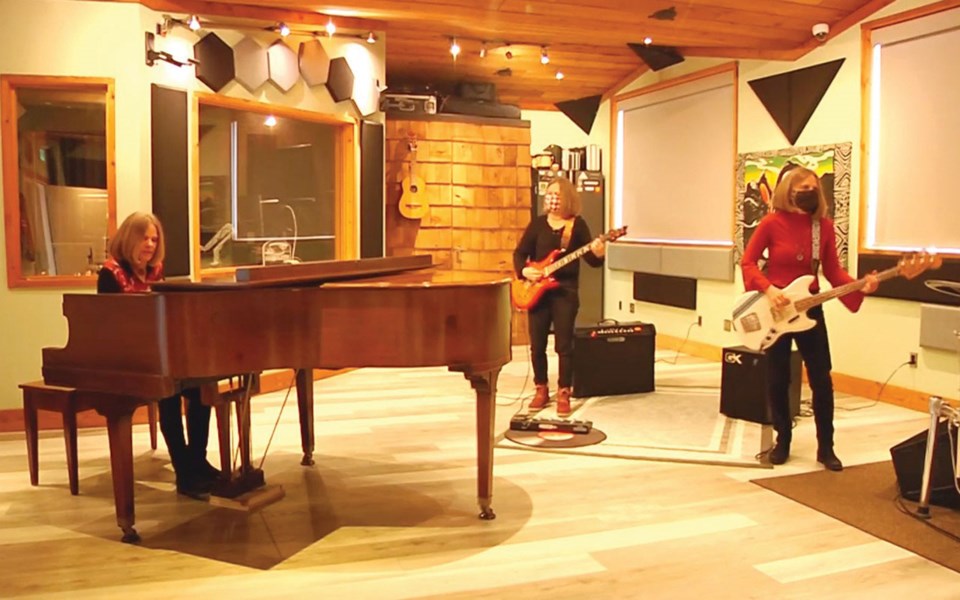 Laura Nedelak and her “band” in the video for her new single, ‘Modern Life.’ Screenshot

You might have to watch the video for Laura Nedelak’s new single, “Modern Life” twice.

That’s because during the first viewing you’ll find yourself so distracted by the uncanny resemblance between Nedelak, her bass player, and her guitarist it will be hard to focus on the song.

They all have blonde bobs, you’ll say as you squint at your screen. They all have similar builds, but these are clearly three distinct people physically distancing in masks.

If that’s the conclusion you draw, you’ve been duped (or, if you’re like me, you failed to read Nedelak’s email description of the video before watching it). And you’re not alone.

“My mom, she’s 92, she watched it and I called her the next day. She said, ‘Who are the ladies playing guitar?’ So don’t feel bad. She didn’t recognize her own daughter,” Nedelak says with a laugh.

The concept for a video that featured Nedelak on three different instruments physically distancing with herself came from her son.

“I played the song for him and his girlfriend and I said, ‘I’m trying to figure out what to do,’” she says. “They came up with it.”

Her son, Connor, also had a friend with a film degree, named Alex Bielawski, that he thought might be able to help bring the vision to life.

“He’d never done a studio music video, nor had I,” Nedelak says. “I’d always wanted to do one.”

So, they headed up to Sound & Soul Studios in Squamish for the unconventional recording and video shoot.

“It only took two hours to shoot it. There were a few too many costume changes for my liking,” she jokes.

In the end, Nedelak is pleased with how the final product turned out. But she does have one complaint.

“For two weeks while [Bielawski] was editing, I was like, ‘Damn, I should’ve put my hair behind my ears.’ When I see the bass player I’m like, ‘I look like Sia!’” she says.

Music video aside, Nedelak has spent much of the pandemic honing her chops on the instruments you see her play in the clip. She started guitar lessons and vocal lessons and got reacquainted with piano, which she hadn’t played since she was a kid.

“In April, I got a piano curbside,” she says. “I had taken lessons as a kid. I picked that up, I started plunking away … It was like riding a bike.”

Then, one day in October, she finally felt ready to write her first song on piano. Earlier in the pandemic, a friend had turned her on to the TV show Nashville, which follows famous and burgeoning (fictional) country music stars through the ups and downs of their careers.

The songs for the show’s first season were overseen by T Bone Burnett, which meant they were remarkably good, particularly for a delightfully soapy country drama.

It was enough to inspire Nedelak for “Modern Life.”

“It was really cool to see the process [for writing music],” she says. “They really do focus on that in the show.”

The result is a slow, plaintive, piano-driven track that questions the state of society and our place in it. So, far it’s resonated with locals who have heard it on social media.

“I’m so grateful to belong to this kind, resilient Sea to Sky community,” she says. “Again, I got lots of people who said the song resonated with them. People had lovely things to say.”