The visual and performing arts community in Squamish is working together to host a fundraiser to get a local artist back on his feet.
Oct 31, 2008 8:53 AM By: Holly Fraughton 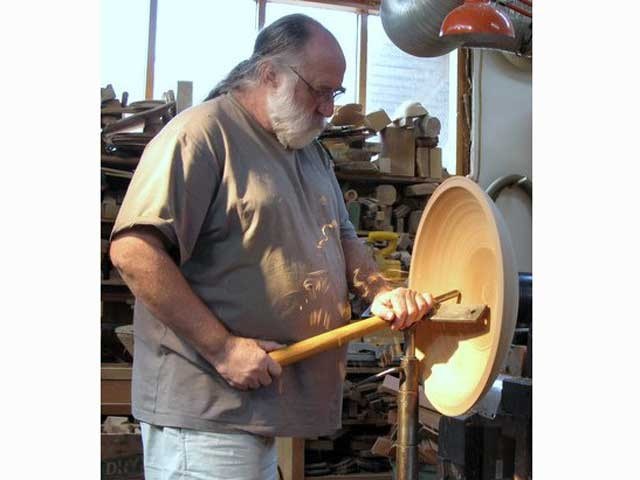 The visual and performing arts community in Squamish is working together to host a fundraiser to get a local artist back on his feet.

Martin Thorne, an accomplished wood turner and furniture maker, has lived in the region for almost 35 years, and is scheduled to undergo two knee surgeries, which will leave him unable to work for an extended period of time. So, members of the local arts community are coming together to host a two-day event at the Brackendale Art Gallery to raise money and help support Thorne’s recovery.

Wanda Doyle, president of Visuals, the Squamish Valley Artists Society, decided the local arts community needed to step in and help when she found out that Thorne had been putting off the surgery against medical advice because he was concerned about making ends meet while he was recovering.

“He can’t work as hard as he used to because of the disability,” she explained.

Visuals recently held its annual fundraiser, with half of the proceeds going to Sea to Sky Community Services. But they’ve decided instead of keeping half for their own organization, they will donate the remainder to Thorne.

“Of course, that’s not nearly enough, so we’ve decided to organize a two-day fundraiser, and that’s in conjunction with Visuals and the performing arts community,” she said.

The fundraising efforts start on Friday, Nov. 7 at 2 p.m. with the Squamish Antique Road Show, where an accredited CPPA and Canadian Antiques Road Show appraiser, Gale Pirie, will be making appraisals for $15 apiece. A silent auction and art exhibit with painter Suezan Aikins will be held that same day.

Then, on Saturday, from 2 p.m. until midnight, live music will be provided by over 40 local musicians, including the Cedar Valley School, 3 rd Octave Down, youth performers Megan Bell and Rachel Lutz, Cam Salay, Rick Morgan, Rita Kyle, The Devlins, Tessa Amy, Lotus, and Kostaman. Steve Hainsworth is emceeing the entire evening, with tickets selling for $10 for students, $15 for adults, and free admission for kids six and under.

Whistler will be depicted through the lens of local photographer, Mike Crane, on the upcoming Picture B.C. website.

The project is designed to showcase the diverse beauty of the province both to its own citizens and the rest of the world, with the site ready to launch in December 2008. The Knowledge Network, the Union of B.C. Municipalities, and the Ministry of Tourism, Sports and Arts are working on the project, which features six signature photographs for each of the province’s 160 communities.

Crane has spent years working around the world, traveling and working in Australia, Japan, France, and the U.K. before finally settling in Whistler. His work was selected by a committee, which reviewed six applications before partaking in an anonymous voting process.

“I am very excited to be chosen for the Picture B.C. project,” Crane said in a recent press release. “I look forward for the chance to take on any projects and I truly enjoy what I do.”

Selected photographers receive $500 for each photo accepted for inclusion on the Picture B.C. site. To check out Crane’s work, visit www.mikecranephotography.com .

Whistler Reads, the community’s local book group, is set to host its 20 th meeting next week.

This time, they’ll be discussing New York Times journalist Kate Hafner’s book, A Romance on Three Legs, which tells three stories, spanning 50 years of history. Chapter one explores the childhood and upbringing of Canadian pianist Glenn Gould, and in chapter two, the reader is introduced to a blind farm boy from Saskatchewan, Verne Edquist, who develops a knack of tuning pianos. Finally, in chapter three, the Steinweg family makes their way into the story.

Professor Paula McLaughlin of the UBC School of Music is a guest speaker at the discussion, which will feature recordings of Gould’s music, excerpts from a documentary about the making of a Steinway piano, and a taped interview between Whistler Reads director, Paula Shackleton, and Kate Hafner.

Organizers are also trying to arrange for the author to attend the meeting, which takes place on Thursday, Nov. 6 at 7:30 p.m. at the Whistler Public Library. Tickets are $15 and are available at Armchair Books or online at www.bookbuffet.com .