Everything in its right place 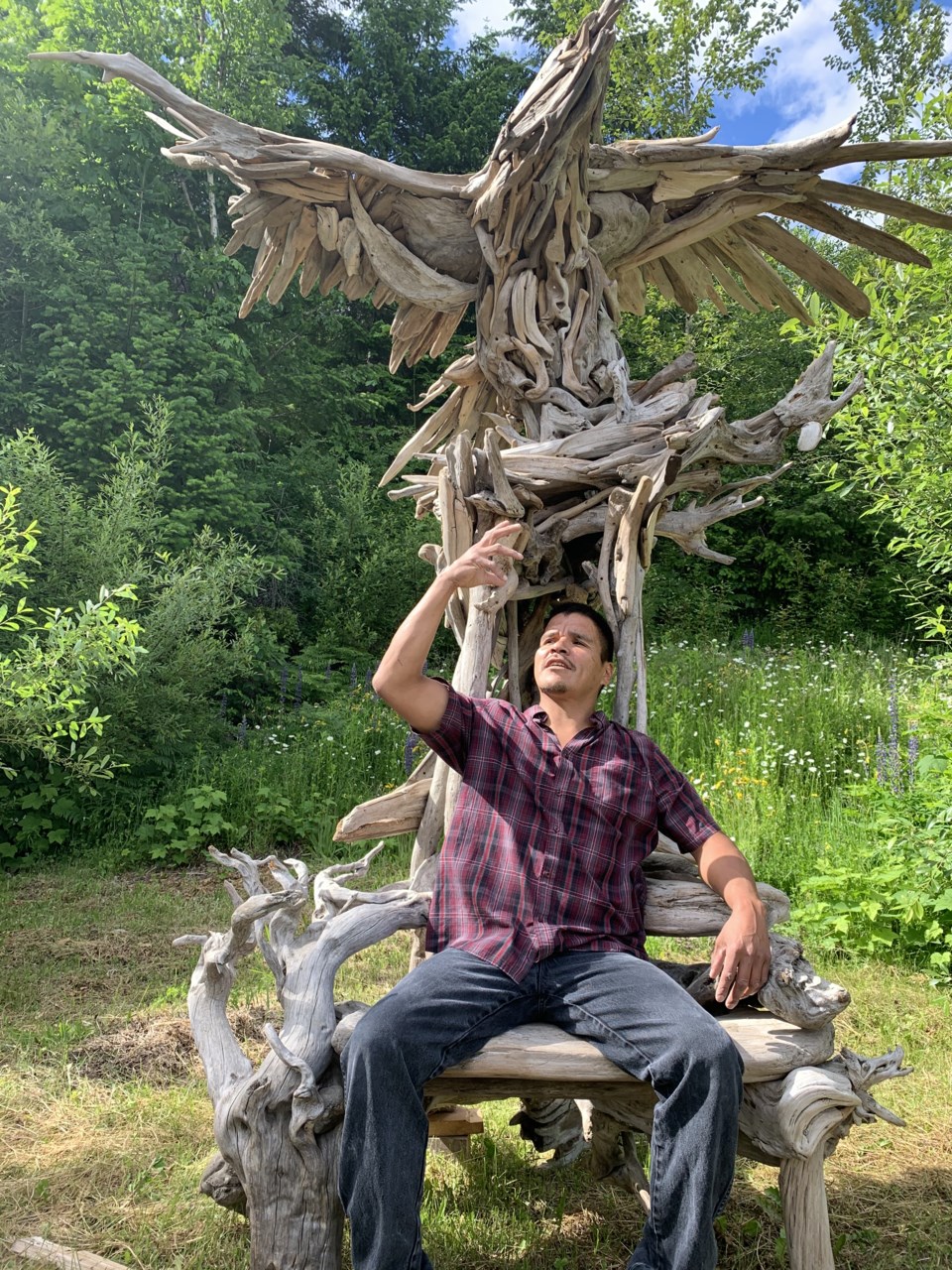 Lil’wat artist Francis Billy’s towering eagle throne was painstakingly assembled from dozens of pieces of found driftwood he refused to alter in any way, with each piece fitting in place exactly as it should. PHOTO BY BRANDON BARRETT

At the height of the pandemic-induced isolation so many of us have been feeling, Lil’wat artist Francis Billy sought an even deeper level of solitude.

So he set out for the rustic North Thompson cabin he likes to visit whenever the weight of everyday life begins to bear down. It’s where he goes to feel the enormity of nature, to face his innermost fears head on.

“Before, everyone tried to fight me all the time because I wasn’t like everyone else,” Billy explains. “I had to travel and be away from everybody and understand. To run on Mother Earth barefoot, to lift up my shirt and lay down on Mother Earth so she can give me something, and I can give something back. That’s where I let go of the hurt.”

Standing there on a raft that late May day in the middle of murky Mud Lake, Billy was afraid.

Then he jumped in.

One way Billy conveys what he’s about is through his art, and there is perhaps no work that better reflects who he is at this present moment than his latest piece: a towering throne made from driftwood, depicting a soaring eagle with a salmon clutched in its talons.

“It’s really solid. That’s how I want to build things. I want to make sure they’re solid and people understand the work that goes into them,” he says. “It’s a lot of my love and hurt and my understanding of life.”

For Billy, the imposing throne is as much political as it is personal: a reminder to the viewer of the harmonious cycle of life, the importance of allowing Mother Nature to just be as she is.

“Sometimes you do too much to something, crowd it, and then it’s not worth as much as if you just left it original,” he opines. “That’s my original story, and that’s me sitting on it right there. When I sit down on the bench, it’s my throne, so I wanted to hold it down, take care of it, and respect it.”

Made up of dozens of pieces of driftwood he either found himself or was gifted by friends, Billy says landing on the right pieces was a dialogue between him and the wood.

“Sometimes I kick over a piece or I turn it. Sometimes it’s not the right way … Sometimes you’ll see the piece way over there and it’ll speak at you,” he explains. “It’s always about the chill. If I don’t get the chill then it’s not right. I kind of have a feeling a little greater than most people. Because I’ve been through so much pain, it feels good to feel that way, instead of being beaten up or thrown around.”

Estimating he has spent upwards of 65 hours gathering and assembling the throne, Billy hasn’t altered the wood in any way. Each piece fits in exactly as it should. A prospective buyer even offered Billy a hefty sum for the throne if he would only finish it with a torch. He politely declined.

Walking around Mount Currie, Billy will sometimes notice Lil’wat walking with their heads down. He’s hopeful his work—bold, powerful and impossible to ignore—will inspire other Lil’wat to explore their own creative side.

“It’s a ripple effect. If somebody shows their artwork and that energy hits the 10 people standing around that circle, that’s what’s going to make them walk away and start their own circle,” he says.

“I like gathering people. I don’t want people to be spread out because if we’re spread out, you can easily be broken. But if we’re all together, nothing can affect us. That’s why I’m trying to bring all the artists together, so we can send our story to the future, to our grandchildren, their grandchildren. Then when they see the story, they’ll feel it, understand it, and love it.”

A condensed version of this story originally appeared in the 2020 summer edition of The Pemberton Visitors Guide.