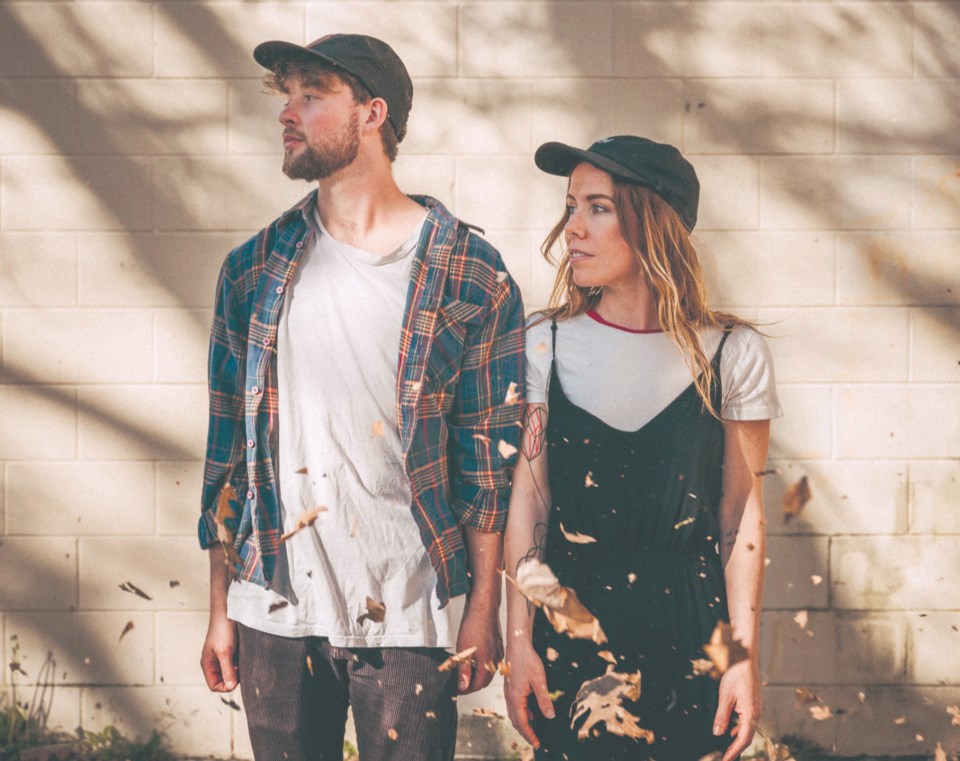 Little Earthquakes are set to hit the screen on June 5. LOGAN SWAYZE

Helen Hamilton managed to find the silver lining in a long-haul case of COVID-19.

“I think my voice has somehow gotten better,” she says. “I can reach a lower range of notes after COVID. There are some songs I can sing now that we’d normally have to change the key for.”

The Whistler musician caught the virus from a housemate back in January.

Her symptoms were fairly severe and the impact on her energy levels and lungs lasted for three months, she says. Then, just as her vocal capacity was returning, her Little Earthquakes bandmate Charlie Stenner got sick.

“We were watching each other battle our lungs back to health,” she says. “It was a really sad time, but it’s amazing now we’re both through it.”

To that end, Hamilton says she plans to do her best not to get too emotional when the duo performs as part of Arts Whistler’s The Next Level streaming series on June 5.

“If you look at our first live session in December [with the Hear and Now series], we’ve come full circle through illness and recovery since then,” she says. “We’ve come back to where we were and maybe even better. We’ve got all this gratitude that we can sing again.”

Little Earthquakes were one of five bands selected to take part in Arts Whistler’s Creative Catalyst program earlier this year—the culmination of which is a series of livestreaming shows from the Maury Young Arts Centre theatre.

The program really lived up to its name, Hamilton says.

“One of the best sessions we had was with Dear Rouge—this band from Vancouver. We just sat with them on a Zoom chat one evening and they were so lovely. They were like, ‘You just need to do it. There’s nothing holding you back here. Just write some songs and release them!’ It sounds so simple. They were pushing us away from doing covers,” she says.

Initially, Little Earthquakes invested their energy into crafting a tight three-hour set of cover songs—with their own alt-rock twist—to appeal to the bars and venues in Whistler. But when the Hear and Now streaming series required at least a few original tracks, it inspired them to get to work.

“I needed timelines and deadlines to be able to write,” Hamilton says. “It was the perfect way to get us to finish songs.”

They tackled the task by writing separately then adding to the other’s framework. “He said I write like primary colours,” Hamilton laughs. “I’m not that knowledgeable about chords. He’s got almost a classical training; he knows how to make chords interesting and song structures. He’ll come to rehearsal with a song and I can sway him to a more alt-vibe. We pull each other out of our own styles.”

They’re also drawn to different topics for inspiration. Where Hamilton is drawn to heartbreak and politics, Stenner is partial to hopeful themes.

“He does that lyrically and melodically as well,” she says. “Lyrically I’m trying to write about heartbreak. It’s what spews out of my mouth, but I want to bring in political stuff too. I feel like the similarities and differences between us unite us really well.”

Looking ahead, they hope the summer brings more opportunities to play for in-person audiences again as well.

“It’s been nearly a year since we performed for the public,” Hamilton says. “[The Next Level show] will feel like a proper show … I’m hoping it will feel like a live show. I’m going to imagine an audience. When everything is dark you can pretend you’re anywhere. It’s fun to imagine it’s a huge, full theatre of people. That will help me to step up my game.”

Catch Little Earthquakes on June 5 at 8 p.m. through links available at artswhistler.com/creative-catalyst-little-earthquakes. Find the band at facebook.com/littleearthquakesofficial.