Organizers have moved the event from the Labour Day Weekend to avoid competition with other festivals
Mar 4, 2011 7:18 AM By: Stephen Smysnuik 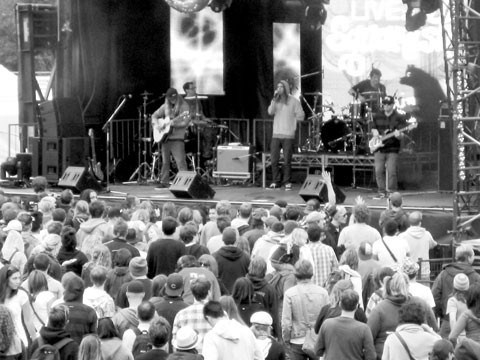 It's on! Following the success of last year's event, LIVE at Squamish will return for another year.

The 2011 festival has been moved from the Labour Day weekend and will now be held on Aug. 20 and 21.

The line-up will be announced in early April, with early bird tickets set to go on sale that same week.

Paul Runnals, executive producer for the festival, said organizers are in the process of booking the acts, a number of which have been confirmed although he wouldn't divulge who they are.

"Suffice to say, we're very, very pleased with some of the artists we've been able to secure so far and we're very confident this is going to be a compelling line-up when they see it," he said.

He said this year's event would look basically the same as last year's, with a variety of electronic and rock acts, some indie up-and-comers, as well as an artisan village and performance artists animating the festival grounds.

"We were very pleased with how things went last year," said Runnals.

"We may tweak a few things with timings and programming and stuff, but fundamentally it's going to be very much the same sort of experience.

Runnals said they moved the event forward from the Labour Day weekend to make it more accessible to the public.

"The long weekends are historically a difficult time to program things like this," he said. "Everybody's going away for the last camping trip, going down to the cabin, going down to Bumbershoot (an annual festival held in Seattle's downtown core). It's just a lot of competition going on."

Organizers had never planned to hold last year's event on the long weekend, it just happened to be the only date they could get and they didn't want to lose the opportunity to launch the festival in 2010.

Runnals said that Bumbershoot may have drawn away a number of spectators from Washington especially, who may have liked the line-up at LIVE at Squamish but stayed in Seattle instead to attend its festival. He said that ticket sales for this year's LIVE at Squamish would likely be much stronger this year by holding the festival in mid-August.

"Our intention has always been to get off that weekend and get on earlier in the month and we've been able to do that, so we're thrilled," he said.

Businesses in and around Squamish's downtown saw spikes in revenue and the event received virtually no negative feedback from the District of Squamish.