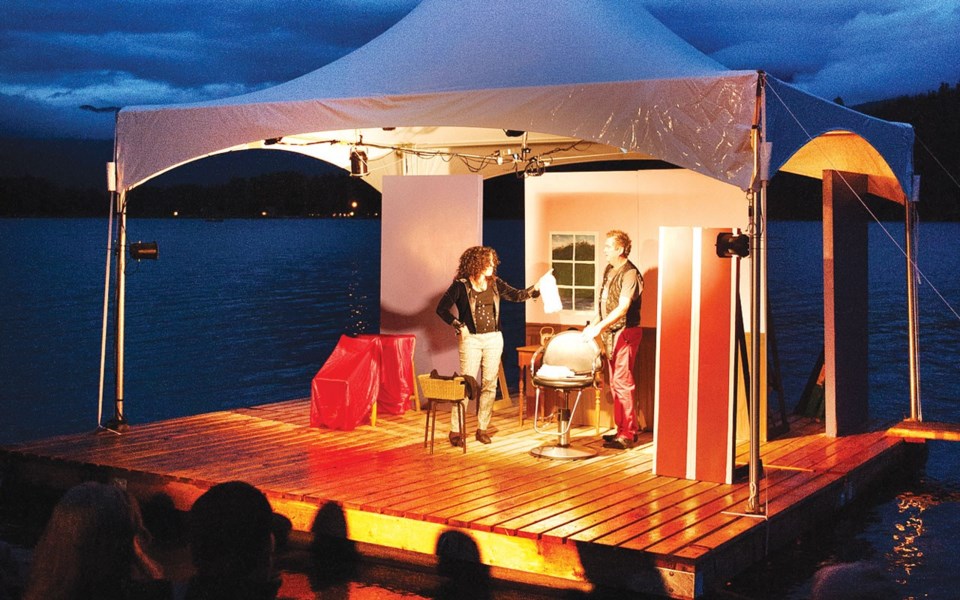 float on The Flag Stop Theatre and Arts Festival hosts a play on a floating dock every year. PHOTO submitted

"He was ... like, 'If I blow away, you'll just find me on the other side of the lake?'" recalls Stephen Vogler, festival organizer. "It was blowing wind and choppy and cool. The play that night was a struggle because of the weather, but it still happened."

In fact, only once in the festival's six-year history have organizers made the call to move the namesake theatre production indoors because of weather. It's something Vogler is thinking about as he prepares for this year's installation—which is the biggest event that The Point Artist-Run Centre hosts annually.

"The floating stage goes into place on Monday (July 30) and then we set the stage up and we pray for good weather," he adds.

Rain or shine, this year's lineup is the festival's biggest—and most diverse—yet.

On top of the premiere of the play All Relative (written by Pique reporter Brandon Barrett and Ottawa's Holly Clark) on the dock-turned-stage, from Aug. 10 to 12, festival-goers can also take in an improv show, stand-up comedy and even a "gong orchestra," to name just a few of the events.

Vogler's hope is the jam-packed lineup will prompt people to treat the weekend like an actual festival—buying full passes and attending events every day.

"That's what I want to move towards," he adds. "It's definitely the direction we want to go and that's how I hope (people) will approach it this year."

The play—along with dinner, lantern boats and a performance by Lil'wat reggae band Spiritual Warriors—will kick off the festivities on Friday, Aug. 10. Participants can also catch young actors from the Expressive Arts Theatre and Music Camp on stage at 3 p.m. followed by a performance by The Stovepipe Raccoons at 6 p.m. with dinner.

On Saturday, Aug. 11, during the afternoon participants can catch the Children's Flag Stop Theatre troupe putting on an indoor production of Pan. "Ira (Pettle, children's performer), has been working with 19 kids since May, once a week," Vogler says. "We have two productions on Saturday afternoon and they're both nearly three-quarters sold out."

That evening will be dedicated to comedy with stand-up comedian Katie-Ellen Humphries and the Vancouver Theatre Sports League. As part of the latter performance, a member of the Vancouver improv troupe will mentor local improv actors and prepare them for the show. "Then two other members will come up on Saturday and the three of them will perform with the local improv (actors)," Vogler explains.

Capping off the evening will be Pemberton alt-country band Dakota Pearl.

Finally, on Sunday, Aug. 12, The Nakantani Gong Orchestra will perform inside the lodge. Vancouver avant-garde sound artist Tatsuya Nakatani will lead the group, but Vogler has recruited about 14 local musicians who will take a two-and-a-half hour workshop before the show and perform alongside him. (He will also perform a solo set.)

"It's going to be a pretty cool collaboration," Vogler says. "They needed a venue and a curator, which in this case, is me."

If you haven't picked up on a pattern yet, most of the festival's performances feature a mentorship element—which all started with the Flag Stop Theatre Mentorship Program. Local filmmaker, director and actor Angie Nolan—along with guest mentors—has been working for weeks with a group of local actors to bring All Relative to the stage. (The American Friends of Whistler sponsored that production this year. Other festival sponsors include Bearfoot Bistro and Gibbons Whistler.)

"We commission a play and work on it as part of the mentorship program; that's a central part of the festival," Vogler says.

On top of the arts and music offerings, there will be optional dinners—courtesy of chef Karin Civitella—on Friday and Saturday night.

"It's pretty chock-a-block full of performers and events," Vogler says.

"I like to try to keep things accessible to anybody," Vogler says.

Tickets are available online at thepointartists.com or at Armchair Books.