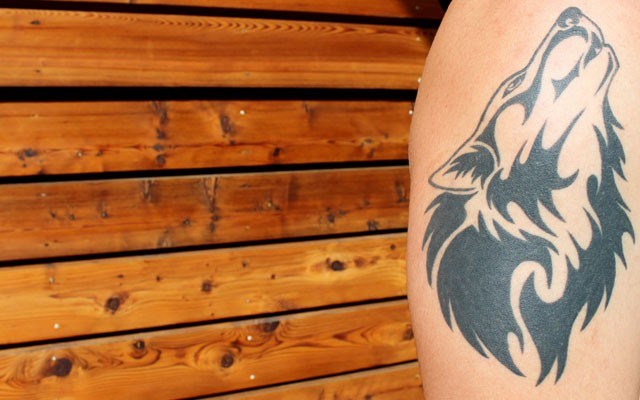 Belonging through personal symbols The Squamish Lil'wat Cultural Centre is opening Our Markings, an exhibition about tattoos and other personal expressions on Friday, April 25. Photos submitted

Our Markings, a new exhibition at the Squamish Lil'wat Cultural Centre (SLCC) in Whistler, is an important new direction for an SLCC art show.

It takes a look at both the living and historical importance of body art for the two indigenous communities that live in the Whistler area. This can be tattoos or piercings and scars, hair and other means of self-expression.

It is clear through what the curators gathered that the Lil'wat and Squamish decorated themselves very differently, historically. The show opens on Friday, April 25, with a reception at 3 p.m.

Demara Jacobs of the Squamish Nation said people were encouraged to submit photographs on social media of their own personal body art. The art of modern tattoos had a long thread back to the body art of eras long past.

"Some of it is very much related to cultural practices and history," Jacobs says. "One thing that I thought was really cool is that I got to meet the member whose work is in the exhibition."

She adds: "My portion has focused on the Squamish experience. I approached it through scholarly research and through the history books, which I don't think are an exhaustive resource. Very often they are done from a very Euro-centric point of view."

She liked one set of books called the Salish People Series, which had drawings of Squamish tattoos from the earliest times.

Women would often have their own tattoos on their insides of their wrists that acted as a kind of artistic fingerprint, showing who they were as individuals.

"I'm taking it a step further and taking the tattoos as representing the landscape. Often Vs and triangles represent mountains and this was similar to the Maori and Hawaiian traditions."

Alison Pascal, the curator of the SLCC and a member of the Lil'wat Nation, said the exhibit would be broken into three sections — the first covering Squamish Nation, the second for Lil'wat Nation art and the third is an indigenous library.

She described family masks of important spiritual significance to members of the Grizzly Bear clan were put to rest and buried when Christian churches took on greater significance in the community.

"One family buried their mask in one of the old burial grounds. We're not recreating a replica of the mask, but we have taken the idea and are using a more contemporary design of what that mask would have looked like... at the same time other groups in the community were losing their (sacred possessions), so they decided that instead of losing it they would bury it," Pascal says.

"Traditionally, the Grizzly Bear family would only bring the mask out for special occasions and they would never wear it. They would hire someone else to wear it because it would drain their strength."

Intricate hairstyling was another unique way for the Lil'wat to express themselves.

"Different hairstyles would show marital status. There were different styles for elders, for younger single people and for children."

These stylings are not used these days, Pascal added.

"A lot of people associate native people with having longer hair, but a lot of that is because a long time ago if you had done something wrong, or were from a lower status in the community, you would have shorter hair," she said.

"The cultural intricacies have been lost after contact (with Europeans)."

Artist Cory Douglas is adding another dimension to the exhibition with his work Box of Promises.

It is a white polystyrene cube carved by Douglas — whose background is Squamish Nation, Haida, and Tsimshian — and Maori carver George Nuku.

"(Nuku) had an idea of putting together a polystyrene cube. I haven't done a lot of wood carving but I have been studying Haida formline since 2006 and I was looking at expanding on my mediums," Douglas says.

Working professionally in architecture, he was used to the material as home insulation and accepted the challenge.

"We didn't look back... I told (Nuku) I was going to represent a human face in formline and he liked that. I showed him my sketch and it helped him formulate his own. George is traditionally tattooed on his body, including his face, and he wanted to have that represented," Douglas says.

"That's how we came together with a human face representing each other in the cube itself."

Each artist was responsible for three sides of the cubes and went on show at the BC Museum of Anthropology in 2013. The Box of Promises will be on loan to the SLCC for the duration of Our Markings.

"I am honoured to be a part of the show. I can't wait to see other people's pieces."

Douglas believes the Our Markings is responding to a creative renaissance in body art.

"I think it's a rebirth altogether with tattooing," he said. "The tattoo world had a negative stigmatism to it, and there's a modern following of tattoos..."

In terms of body art, Douglas himself has a tattoo with great personal significance, as a memorial to his late brother, an image Douglas created himself of a trout head design above his heart.

"My brother had passed and the family decided to cremate his body. We put is ashes in a bentwood box, which we would have traditionally done in Haida culture and possibly Squamish as well," he says.

"He was a big man. In a bigger design I used a raven to represent him and in the moon I chose a trout head design to signify the nourishment on his journey to the afterworld."