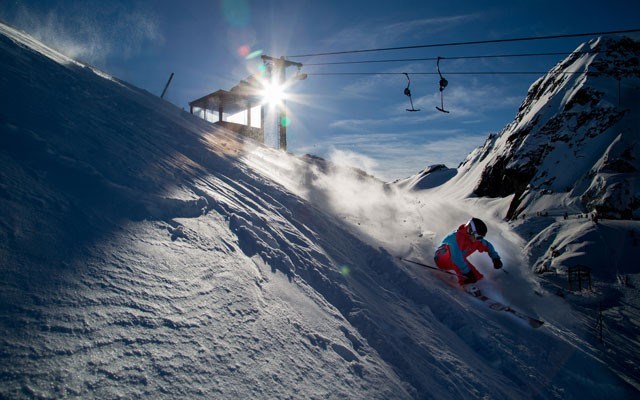 Deep Winter One of Zoya Lynch's shots from her winning presentation. Photo by Zoya Lynch

Photographer Zoya Lynch has won the Deep Winter Photo Challenge, pocketing a first prize purse of $5,000 and the right to be known as Whistler's 'Queen of Storms' for 2014, although competitors had warm, sunny weather to work in.

Lynch, a photographer from Revelstoke who specializes in backcountry work, took as her subjects three Whistler artists: painters Vanessa Stark and Kris "Kup" Kupskay, and ceramicist Vincent Massey. Her photos created a narrative that connected their work in the studio with their artistic flair on the slopes.

She immediately started planning the story of her shoot after being asked to take part in October because she wanted a unique concept and she is a "big fan" her artists' work. Conveniently they are as talented on the slopes as they are in the studio, she says.

"I couldn't believe it. I was like, 'I can't handle all this media!' I considered myself the wildcard this year so I wasn't gunning for first place; I just wanted to create something I was proud of to show to thousands of people. I was nervous about my presentation but not about winning," she says.

"It had a really great response and people seemed to connect with it. It's pretty overwhelming."

All six competitors showed their best images in front of an audience of 1,100 in the ballroom of the Fairmont Chateau Whistler hotel on Saturday, Jan. 18. They spent the previous 72 hours, from Wednesday, Jan. 15 to Saturday, Jan. 19, taking shots of their athletic teams in-bounds on Whistler and Blackcomb and in the village.

Nicholas Tiechrob was second, taking home $2,500 and Jason Hummel was third, winning $1,000. The three also each won a jacket from sponsors Arc'teryx.

The other competitors were Erin Hogue, Cameron Hunter and Chris Brown.

Hunter won the People's Choice online voting contest it was announced on Wednesday, Jan. 22, taking home $1,000 and a trip with Whistler Heli Skiiing.

Tiechrob won the best individual image and an additional $1,000.

"I loved the others. Nic Tiechrob, especially, he's just a strong photographer and filmmaker and a mentor of mine, I've talked to him countless times, asking him tech questions. I called him on Saturday before we had to hand the slideshow in because I had a question about exporting!" Lynch laughs.

"And the other competitors were awesome. It was really cool to have Erin Hogue there, just to have some more female energy."

Lynch didn't come out of the competition unscathed. She told emcee Feet Banks at the event that she'd lost her ski poles and mitts in the process of carrying out her shoot.

"It was 72-hours of shooting and then I stayed up all night editing. I had three hours of sleep Friday night and four hours on Thursday night... I was pretty much a zombie," she says.

It is Lynch's second photo competition win in Whistler in less than three months; she won the Out of Bounds: Tales from the Backcountry competition in October.

"I've gotten a bit of attention in the last few days. This will put me on the radar for sure. Out of Bounds put me on the map in Whistler because it is more of a local contest and it helped me get into the Deep Winter Contest. But Deep Winter is a bit more recognized so it's really exciting!"

So with winning back-to-back competitions, will Lynch consider moving to Whistler since the resort has embraced her work?

"I love Revelstoke, but I will come here for the competitions!" she laughs.