Indie band currently in studio with followup to their first album
Nov 2, 2016 6:00 PM By: Cathryn Atkinson 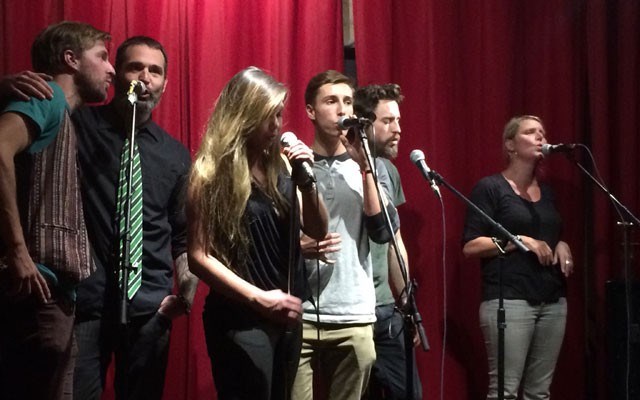 Whistler Music Search 2016 at the Crystal Lounge was, if anything, the toughest year yet to be an entrant.

More entries to the seventh annual event led organizers to add six acts in each of the preliminary rounds, with five going through to the final on Thursday, Oct. 27 as winners and wildcards.

The five — The McQuaid Trio, Chad Storm, Magik Spells, Christine Sherrington, and Susan Holden and the Groove Section — played originals and covers to a sold-out show.

When the dust settled, Vancouver-Squamish indie band Magik Spells was chosen as winner.

The band will receive two full days in Sound & Soul Studio in Squamish, plus a photo shoot at David Fornier Photography and $500 cash (the package is valued at $2,500).

Second place went to the McQuade Trio, who took home a guitar, with the first Dave Morris Memorial Award for Originality in Music going to Susan Holden and the Groove Section.

The Squamish-based drummer of Magik Spells, Joel Macleod, said the band was stoked to have the studio time since they were currently working on their second album, a followup to this year's release Elements.

He and Macleod are joined by guitarists Jacob Ayden and Jason Stafhko, and keyboardist Tyler Archibald.

"Three of us originally got together in Alberta, but when we moved to Vancouver four years ago, Tyler joined us and then Logan," Macleod explains.

"Our music is created in a way that allows it to be open to interpretation. Whatever is important to you, hopefully it will come across in the music. I don't want our music to be super black and white."

The band's first gigs were in Squamish, and Magik Spells put on a mentorship program at Howe Sound Secondary School in 2015.

"We're active in the community. The mentorship was a two-part thing — a battle of the bands and the band that won got to do a two-part workshop with our band, where we played and we gave them pointers," Macleod says.

But until the Whistler Music Search, the band had never played Whistler.

"This is one of the reasons we did the competition. We wanted to meet people, make some contacts, and then hopefully we will play there more. It would be easy to do shows both in Squamish and Whistler," Macleod says.

The band has that in-sync ability to stay on song seemingly without noticing what the other band members are doing. Macleod says they rehearsed twice a week together in the run-up to their Crystal Lounge shows.

"Our strategy was to be the best exhibition of our band under the circumstances," he says.

"We normally have a proper sound check and a light show, but we couldn't so we decided to just get up there and do our thing, play the songs the best we could.

"We like interacting with each other when we play, but as much as it's a group thing, it is also an individual performance. We're in our own worlds enjoying what we are doing. Sometimes you just have to close your eyes and let 'er go, I guess."

Macleod says he couldn't believe how many people turned out for the competition.

"Right at 9 p.m. the place was at capacity. The competition was organized and well run," he says.

"It was great and I will definitely go watch it next year. Everybody singing together at the end was a really nice finish."

Magik Spells has future shows at the Crystal Lounge, read Pique's Nightlife listings for info. Their next show is at the Knotty Burl in Squamish on Friday, Nov. 11 at 10:30 p.m.