Master of the Mike

On a mission to shake up the world Who: Mix Master Mike Where: Savage Beagle When: Friday, March 7 Any fan of the Beastie Boys would know the rap: "Three MCs and one DJ, we be getting down with no delay, Mix Master Mike what cha got to say?"
Feb 27, 2003 8:00 PM By: Dana Michell 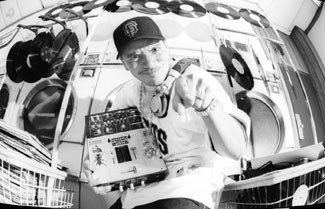 On a mission to shake up the world

Any fan of the Beastie Boys would know the rap: "Three MCs and one DJ, we be getting down with no delay, Mix Master Mike what cha got to say?"

But Mix Master Mike is more than just a DJ in the biggest rap band in the world boys and girls, he’s also the creator of the legendary Invisibl Skratch Picklz. He’s a sensational solo artist currently touring behind his latest solo album, Return of the Cyklops .

He’s the Mohammed Ali of mixing, winning more titles than any other scratcher on the planet. He’s the Bruce Lee of the turntables, scratching fluidly but at a frenetic, unpredictable pace. His tracks intertwine rockin’ beats, funked up jazz samples and hip hop artistry. He lays the tracks you know and love but cuts them up, chews on them and spits them out as futuristic sounds.

His creative craziness attracted the Beasties and was enough for Guns n Roses frontman Axl Rose, to invite Mike to open their tour. But is it enough for MMM himself? This man is a machine who’s on a mission for world domination and taking in Whistler on his path.

: Most people say that watching a Mix Master Mike show goes a lot like this: you listen, your jaw drops, you stop, wonder, think and then go nuts. How do you come up with these ideas that work everyone into a frenzy?

(laughter) Right on. I want people to hear something different. I’m totally futuristic minded so that’s my approach when I get in the studio or I’m making shit up live – futuristic and timeless. Something that’s not the norm, something that shakes you up.

: Do you practise a lot or is it all on the spot?

MMM: All the years of practising are now stored in my head so nowadays most of it is improvisational and just comes out naturally. That way bootleggers out there recording my set won’t ever get the same thing. Ha, ha!

Pique: How’s life with the Beastie Boys these days?

MMM: We’re gearing up to do shows right now actually. We’re doing the Tibetan Freedom concert in Japan and Taiwan and a festival in California called Coachella. These shows are hopefully going to give us prep for the next record.

Pique: Do you ever say to yourself "holy crap, I’m in the Beastie Boys"?

MMM: Ha, ha! Yeah sometimes but y’know it’s really just another outlet to my career. I come in three forms. There’s the crew I formed called the Invisibl Skratch Picklz, from that I hooked up with, the Beasties and then there’s my solo efforts. I give my full attention to all of them, even when I’m on my own. I’m always dropping a line that I think would suit each project and leaving shit on the Beasties’ or the Picklz answering machines and going ‘check this out’.

Pique: So what’s the difference between the projects?

With the Skratch Picklz we’re more like a group, acting like a scratch orchestra. Being with the Beasties, well they’re a legendary, world famous rap group which is an incredible experience and we’re always taking it to the next level. Actually in all three projects that’s my mission, to take it to the next level.

Pique: You sure do. As a turntablist you just finished supporting the Guns n Roses tour. How was that?

MMM: It was amazing. You’ve got a lot of rock heads, so it was like converting this whole new crowd of people and showing them what the turntables can do. It felt like class was in session for those fools out there and I was to show them what was going down with hip hop.

Pique: Where do you see turntablism going?

MMM: I kinda like where it is right now. You can buy it, you can see it but it’s not everywhere. When we start to see some crazy stupid commercials for McDonald’s or Heineken using scratching, that’s when it will become bullshit. Who knows? Maybe one day you’ll walk into a supermarket and see a DJ scratching. It won’t get me mad but I’ll start to wonder where it’s all heading.

Pique: You do a lot for the next generation. You started up the International Turntablists Foundation, you do a lot of workshops with kids. What keeps you motivated in that regard?

MMM: I guess just being true to the art, not taking it in a way where it’s all about making money. You want to show kids that there’s something else to do than getting in trouble. It’s like the whole hip hop breakdancing era, instead of turning to trouble they would break, now it’s the same approach but in a musical form. The turntable is outselling the electric guitar in some places.

Pique: What qualities do you need to be good at turntabling?

MMM: Definitely takes a lot of hand eye co-ordination but you also need a real love of all types of music. I’m not just a DJ, I’m a musical historian. Scratching comes from taking a bit of everything like jazz, old rock, hip hop and tying it in. It’s a universal art form so you need to get into the study of music. That’s what I did, I studied a lot of John Coltrane, Miles Davis and Hendrix and studied the way they played their instruments and I try to adapt that to the turntables.

Pique: You’ve won heaps of awards but what’s the title that means the most to you?

MMM: My first title, the 1992 Battle For World Supremacy in New York City. That was the highlight, to be the world champion at DJing. It made me want to battle everybody until I just can’t battle anymore.

Pique: So tell us some of the secrets behind your famous scratches?

MMM: There’s the Zig Zag which is playing the turntable like a percussive instrument and waving the record back and forth with two hands really fast, creating a zig zag pattern. It’s crazy. Something you gotta see. Then there’s the infamous tweak scratch where you turn the power off and manipulate it with your thumb.

Pique: Is it still your mission to covert people to the wonders of scratching?

MMM: My mission, my brigade is to show the world that the turntable is a musical instrument. We play the turntable as violin, drums, keyboards and everything else that’s out there.

All presale tickets to Mix Master Mike are sold out but 100 tickets will be available on the night for $20 each. It’s a case of first come, first served from 7 p.m. DJ Death Star Dub and DJ Tanner are opening.