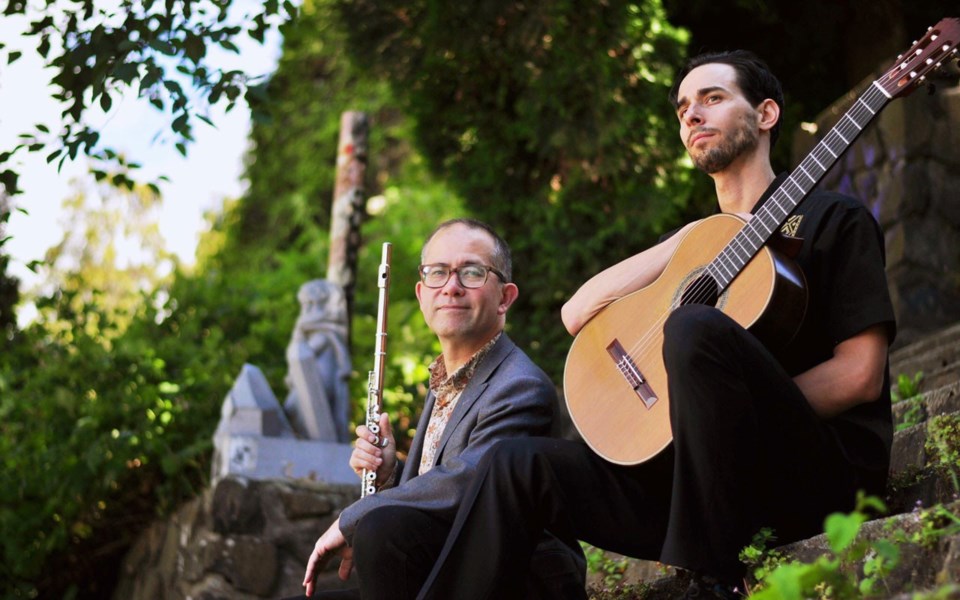 There is one big perk to being a guitar and flute duo.

Both instruments are "fairly portable," says guitarist Adrian Verdejo, one half of the McGregor-Verdejo Duo. "It's easy to get around."

"Having a lot of overlapping musical interests, we collaborated on a lot of different projects in chamber groups, as well as one-off concerts as a duo for various occasions," Verdejo says. "We got to know each other and each other's musical personalities."

Three years after they first met, the McGregor-Verdejo Duo was formed. Over the last five years, they've primarily performed their mix of modern and more traditional classical music around the Lower Mainland.

One memorable recurring gig has been for the Health Arts Society, an organization that puts on musical performances for people in residential care like hospices and hospitals.

"For us as performers, it's very rewarding because we do see the positive therapeutic results of music directly," Verdejo says. "From the audience reaction, they seem to gain quite a bit from it as well."

Next up, the pair is performing in Whistler as part of the Whistler Chamber Music Society concert series. Not only is it the first time they will play in Whistler, but it's also Verdejo's first-ever trip to the resort itself.

"Funnily enough, Mark played up in Whistler with another group in the past, but I've never been to Whistler," he adds. "I'm looking forward to it."

The performance will be a mix of classical and Latin favourites. "Some of these pieces are originally scored for flute and guitar from different eras," Verdejo says. "There will be a piece by Mauro Giuliani, who's a well-known guitar composer, a light and spirited serenade for guitar."

They will also perform "History of Tango," one of the most famous pieces by Argentine tango composer Astor Piazolla.

"We're going to play three of these movements," Verdejo says. "It's great. [It has] all of the character and lively elements of tango ... as well as elements of jazz and modern music. Piazolla music, for a performer, is quite satisfying to play."

"My experience with Mark in the last couple years, the smaller communities are typically very, very engaged, very enthusiastic, overall very friendly," he says. "They often come up and talk to us and have a lot of questions about the music, about us as performers, how we ended up together. My general feeling is smaller communities are definitely grateful for us travelling to perform for them. They have a definite passion for the music."

"Often I discuss the build of the instrument, how the instrument evolved in different parts of the world," he says. "It's such a familiar instrument. We have a selected repertoire for the guitar, which is a little more limited in the historical output, but as someone focusing on newer music, it's a great time for the guitar. There's so much contemporary music written for classical guitar."

The McGregor-Verdejo Duo play at Our Lady of the Mountains Catholic Church as part of the Whistler Chamber Music Series on Sunday, Dec. 8 at 5 p.m.

Tickets are $20 for adults and $15 for those under 35. Get them in advance at the Whistler Museum (cash only), online at whistlerchambermusic.ca, or at the door.