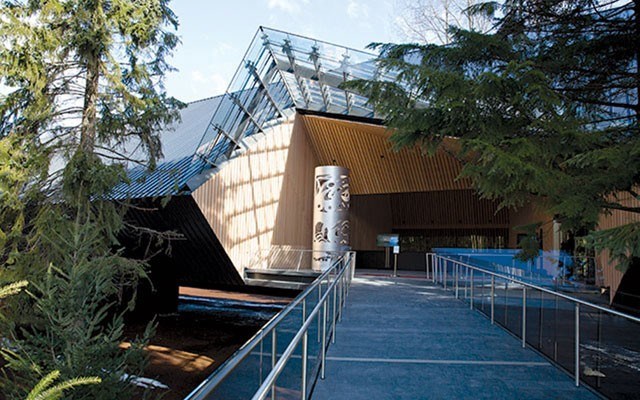 Whistler got its first taste of the sort of important cultural conversations the Audain Art Museum will bring to the resort.

Five indigenous artists and educators told representatives from some of Canada's top art galleries how to improve relations with First Nations artists, teachers and communities at a public forum at the Maury Young Arts Centre on Sunday, May 15.

The forum was part of the spring meeting of the Canadian Art Museum Directors Organization (CAMDO), which is being hosted by the Audain.

The theme of the spring meeting was art institutions working with indigenous art and artists, and the aim was to explore alternatives to improve this.

"This is an important event," said the Audain's executive director Suzanne Greening.

"We always, in our mandate and our dreams, wanted to contribute to a cultural dialogue, not only in Whistler but also throughout the Lower Mainland. I am very pleased that tonight this is the launch of a national conference... so we have visitors from across Canada."

Moderator Dr. Mique'l Dangeli, teacher and leader-choreographer of Git Hayetsk Dancers, said despite indigenous art being shown in many places never before reached, and more indigenous people holding positions within arts institutions, there remained room for improvement and reparation of what was described as a "cultural wound."

"I think a really crucial thing is the participation of indigenous peoples at all levels of activities, simply in terms of (museum and event) programming, but also to think about what it might be like to incorporate indigenous people at an administrative level, in director positions and board positions," said Boisjoly.

"Programming is crucial as it is the point where the public can come to engage and encounter ideas of indigeneity... it's about figuring out the extent to which a wider population can engage in these things."

Claxton did not want a repetition of long-term conversations and questions to address this, but wondered if a crisis was evident."This conversation has been going on for 40 or 50 years. I look out into the audience and you are all cultural brokers from a national perspective and primarily not indigenous or even folk of colour," she said.

"This isn't criticism but an observation... I wonder about the repetition of the conversation."

Dangeli noted that representatives from the Squamish and Lil'wat Nations, as well as the Squamish Lil'wat Cultural Centre were not present at the forum, and left out of the conversation, another thing that could be improved.

"Amazing concepts have been left outside the conversation," she said, adding that this showed the need for fundamental change.

As well, the treatment of historic cultural artifacts belonging to First Nations and holding the remains of ancestors in galleries and museums came under fire by the panelists.

But there are moments of progress that hint at the potential of supporting indigenous arts and culture, Dangeli said.

Earlier this year, she had a profound experience while dancing at the Agnes Etherington Art Centre in Kingston, Ont.

The centre had six artifacts from Pacific Northwest indigenous communities; Dangeli believed it was the first time the pieces had been in the presence of indigenous people from that region since they had been taken.

One piece, a carved headpiece belonging to a chief, was ultimately used during their dance after she was given permission to include it.

"For us, it created a sacred space," she said.