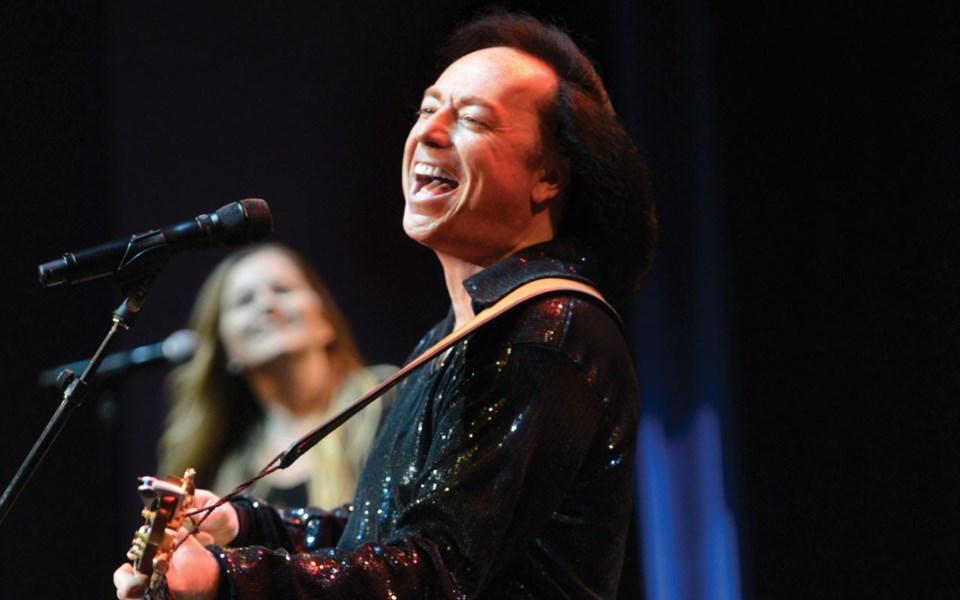 Growing up, Bobby Bruce wouldn't have described himself as a huge Neil Diamond fan.

"It was just my parents' music. I listened to it in the background of my life. I have lots of memories attached to these songs, but I was more into Elton John and Billy Joel and some of the heavy metal bands—Judas Priest, Iron Maiden, things like that, when I was growing up," said Bruce, over the phone from an end-of-summer celebration near his home on Gambier Island.

But when it came time to choose an artist to impersonate for a gig performing at a dinner theatre restaurant in his hometown of Port Coquitlam, Diamond quickly became an obvious choice.

"We could pick whoever we wanted and I was going to do Tom Jones. Someone said, 'Doesn't Tom Jones sing 'Sweet Caroline?'' and I said, 'No, that's Neil Diamond,'" he recalled. "I just opened my mouth and (sang the chorus to) 'Sweet Caroline,' and they all looked at me funny and said, 'maybe you should do him.' It was a part-time job, just a party trick, for a while, and then it was a full-time job."

Since then, Bruce has built a career performing as Nearly Neil that's spanned almost two-and-a-half decades. He's brought his tribute show to audiences around the world—including the King and Queen of Malaysia—since first embarking on a 60-show, 10-week tour of Australia in 1996 with five other impersonators, dubbed the Legends of Rock tour. He's returned to tour Australia over a dozen times, and recently returned home from performing in the Netherlands and Italy earlier this summer.

Now, Whistler audiences can catch Nearly Neil and The Solitary Band as they cap off the Whistler Presents Outdoor Summer Concert Series with a Tribute to Neil Diamond on Saturday, Sept. 8 at 1:45 p.m., as part of the GranFondo Whistler Celebration at Olympic Plaza.

Bruce's approach to his performance has changed over the years.

After his first tour of Australia, "I started to really rethink my Neil Diamond show, because I thought to myself, 'if I just keep doing what I'm doing now, I'm never going to be any better, because all I'm doing is pretending to be him,'" he said.

Bruce decided to swap out the traditional impersonation in favour of a more personal performance.

"I'm still going to keep his mannerisms and his style of singing, but I'm just going to be myself. I'm going to interject who I am into the show, and not say, 'I'm Neil Diamond and I wrote this song back in 1969' or whatever. I'll just say, 'I grew up with these songs, we played them in the motorhome,'" he explained. "It became much more of a sharing experience with the crowd. My show changed from an impersonation to a tribute at that time. Because I wasn't trying to convince the audience I was Neil Diamond, it turned more into honouring him than trying to be him."

That approach has changed once again since Diamond announced he was retiring from touring earlier this year, after being diagnosed with Parkinson's disease.

Now rather than just discussing his own memories of Diamond's discography, Bruce also makes sure to mention the legendary artist's longstanding legacy.

"You can't deny he's a good songwriter, because it's not just one or two songs, there's a lot of them that are big hits," he said. That includes crowd favourites like "Sweet Caroline," a tune that has, "a life of its own," Bruce said. "I can tell you it's the most requested song I ever get ... I can't get away without playing it, that's for sure. Most of the time, I play it twice."

While Bruce aims to provide audiences with "the essential Neil Diamond experience," crowds shouldn't only expect Diamond covers. Bruce's setlist is also peppered with other well-known hits. Some are from the same era, while others are Canadian classics. Bruce also tends to include a handful of more modern songs, from artists like Bruno Mars and LMFAO. "We try to mix it up and give the audience an array of everything," he said.