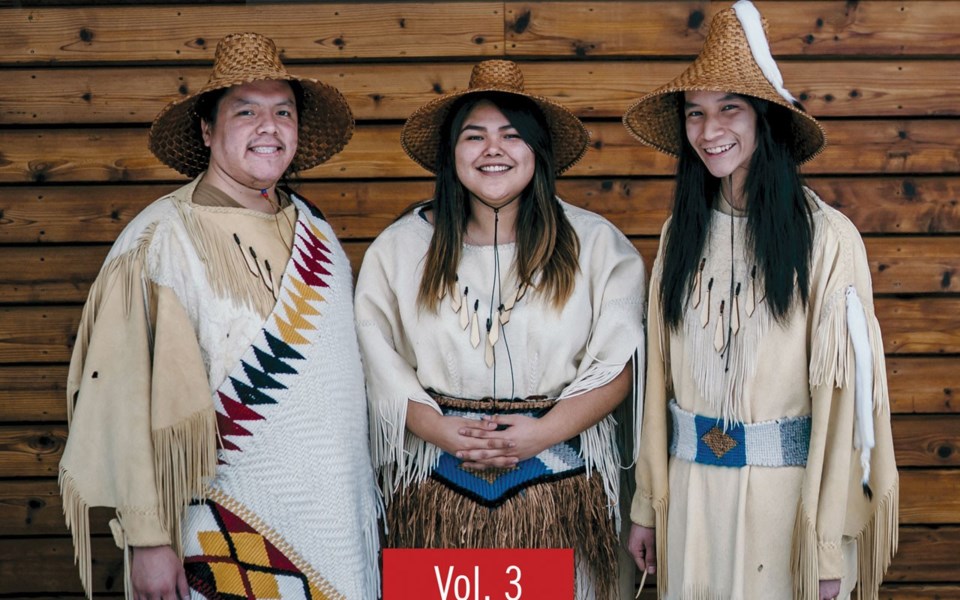 Songs From Our Nation Vol. 3 is available now. Photo by Val St-Arnaud

The Squamish Lil'wat Cultural Centre (SLCC) is celebrating the release of a new album.

While the centre—and all of the Squamish and Lil'wat singers and drummers featured on the CD—hoped to have a launch party, thanks to COVID-19, that will have to wait.

"We were in discussion of maybe wanting to celebrate, as a lot of us that were part of the project never had that type of experience before," said Te'c Georgina Dan, who has worked at the SLCC for the last four years and is featured on the album as one of the Lil'wat singers.

"I was very emotional [when the album came out]. I didn't see myself being part of something so big. I never realized when recording it that I'd have so many emotions towards this project. But I feel that it's not just for myself, it's for those that are learning to sing the songs."

To that end, ambassadors have been handing out copies of the album in their communities—with children at the daycare centre in Mount Currie and school kids from the Squamish Nation already hearing some of those traditional songs.

Dan says while she grew up listening to and singing some of them, the project gave her a chance to delve more deeply into the language. Knowledge keepers and elders from both nations gave permission for use of the songs and helped mentor the singers and drummers as well.

"I first started lead singing when I started working at the SLCC years ago," she says. "One of the songs that stuck to me and helped me start learning to sing was called 'Working Song.' I grew up with it as 'The Women's Working Song,' but the one on the album has language in it that acknowledges the role of both men and women—because the work that a man does can't be finished without the women in the household, and vice versa. I never heard that song with some of the traditional language in it before it was brought to us by people who translated it."

For A7xwil Travis Billy (from the Xaxli'p Nation), who oversaw the Squamish Nation tracks, song selection was a mix of old and new. "The first song we all agreed should be on the album was 'Salmon Song,'" he says. "It's a really fast-paced song, it's really upbeat. We can get a lot of people going. It's a good song altogether."

A huge honour, though, was having his own song—"We Remember"—featured as well. "I didn't think that was going to happen," he says. "I didn't think it would ever be recorded. I'm happy they asked me for that."

Once the songs were selected and rehearsed, the drummers and singers went to Monarch Studios in Vancouver to record.

"It was a very different scene from what I'm used to when I'm singing the traditional songs," Dan says. "I found that it was very weird to record it and then just hear myself. When I'm singing the songs with other people, it fills the room. We all felt that way, so it was a bit comforting having the help of people who have done this before."

While Billy has experience recording music, it was more the content that presented a challenge while recording.

After singing each song in the studio three or four times over the course of a day, the team went home thinking they were finished with their contributions. Only, a week later, when Billy was sent the songs, he learned three of them had been recorded incorrectly—in part because of the translation challenges.

"I ended up having to go to my cousin who is a language teacher," he says. "I said, 'OK, I need your help.' I needed a recording of 'Salmon Song,' so he sent it to me and said, 'You're singing it wrong.' ... I was going through recordings I had and my cousin had. We sat there for an hour and went back and forth. Then I went back and recorded it."

With the finished product now in their hands, Dan says she's hoping it will reach more people.

"I feel relieved that it has been done and that it's more than I expected it to be," she says. "But I definitely would love to have more people listening to it and learning from it."

Copies of Songs From Our Nation Vol. 3 are available now at shop.slcc.ca/shop/cd-songs-from-our-nations-volume-3.