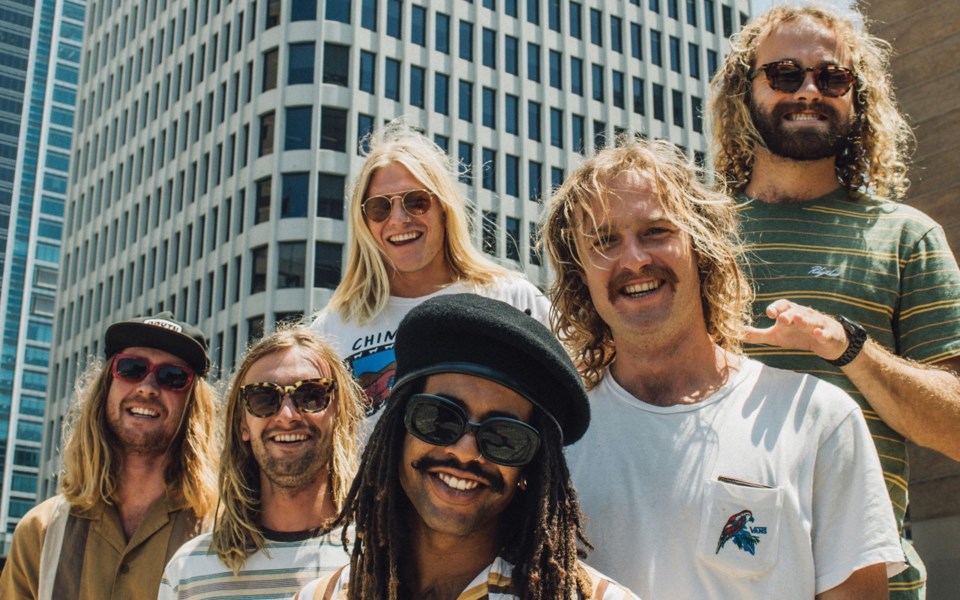 It's fair to assume so do all of the members of Ocean Alley and their crew, but Galbraith is the one stuck fielding a phone interview on the band's day off in California.

"I'm sitting outside. We're up the road from our giant tour bus that sleeps 12 people," he says. "It's a nice bit of luxury on the road, but there's no shower on the bus ... I haven't had a shower for three days, so when I get off this phone call, I'm going to go have a shower in the hotel."

A lot has changed since the band was touring North America last year at this time. Until recently, for example, they packed into a tiny van. But now they've sold out shows around the world, played massive festivals, and even landed on Triple J's Hottest 100 Poll in their native Australia for their single "Confidence" in January. (They earned 2,758,584 votes, which was an all-time high for the fan-voted music poll.)

To get a sense of their meteoric rise, consider that there was so much demand for their May 30 show in Vancouver at the Imperial that it got moved to the Commodore Ballroom.

"One surprise was probably that Vancouver room," Galbraith adds. "The Commodore is the biggest venue on the tour and it's on its way to selling out."

In other words, it might be wise to find a way to get in to their two sold-out shows at the GLC on June 1 and 2.

"I don't know if we could do four nights at the GLC," Galbraith says.

The psych-rock band is from Sydney, so their popularity in Whistler might not be all that surprising. But still, Galbraith has a warning for the audience at their shows.

"Expect a fuckload of Aussies," he says. "And watch out for the Australians because you can't trust them. The people of Whistler know they can't trust Aussies."

They can also expect to hear both older songs and their latest single, "Stained Glass." It's the first single since their second full-length album, Chiaroscuro.

While they're still enjoying their jam-packed tour schedule, not having time to write new music might be one downfall of being so busy. Typically, all six members sit down to write "spit balling ideas and tinkering around with instruments" then head into the recording studio to polish the tracks before recording them.

"Maybe three months of this year will be at home," Galbraith says. "We all have really fun hobbies back home. When we're back there, even for a short time, it's easy for us to recharge."

Although, perhaps detracting from that rest and relaxation, they're also recognized more often at home. "We're more popular in Australia than in other parts of the world," he says. "In New Zealand we get yelled at on the streets. It's fun. We love it ... All that stuff—people stopping to get photos—is part of the job. It makes people happy and we're not going to take that away from them."

Ocean Alley plays the GLC on June 1 and 2, but both shows are sold out. On their website, the venue says they may release more tickets closer to the date. Keep an eye on www.facebook.com/GLC.Whistler.