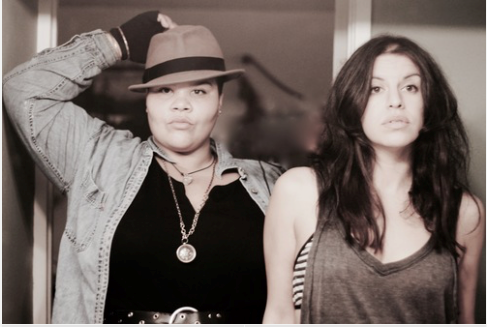 But then they remember the chance encounters in Vancouver that have helped give them a leg up.

"Chelsea (D.E. Johnson) and I have had the conversation, 'Would we be better off in Toronto or Montreal?' ... I don't know if we would've stuck out in Toronto in some ways," says Lola Whyte, vocalist and electric banjo player with the band.

One example of that? The powerhouse pair—who mix soul with rock 'n' roll—was playing a show at The Cobalt in the heart of East Van when CBC arts reporter Andrea Warner happened to be in the crowd. That chance encounter led to Old Soul Rebel being named one of Canada's "11 Best New Bands of 2016."

"I think that was one of the first little jumps we got as Old Soul Rebel," says Johnson, singer and electric guitar player. "We were working with CBC that whole year. We were playing instrumentals on the morning show and coming to just chitchat. It was our first real big support. It also pushed us to be like, 'OK we're on to something here.'"

Johnson and Whyte first started making music together back in 2015. While they were from different backgrounds—Whyte is Indigenous and Johnson is African American—they found the stories behind their songs were a natural match. "There are a lot of lines that cross," Johnson says. "The music she writes I feel in my heart and the music I write, I think she feels in her heart too. More and more we're writing songs together because of our musical partnership, our experiences are getting closer."

Earlier this year, they were featured in an episode of CTV's The Launch, a reality show in which music industry experts choose one undiscovered artist and help "launch" their career.

"We had our moments where we were like, 'Whoa, what did we get ourselves into?'" Johnson says. "Charlotte, the casting director was such a support. She walked us through it. Also, The Launch is run by all women too. Like with anything, there were moments it was cool."

That experience might have been a mixed bag, but the highlight of their year so far happened on June 5 when they were invited to perform as part of Women Deliver 2019—a conference on gender equality and the health of women—which took place in Vancouver.

"It was such an honour to be invited, to be considered two of the artists on the frontlines who have an understanding of where we need to go in order to reach equality," Whyte says. "Our songs are story telling of our experience. If you're listening you can hear how we were shaped and where we're coming from."

Local audiences will have a chance to hear those stories when Old Soul Rebel plays in Squamish at the Backyard Après concert, put on by Gibbons Whistler, on Saturday, June 29.

It wasn't that long ago the band had travelled up the Sea to Sky for a gig, Johnson adds. "The World Ski and Snowboard Festival was the best hospitality we ever had," she says. "They decked the green room out with every type of food on our rider—then went so far to make gluten-free cake for us ... And then to see the snowboarders do their jumps was cool too. It was a fun scene all around."

Backyard Après takes place at Norman Rudy's from 2 to 9 p.m. on June 29. Tickets are $55 to $90. To purchase them and to see the full lineup visit backyardapres.ca/.