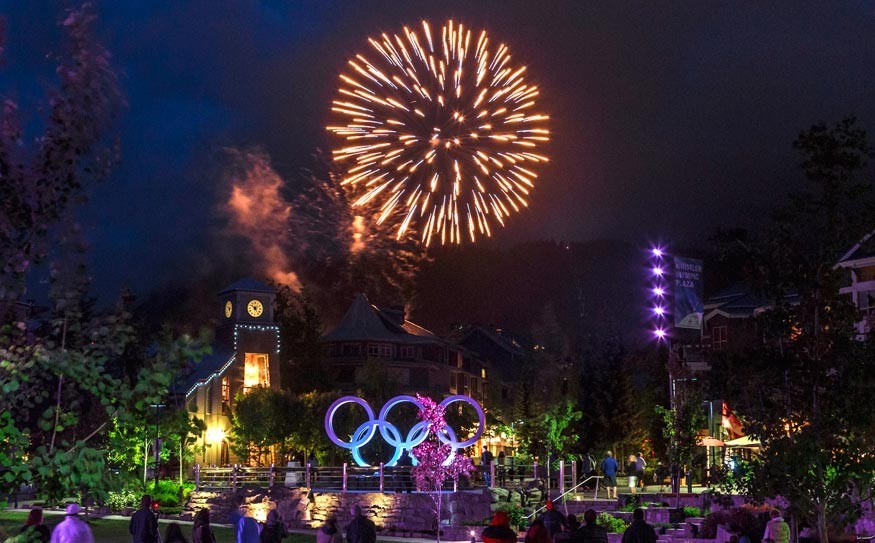 winter kick-off Start the season with fireworks and festivities this weekend. Photo by Joern Rohde/joernrohde.com

Look up. Look way up! Those are some beautiful snow-capped mountains and this weekend they're officially beckoning winter shredders. Yes, opening weekend — in all its play-hard, party-hard glory — is here, along with a slew of American visitors enjoying their long weekend. (Happy Thanksgiving, guys!)

There's also a ton of fun to be had on lower ground. Concerts, the annual Bizarre Bazaar and Bratz Biz, even a late-season festival are all running through the weekend. To help you navigate the busy winter kick-off, Pique put together a list of suggestions for Sea to Sky events this weekend. Welcome to winter!

Mixing spoken word with music and theatre performance, Creative Eclectic 5 launches its winter season Friday with performances by jazz player Simon Stribling from New Orleans Ale Stars and Jordan White of She Stole My Beer and FOMO. Host and founder Stephen Vogler will also perform some spoken word, along with Rajan Das. "I like that area where different arts cross over, such as music and poetry and theatre and comedy and even visual art," says Vogler, who started the event two years ago. "I thought this would provide something different in terms of the entertainment available in Whistler. It's grown into a kind of cabaret-style event that includes an open mic portion later in the evening."

Admission to the show, which takes place at Dusty's Bar at 9 p.m., is by donation.

Or head to the Whistler Sliding Centre for the Viessmann IBSF World Cup Bobsleigh and Skeleton competition. There will be a special fireworks display at the Sliding Centre at 9 p.m.

Mountain Life Magazine is hosting its winter edition launch party at the Garibaldi Lift Co. with the premiere of Reflections — Art for an Oil Free Coast documentary, along with a DJ set by Whistler artist Chili Thom.

The theme for this issue: The end of the world. Doors open at 8:30 p.m. and tickets are $10 with proceeds going to the Raincoast Conservation Foundation — in hopes that the Apocalypse is not actually looming.

Squamish is hosting two events to entertain: The Vancouver International Mountain Film Festival is screening its Best of Fest Ski Night — that's two and a half hours of ski films — at the Howe Sound Brewing Company in Squamish at 8 p.m. with doors at 6:30 p.m. (If you're in town Thursday, they're also showing the Best of Fest Climbing Night.) Catch an evening of thrilling, top-notch ski flicks to get you amped for the season. Tickets are $15 at the door.

The inaugural Squamish Culture & Heritage Festival, meanwhile, offers talks and workshops about the rich, storied history of the area at Quest University Friday and Saturday. Archeologist Rudy Reimer, hailing from the Squamish Nation, will kick off the event talking about his research on indigenous settlements dating back 5,000 years.

There will also be hands-on seminars teaching headband and basket weaving and woodcarving. Learn about the annual Brackendale eagle count, railway history and Squamish climbing pioneers then check out footage and pictures from decades past. For more information visit squamishhistory.ca.

Cozy up and hear local author Janet Love Morrison read from her new novel Friends, 6 Women, 6 Cultures, One Humanity Friday at the Pemberton Library at 10 a.m. and again at the Whistler Library at 7 p.m. She will also be signing copies of the novel at Armchair Books Saturday from 1 p.m. until 3 p.m.

Enjoy live music, a silent auction and over 100 booths filled with art, jewelry, Christmas decorations and other artisan crafts at the 24th annual Bizarre Bazaar Saturday and Sunday. This year, over 100 booths — with half carrying work by crafty sea to sky artisans — are expected to draw a crowd of over 5,000. And for the first time, Bratz Biz, a market with arts and crafts handmade by 31 kids from ages six to 17, will be held in conjunction with the bazaar. The events run from 10 a.m. until 7 p.m. on Saturday and 10 a.m. until 3 p.m. on Sunday at the Whistler Conference Centre. Entry is by donation with funds going to the Whistler Children's Art Festival.

Whistler's own Ali Milner returns to share her lovely, lilting vocals as opener for Halifax singer-songwriter David Myles. The award-winning performer — most recent accolades include male artist recording of the year at the 2012 Music Nova Scotia Awards and the SOCAN award for folk/roots music — will perform songs from his fifth album, Into the Sun, an upbeat collection that gleans inspiration from Brazilian and African music. (See our full story on page 93.) Tickets for the Millennium Place show are $25 or $23 for seniors and students, available at artswhistler.tix.com.

Who doesn't enjoy a fireworks display? To mark the start of the season, the Resort Municipality of Whistler will set the sky ablaze at the foot of the mountain near Skier's Plaza at 7 p.m.

If you head north to Pemberton you can enjoy a sampling of local Pemberton talent at the fifth annual MADE event — that's Music, Art, Dance and Expression — at the Pemberton Community Centre Saturday at 8 p.m., presented by the Pemberton Arts Council.

"This isn't a quiet, introspective art exhibition," organizers say. "It's lively celebration of creativity." Local right down to the beverages — featuring drinks from the Pemberton Distillery and Whistler brewing — admission (which is 19+) is by donation. For more information visit pembertonartscouncil.com.

Day two of Bizarre Bizarre and Bratz Biz at the Whistler Conference Centre. You will find over 100 booths — with half carrying work by crafty sea to sky artisans.

It features a wide array of ceramics, clothing, fine art, wood, glass, metal, jewelry, leather, candles and aromatherapy products as well as Christmas decorations. Hours are 10 a.m. to 3 p.m. with entry by donation.