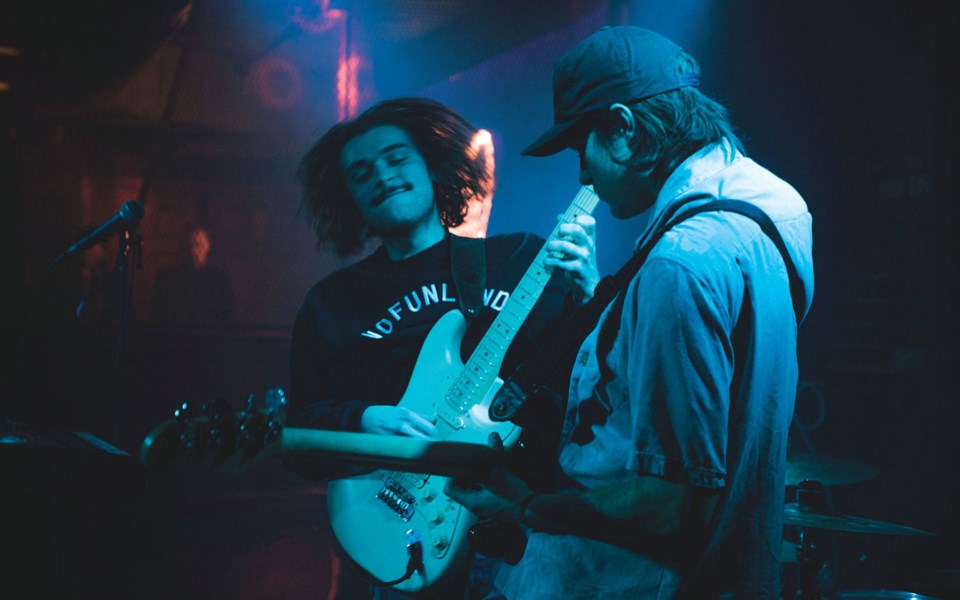 Out East are set to release their debut EP. Photo by Jessica Nicklen Smart/ submitted

We might have all had ambitious projects when the world first went into lockdown earlier this spring, but how many of us followed through on our to-do lists?

On that front, Squamish musicians Adam Ravalia and Jon Allan can count themselves among the elite few.

Throughout quarantine, the duo picked away at self-producing and recording their four-song debut EP under the name Out East, a nod to their Newfoundland and Labrador roots. And now He’s is ready for its July 3 debut on all streaming platforms.

“I’d call it atmospheric pop. It’s a little tough to pinpoint a genre. I haven’t been great at that,” Ravalia says with a laugh.

But the album is exactly that. Filled with hazy synth and peppered with airy harmonies, back-to-front, it serves as a perfect sunny summer day soundtrack.

“Wasted Afternoon,” in particular, is a standout. Its sing-songy “I’m not alone anymore/ I’m not alone,” refrain deftly toes the line between melancholy and hope.

“We wanted to take a DIY approach,” Ravalia says. “We recorded everything from home. It was really nice. We all know how tough it’s been—especially in the earlier days of the pandemic when the weather was shitty—there’s only so many Netflix specials you can binge. To say, ‘We’re going to take today and work on this song or vocals.’ It became part of our routine until these songs were finished.”

(Don’t worry: Ravalia lives with Allan’s partner and early on they committed to being in each other’s “bubbles.”)

“Coming from the East Coast, I played in bands in the St. John’s music scene for years and years,” Ravalia says. “Everyone knows everyone, everyone goes to each other’s shows, everyone plays in multiple bands. There are shows every night of the week.”

Around three years ago, Allan made the move to Squamish. Last year, Ravalia took the plunge and moved cross-country to Vancouver and then, in September, decided to call Squamish home.

The move was “to be a little closer to the band in Whistler and also the natural beauty of Squamish. I’m pretty into mountain biking and hiking. It feels like home,” he adds.

“The band,” he refers to, meanwhile, is up-and-coming garage-rock outfit Lazy Ghost. Allan first hooked up with the Whistler group after answering a “bass player wanted” ad on Craigslist.

“Then I moved out here and met the guys,” Ravalia says. “I play keys in the band. They didn’t have a keyboard player, so I started jamming with them.”

Making that connection has been a solid entry point into life in the Sea to Sky.

“First and foremost, it’s a really good group of people. These guys are some of my best friends outside of music. Then just going through the creative process with them, we’re working on a Lazy Ghost EP right now. It’s been a great exercise for me as a musician—to grow and flourish—specifically in my keyboard playing,” he adds.

While Lazy Ghost’s tours around North America and to Australia have been cancelled this year, before the pandemic, Out East had a chance to test their material and hone their chops opening for the band a couple times.

“That allowed us to steer the direction of our tunes and figure out how we’d do the duo thing in this setting,” Ravalia says.

In the meantime, Out East might be holding off on any touring to promote their new release, but they have their first gig in several months at Howe Sound Brewing on Wednesday, July 8 from 5 to 7 p.m. (The full gig runs with other musicians in a socially distant format until 9 p.m.)

“In terms of silver linings, we’ve been able to focus on writing new music,” he says. “All of a sudden, I’m part of two bodies of work being released over the summer.”