Whistler artist Andrea Mueller launches classes for kids and adults
May 21, 2020 2:00 AM By: Alyssa Noel 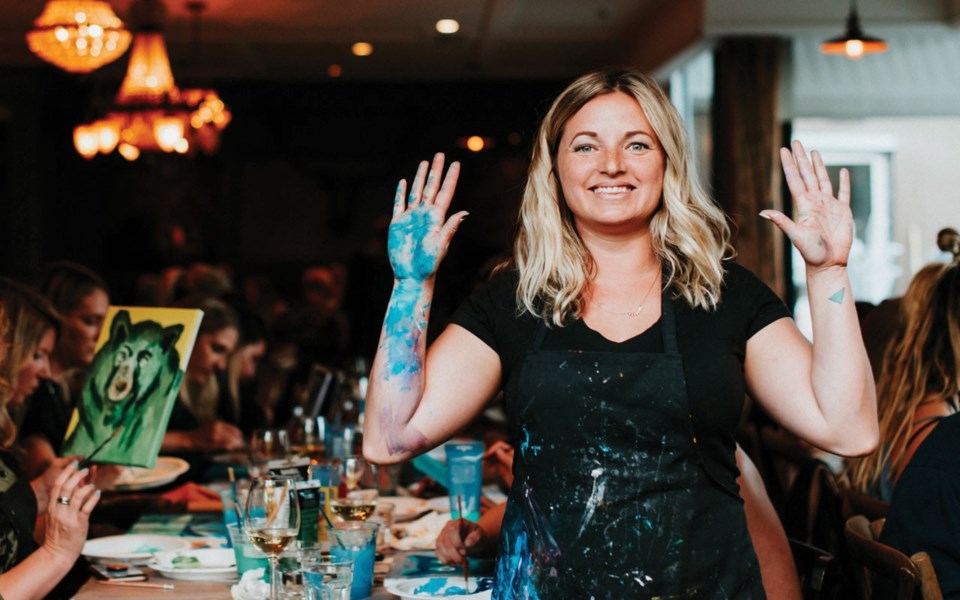 Andrea Mueller is set to move her popular paint night online. She is also launching art classes for kids. Photo by Darby Magill

Let's be honest: there's only so much Netflix you can watch.

If you're ready to expand your pandemic hobbies beyond binging, Whistler artist Andrea Mueller just might have the solution for you.

"This is different [than in-person paint nights] in that I'm teaching the same thing to everybody," she says. "I'm going to do it on Zoom. It will be step by step with Q and As as we go along."

Having just moved house and set up her new studio, the first event is set to take place with just 12 students on Thursday, May 28.

Everyone will be working on the same textured night landscape, but there is room for some artistic interpretation.

"It's fun because it's freeflow for the background," Mueller adds. "You can be pretty experimental. You'll be able to use a toothbrush to create stars or a sponge from the kitchen—stuff from around the house."

One potential hurdle is students should have their own paints and brushes of any type, but Mueller said she could potentially help order some if need be.

"I do have canvases, so they can buy canvases and pick them up at my house," she adds.

She decided to create a sliding donation scale for the classes in hopes of making it as accessible to as many locals as possible. It ranges from $15 to the "comm'on that's too much" price of $75.

"I don't want to leave anybody out," she says. "Yes, of course, it helps support my family, but, at the same time, I really want to give back to people and I want people to feel they can be creative and provide them with the tools to do that and help them build confidence. I think it's important we exercise our creative minds. That's why I offered them in the past."

To that end, Mueller is also hosting four weeks of her first-ever art lessons for kids.

"I don't normally do kids' classes because it's harder to find space for kids in Whistler," she says.

In planning the program, she reached out to a Whistler moms Facebook group to find out what age range of kids would be interested and what time of day they would tune in.

As a result, the classes will focus on seven- to nine-year-olds (though Mueller can accommodate kids as young as six or as old as 10) and take place on Wednesdays at 9:15 a.m. for 45 minutes.

"I'm pretty excited to do it," Mueller says. "I'm excited to connect with the kids in Whistler. I think that will be really nice. Maybe in the future I can do some in-person classes for kids. It will all be depending on the space I can find."

In the meantime, the classes kicked off on May 20 and run until June 10 with week one and two tapping into imaginative projects with supplies from around the house and weeks three and four focusing on painting and honing skills learned in previous weeks.

"I'm hoping it gives parents a bit of a break," she says. "We'll see how this all works. I want the parent participation to be very low."

To sign up for the adult class go to https://andrealikesart.com/collections/paint-nights/products/virtual-paint-night-thursday-may-28th-at-7pm-pst.

For more on the kids class go to andrealikesart.com/collections/paint-nights/products/kids-paint-ages-7-9-four-wednesdays-9-15am-pst-may-20-june10.