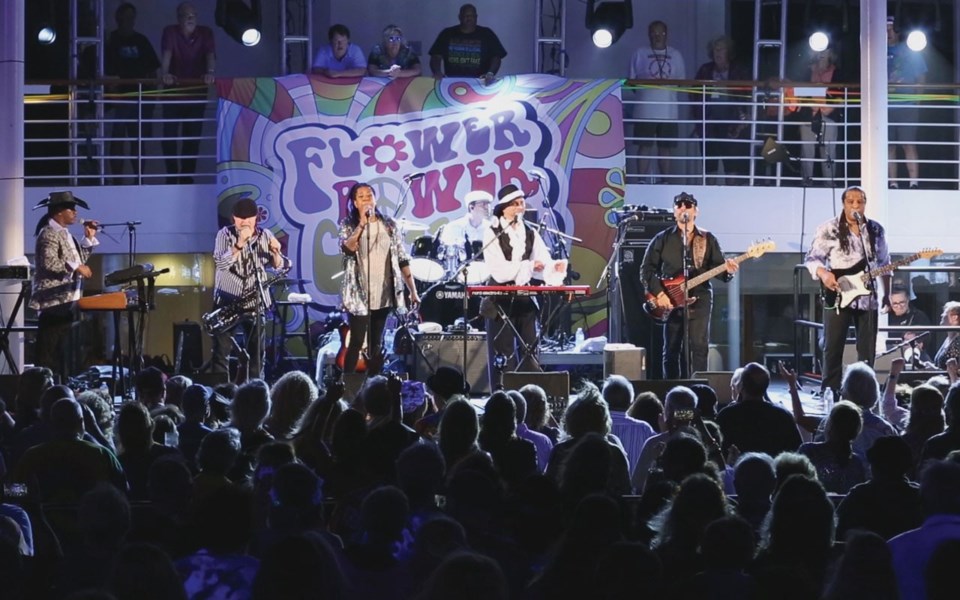 The first major American rock group with a multi-racial male and female lineup, Sly and The Family Stone were light years ahead of their time. The iconic funk-rock band plays Olympic Plaza on Aug. 31. Photo submitted

When the members of Sly and the Family Stone were first approached to play Woodstock, the festival seemed more like an inconvenience than anything else.

"Woodstock was something that none of us thought was going to be like that," says Jerry "Papa J" Martini, saxophonist and original founder of the Rock and Roll Hall of Fame band. "It was kind of a pain in the behind. It was hard to get to. I was knee-deep in mud. We waited in a tent for six hours."

It was 3:30 a.m. by the time the band finally hit the stage. It wouldn't take long for them to realize something special was underway.

"That whole electric thing that happens between half a million people and a band made the hair on my arms stand up," Martini recalls. "It was amazing to feel the energy between our band and all those people. There is an actual physical thing that happens if you're connecting with that many people. It's something I could never forget."

The nearly hour-long set is still remembered as one of Woodstock's most iconic moments, capped by a transcendent, 10-minute performance of "I Want to Take You Higher." Already one of the hottest acts in the country off of their 1969 sophomore album, Stand!, the performance cemented Sly and the Family Stone as one of music's boldest—and most progressive—acts.

The first major American rock group with a multi-racial, male and female lineup, the band was anchored by Sylvester "Sly" Stewart, a talented multi-instrumentalist and lead vocalist.

"He was a very visionary person," Martini says. "If you listen to the words, there were a lot of songs that he wrote that were never big hits, but they were his favourites. Our first album was actually a failure nationally. It did well among some musicians, people like Miles Davis and Herbie Hancock. They loved his writing. His words were unlike any words of the contemporaries of his time."

But Sly's boundary pushing didn't always jive with the music industry's cookie-cutter vision for the band.

"He was so far ahead of his time that it was hard to survive the music business people. They go, 'Well, can't you do it a little bit more like The 5th Dimension or somebody else?" Martini says.

By the mid-'70s, his drug problems and in-fighting within the group effectively ended the band in its original form. The Family Stone has continued on under various lineups, but Martini acknowledges replacing the enigmatic singer is an impossible task.

"There's no way anyone could ever fill Sylvester Stewart's spot, it's impossible, but what you want to do is get the picture that he was trying to paint and get that over to as many people as you can and keep it going," he says.

These days, The Family Stone is primarily made up of second-generation players like Phunne Stone, the daughter of Sly and the band's long-time trumpeter and vocalist, Cynthia Robinson, who passed away from cancer in 2015.

"Sly's music is going to last a lot longer than any of us, so what I've done is have three people under 45 years old in the band that are just amazing," Martini says.

Now helmed by lead vocalist Russ "Swang" Stewart (who Martini casually mentions he met "at B.B. King's house"), Martini says it's important that anyone who joins the band grasps the bigger picture of what Sly was trying to accomplish.

"It's not the individual, it's the music," he says. "That's why sometimes I have to let people go because they develop what I call LSD, which is Lead Singer's Disease. Because we go over so well in most places, people start to feel like, 'Well, geez, I'm a bad mofo.' And you are, or you wouldn't be in the band ... but we're just carrying it on and people just have to be humble and realize the fact that people are there to see us, but they're also there to listen to what I consider some of the greatest pop music of all time."

The oldest member of the band, Martini says that, despite his age, "I can still jump around the stage a little bit. The young people bring out the youth in you.

"It's going to keep going, and we keep doing well," he adds. "We're never going to be the original Sly and the Family Stone, and I wouldn't even try. But guess what? I'm 76 years old and I'm having a ball."

The Family Stone plays a free show at Olympic Plaza on Saturday, Aug. 31 at 7:30 p.m. as part of the Whistler Presents Outdoor Summer Concert Series.