Party hard, sure, but what does it all mean? 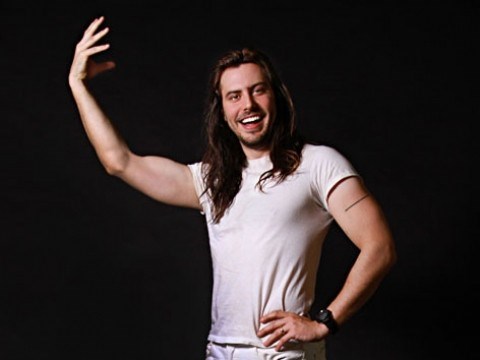 Andrew WK is big in Japan. And he's about as baffled about that as anybody.

But consistently, for the past decade, the Japanese have ardently eaten up whatever A.W.K. has tossed their way. And with enthusiasm, one might add.

"There's a great amount of enthusiasm in general in the culture," A.W.K. says in a phone interview from his home in New York City, "so people are enthusiastic just about being fans at all. You can be a fan of being a fan there. There's a whole culture of 'being into stuff' there."

Most of what A.W.K. does is based on that kind same kind of energy. Culturally, it was a perfect match - a head banging, charismatic rock star thrashing out songs about partying hard, feeling good and never going to bed.

The meat-and-potatoes approach to rock is out of synch with the man himself. He's an eager reader of philosopher Martin Buber and Jean-Paul Sartre. He's far (far, far, far) more philosophical than one might think of a man who charged into the mainstream with songs like "Party Til You Puke."

"It almost seems like a basic human instinct to find a way to understand or at least value every experience you go through. It might not be possible, or maybe it's a silly thing because we want to find meaning, because maybe there isn't meaning sometimes. And I like that idea too," he says.

"My main goal is to have my mind engaged and to be blown away. I want to find out about things that I didn't know about and I want to consider ways of life or modes of thought that I couldn't have conceived of before. That's an exciting way to approach the world so far, just being in a state of your mind being blown."

A.W.K. is best known for his brand of good-time, party-hard rock anthems, epitomized on his 2001 album I Get Wet. Songs like "Party Hard" and "She Is Beautiful" tapped into the frat-boy paradigm of the late-teens/early-20s. With that album, A.W.K. seemed to both satirize and pay tribute to the rock gods of his native Michegan, MC5, The Stooges, Alice Cooper and Ted Nugent. Critics either panned him or loved him. Either way, I Get Wet sold well.

His next few albums...not so well. His 2003 follow-up The Wolf, on which he played all instruments, repeated the same tricks as its predecessor, to limited fanfare. His next album, Close Calls with Brick Walls, was delayed release in North America over a bitter dispute with his ex -manager.

Close Calls was finally released in 2010. Now, four years removed from the time, place and headspace in which it was recorded, he says listening to it is "a bit strange."

"It just sounds like I can't relate to it. It's a very strange feeling, but that's also exciting to me. I like being kind of humiliated by my own work because it's extraordinarily motivating. It's good to have that kind of crushing ego death," he says.

His career so far has been marked by experimentation, even if his best-known work doesn't betray it. Sure, "She Is Beautiful" is meat-and-gravy rock-and-roll, but his lesser known albums, including 55 Cadillac - an all-piano instrumental album showcasing his prowess on the keys, released in 2009 - and Gundam Rock - a cover album of music from the Gundam Japanese anime series, also released in 2009 - are indicative of a restless young man, addicted to new experience and throwing himself into the wide open void.

"That's become a good thing to do in general," he says. "It's the dialectic. You've got to come up with something first so you can then go against it."