Schoolhouse and homestead cabin to be reconstructed and rehabilitated by fall
Mar 5, 2021 10:00 AM By: Alyssa Noel 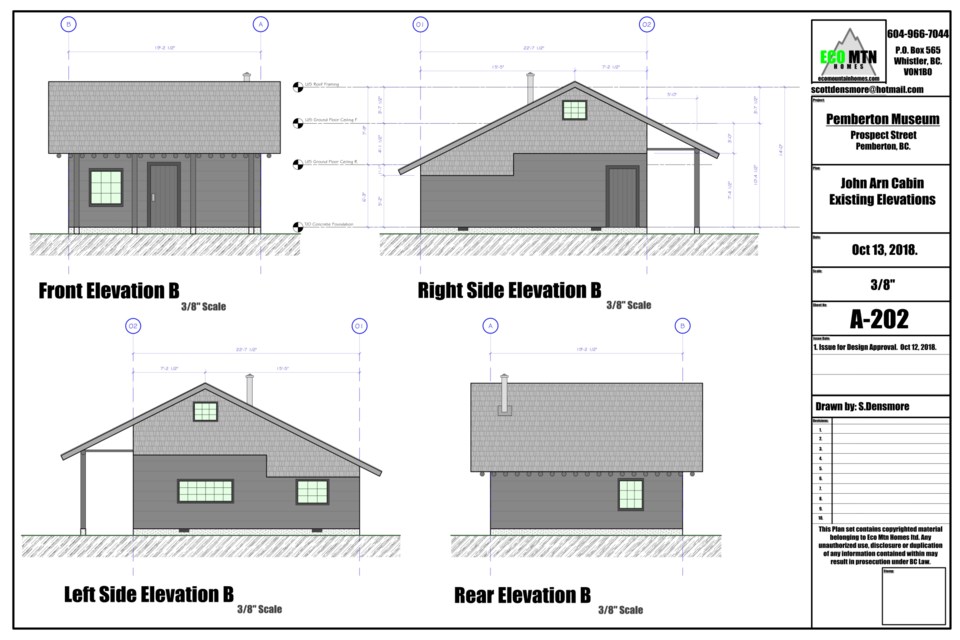 An engineer’s drawing for the John Arn cabin built in 1907. It will be rehabilitated for the Pemberton Museum. Photo submitted

The COVID-19 pandemic has been hard on cultural institutions like museums—and the Pemberton Museum has been no exception.

So when the local museum learned recently that it had been awarded $127,844 in funding from the Community Economic Recovery Infrastructure Program (CERIP) Unique Heritage Infrastructure stream, it was a welcome surprise.

The funding will allow the museum to reconstruct and rehabilitate two historic buildings—the John Arn cabin built in 1907 as a pioneer homestead and the Pemberton Station School built in 1929 as a one-room school.

In 2018, after receiving federal funding from a Canada Cultural Spaces grant, the museum set to work. It had the structures assessed by engineers and learned the schoolhouse wasn’t going to meet the engineering requirements for a public space. To that end, it will be reconstructed as a replica.

“The John Arn cabin is a log cabin, so it will be dismantled and put together again with an engineered roof,” Madigan says. “Both buildings will be on engineered foundations as well.”

The cabin won’t be heated and will be used for farm equipment storage. The schoolhouse, however, will be heated and used for school and community groups as well as events.

“It will totally change our operations. Right now people think there’s a big thing going on at the museum because there are so many buildings, but only two have heat. One is administration and one is a storage building. It’s very tight. It was difficult to bring school groups in once the weather turned at the end of September. So it totally opens up the site until December when we get big snow,” Madigan says.

The project had stalled due to the COVID-19 pandemic, but the museum was set to continue work in March before the new infusion of funds.

“Without funding, we weren’t sure how far we’d get,” Madigan added. “But with funding, we can do both buildings and have them ready by the end of summer to take advantage of the fall period.”

The funding was part of the province’s $10 billion COVID-19 response, which includes the Stronger BC for Everyone recovery plan, according to a press release. In that release, Paul Gravett, executive director of Heritage BC, said the recognition of the sector from the province meant a lot.

“We could not be happier to have this recognition and support from the province,” he said. “Through this funding program, the province not only provided the largest one-time infusion of funds into the heritage sector, but it also recognized the importance and potential of heritage infrastructure and its place in our province’s economic future.”

“There hasn’t been a lot of opportunity for provincial funding for heritage—unlike Ontario or Quebec or Alberta,” she said. “So this was major. I really wanted to thank the province for seeing the value in funding heritage—especially in these COVID times. It’s very difficult for museums across Canada.”