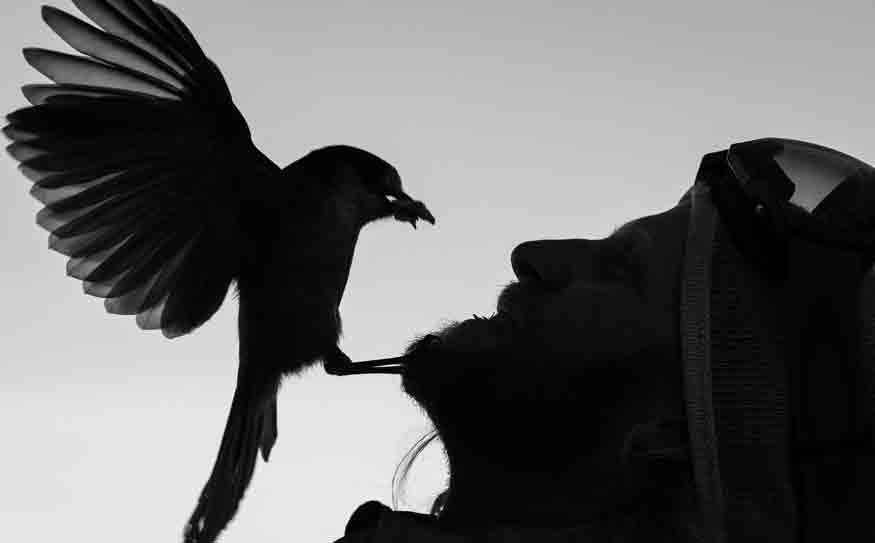 winning shot Russell Dalby's photo of a Whiskey Jack was just one of many images that made up his award-winning slideshow. Photo by Russell Dalby

The sold out audience of around 1,200 erupted into equally loud hoots when Russell Dalby's silhouette image of a Whiskey Jack, wings spread wide, perched on someone's chin to steal a morsel of food from their mouth, flashed by.

"Everybody takes Whiskey Jack photos, but the way everything worked out, that ended up being pretty cool. That's maybe one of my favourites," says Dalby.

He was one of six professional photographers to take part in this year's competition, which sent shooters out into the elements of Whistler Blackcomb with 72 hours to capture enough compelling images to create a slideshow. The submissions were presented at the Fairmont Chateau Whistler on Saturday night to a crowd that included a panel of judges. They unanimously chose Dalby as the winner of the first-place $5,000 prize and the King of Storms title.

Dalby's entry was entirely black and white images that transitioned from action on the mountain to musical offerings in the village, set to an upbeat soundtrack by Colorado indie-folk band The Lumineers. A winding amp cable, for example, turned into snowboarders carving their way down the mountain.

While Dalby knew he wanted to come up with a unique concept for the competition he was worried he might have skewed too far from the conventional, he says. "I've done some slideshows before and I always focused on the snowboarding or skiing, but I realized you can tell a story and make it totally different than everybody else's," he says. "I was worried mine was too different, but I guess they thought it made sense."

Considering his big win, that's a bit of an understatement. Eric Berger, one of the judges, says while the competition was stiff this year, Dalby had the whole package.

"Everyone did a great job, but the top three did an exceptional job," he says. "It almost comes down to splitting hairs. Russell had a concept and it was well executed. There was a theme there. He not only exposed the mountain culture side of it all, but the lifestyle culture with The Hairfarmers being such an important band in Whistler then tying in all these visuals. I thought it was clever."

Dalby has been a photographer for a decade, but he's been shooting fulltime for the last two years. Originally from Newmarket, Ontario, he moved to Whistler in 1997 to live in the mountains and pursue his love of snowboarding. A few years later he developed a passion for photography as well. Since then, he's become a staff photographer at King Snow Magazine and for Monster Energy.

This was the first year he was invited to compete in the Deep Winter competition. "This might sound bad, but I never thought I'd do it because it seemed like three days of crazy hard work and maybe (I'd get) nothing out of it. But when they called I said, 'Yes' and figured I'd come up with something after," he says.

So, he began to plot. He enlisted the help of snowboarders Dan Treadway, Joel Loverin and Colin D. Watt (and, later, guitarist Andrew Campbell and editor Clayton Larsen) to capture on the mountain, but the idea to incorporate music-based photos into the show came to him in his quest to create an original submission. While he laid out specific photos he wanted to get both on the mountain and in a studio, the shots he snapped by chance rounded out the entry.

"In between we'd see something and shoot it," he says. "There seemed to be a lot of those times. I got the shots I wanted, but half of them didn't go into the show. The stuff you see along the way by chance, that's what made it. If I had only got the shots I wanted it wouldn't be very good."

Case in point: the stunning Whiskey Jack image. "That was a fluke," he says. "But if there's any food around the birds are going to swoop in and get it."