Punk-rock rom-com Fall Back Down premieres in Whistler 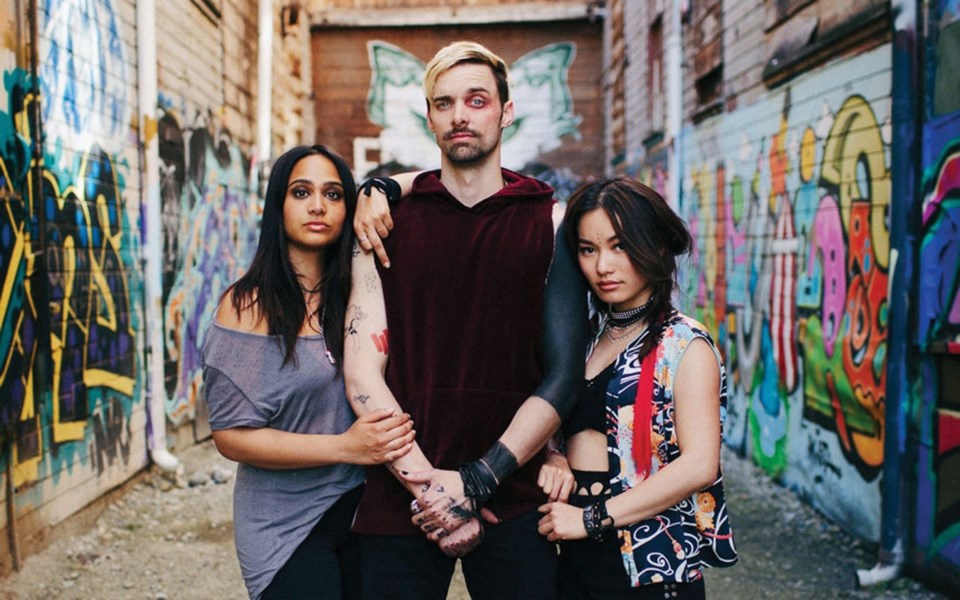 Andrew Dunbar (centre) stars in Fall Back Down, premiering at the Whistler Film Festival. Photo submitted

Andrew Dunbar has learned if you're a clean-cut actor who wants to play a Black Bloc punk anarchist, you have to go out and make it happen.

The Vancouver actor stars in Fall Back Down a "punk-rock rom-com" making its world premiere at the Whistler Film Festival on Dec. 5.

"S.B. [Edwards, the film's writer and director] saw some punk rock inside of me instead of a normal-looking suburban dad," Dunbar says with a laugh. "You get pigeon-holed into a type. I wouldn't have gotten an audition for this role if I hadn't met S.B. a long time ago and worked with her."

The film centres around Nick, Dunbar's character, who was a dedicated activist with his girlfriend Lizzie by his side. But when she leaves without a word on a humanitarian trip to Nigeria, he falls into a depression and becomes complacent in every facet of his life.

When he meets a young, uptight South Asian woman at his job at a garment factory, a spark is lit inside him again. One day, the pair witnesses a workplace murder that's covered up as an accident and have to grapple with how to proceed. Just as they start to grow closer, Lizzie shows up, throwing Nick's life into further disarray.

"S.B. just did an interview a couple weeks ago and they were trying to remember another punk-rock love story where it was in this realm," Dunbar says. "They didn't think of anything. They were saying this might be Canada's first punk-rock rom-com love story. It is a romantic comedy, but it's set in the punk rock activism world."

For her part, Edwards penned the script about a decade ago and shopped it around without much luck. When she and Dunbar (who has a laundry list of movie and TV credits to his name, including Dragged Across Concrete, Arrow, and Leprechaun: Origins) first met around three or four years ago, and the two began to brainstorm on three projects they hoped to create. Eventually, they got Telefilm funding for Fall Back Down, Dunbar stepped in as a producer, and, a decade after it was first conceived, the film is set to screen for an audience for the first time.

"I'm a producer on it, so I've seen it 100 times, but a lot of the cast, it will be their first time," he says. "It's super exciting and nerve wracking and all that."

But Dunbar won't only be in Whistler for the premiere; the festival has also named him one of their Stars to Watch. As part of that program, he and three other actors will receive professional development from casting directors, filmmakers, producers, and development executives throughout the festival.

"It's not totally my personality to be walking a red carpet, but it will be fun and get me talking to some other cool artists," Dunbar says. "I looked up who had been there before, and it's a cool club to be part of."

For tickets or passes to the film festival, visit whistlerfilmfestival.com.