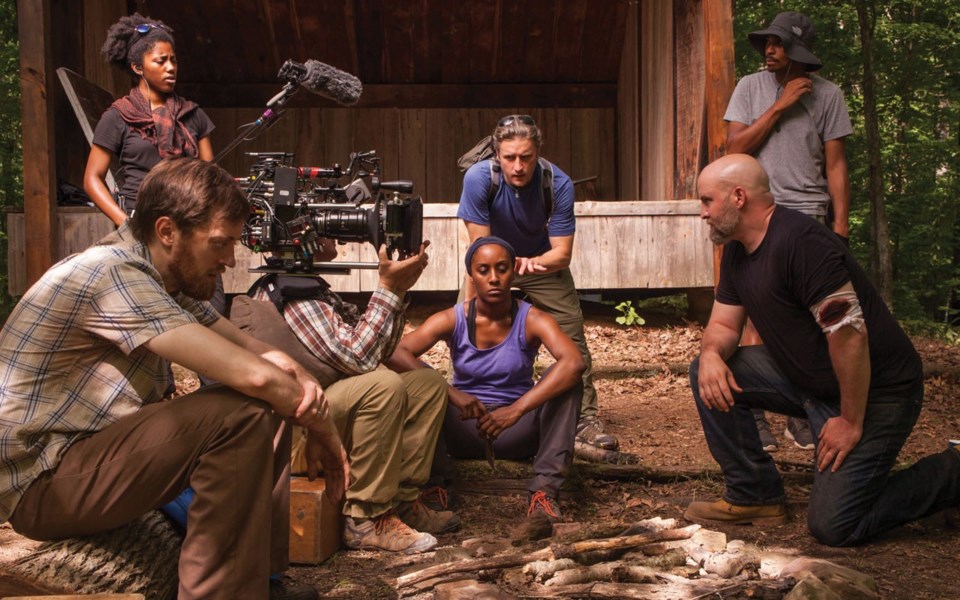 A behind-the-scenes look at Ranger Runners, which screens at the Whistler Film Festival on Dec. 7 and 8. Photo submitted

Devon Colwell and his wife were hiking a small section of the 3,500-kilometre Appalachian Trail when his wife made a comment that instantly changed his perspective on outdoor recreation.

"I've always had a secret fantasy of doing the entire Appalachian Trail—dropping everything and doing it," he says. "She made a comment: 'I could never picture myself doing that.' And that sparked me putting myself in her shoes."

It wasn't that she couldn't do the hike or even that she didn't want to, but rather she talked about the idea of being a woman alone in the wilderness on the trail. "I never considered the idea of the safety of being alone," he says.

From that new outlook, Colwell began to think about writing a film script.

At the time, he and his writing and business partner with Fatal Funnel Films, Philip S. Plowden, were in the midst of developing a different film, but instead they shelved that project and began to brainstorm what would become Range Runners.

"Devon came to me and said, 'I have this idea for a survival thriller,'" says Plowden, who directed the film. "I grew up camping and the idea was appealing to me ... We were able to take that idea then hash it out into a screenplay ... [and] we could shoot for less money than the other one we were working on."

In the end, Range Runners tells the story of a long-distance runner named Mel (played by Celeste M. Cooper) who attempts to run the entire Appalachian Trail, but encounters two men who steal her backpack that contains all the items she needs to survive. She is faced with turning around and giving up or chasing them down and reclaiming her dream.

"When she gets everything taken away from her and has to find a way to move forward, she immerses herself and actually finds strength in her surroundings," Colwell says.

In total, the crew spent 16 of 18 days shooting in the woods in Southern Illinois—which was closer to their home base of Chicago than the Appalachian Trail where the film is set.

While Colwell and Plowden are experienced campers, Cooper, their starring actress, was not. "I don't think she'll ever go in the woods again after that," Colwell says with a laugh.

Plowden adds, "She was a trooper, but she had to deal with things that people in the city don't have to deal with every day—black widow spiders, we brought in a snake wrangler. Celeste said, 'Mel is experienced with camping, but Celeste does not do camping.'"

The goal wasn't to scare people out of the woods, but rather demonstrate a powerful character. "Our tagline says it all; 'take back what's yours,'" Colwell says. "The character is not running from somebody trying to save herself. She's going after them trying to take back what they took from her."

The film has screened at around 10 film festivals in the U.S.—and even won a few awards—but it's set to make its Canadian and international debut at the Whistler Film Festival on Dec. 7 and Dec. 8.

"It fits with the area," Plowden says, of screening the film in Whistler. "This is an appealing film on many levels, as far as the environment in which it takes place and the situation we put this character through. It's a unique twist on the survival thriller genre."

Tickets and passes to the film festival are available at whistlerfilmfestival.com.