Recorded in Whistler, The Blue Hour taps experts in science, arts, and humanities 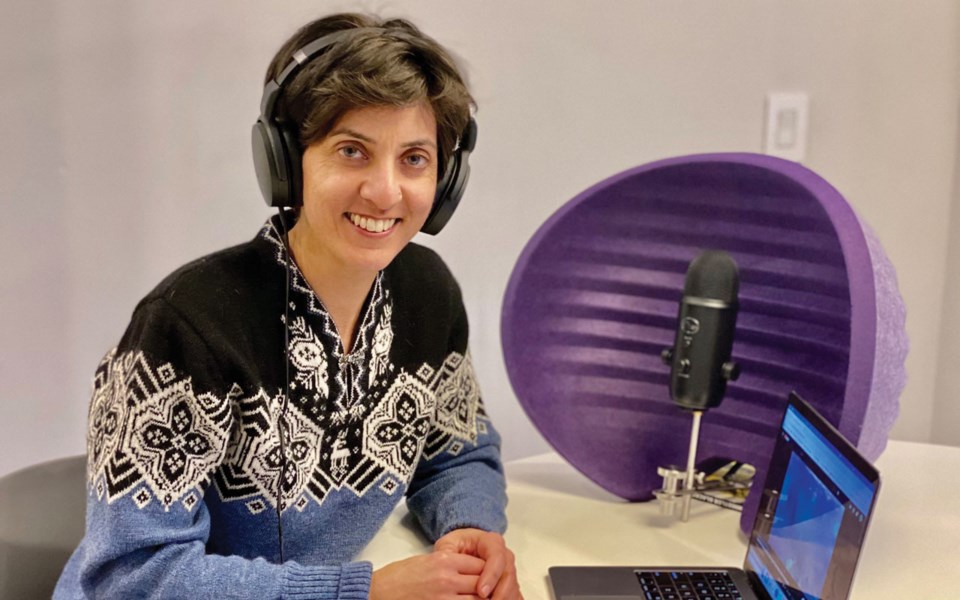 Farha Guerrero came up with the name for her newly relaunched radio show, The Blue Hour, during a difficult time.

The Whistlerite was staying in Hotel Blu in downtown Vancouver while she was in the city to be with her ailing mother.

“It was a blue hour for me,” she recalls in an email, a follow-up to an interview with Pique. “My mother was dying, but as I gazed out my window that night, to my delight, I was facing the CBC Radio Regional Broadcast centre on Hamilton Street. The large radio antennas were looking at me and that blue hour suddenly became a happy one. I knew I would be back on the radio.”

Before moving to Whistler seven years ago, Guerrero hosted a program on CiTR, a community radio station affiliated with the University of British Columbia (UBC), called Prof Talk. The concept was simple, but the amount of effort and care that went into each episode was not.

“Initially the idea was a radio show where I’d interview professors at UBC,” she says. “Because my own transcript is interdisciplinary—I’ve studied many things over many years—I wanted to have that same focus … The idea was I would interview people and talk about their research.”

Taking advantage of the experts in science, arts, and humanities—and digging into their journal articles and books—at her fingertips, she aimed for big names in academia, and landed many.

“It was a real challenge,” she says. “What I really liked was digging into sciences. It’s an area I’ve never pursued academically. I didn’t want to ask typical questions related to what was happening at the time. I was interested in getting as nerdy as you can get.”

The show, however, tapered off once she moved to Whistler and the prospect of commuting for the volunteer job became daunting. But the appeal of hosting it always lingered in her mind.

Late last year she sent the station an email asking if she could revive the program. At that point, all the programmers were producing their shows from their home, due to the pandemic. “I wasn’t even thinking I would be producing everything at home again,” she says. “I was just thinking, ‘How could I get back into this again?’”

Much to her delight, the station was on board—and she got the greenlight to produce everything from her mountain home.

Rather than focusing entirely on professors, the scope of the show is a bit wider. Now, she does a deep dive with experts from all over the world talking about life, literature, science, and philosophy.

“Every show has a personal touch,” she adds. “So the guests choose their own music they like. I ask them basically if they could give me a couple of names of people they admire, people they look up to, past or present. I’m trying to incorporate something deeper than before—the person behind the research.”

Her comeback show, for example, featured Whistler-based author, editor, biologist (and Pique columnist) Leslie Anthony who, for the record, selected John Prine and The Shins for his musical picks.

Up next, catch Shari Forbes, a thanatology expert on the decomposition of human bodies; Jerilynn C. Prior, an endocrinologist and leader in understanding and treating perimenopause and menopause; Katherine Bowers, an expert on Russian literature, culture, and Dostoevsky studies; and Julio Montaner, a leading scientist and physician on AIDS/ HIV (to be released in Spanish).

With the show available online at citr.ca/radio/the-blue-hour—and soon on all podcasting platforms—Guerrero is hoping to gain more local listeners.

“I feel like my brain here, I’m processing stuff in ways I wouldn’t have before,” she says. “When I’m preparing an interview, I might listen to a podcast or another interview. I might be walking in the forest when I’m listening. I’m so much more prepared, so much more clear.”