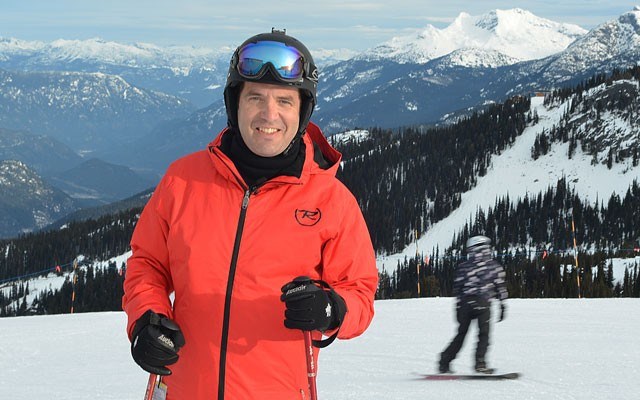 Canada's king of comedy likes to try new things, so this week Rick Mercer put on some skis and took to the slopes of Blackcomb.

The CBC television personality hosts the Rick Mercer Report (RMR), and he's also the bestselling author of a book called A Nation Worth Ranting About.

Ahead of his alpine adventure Mercer wasn't totally sure if he'd be on a snowboard or skis. When asked he pondered for a second, pointed out he'd been put on the spot then appeared to have a moment of clarity and says he was pretty sure he'd be on skis.

"I lack proficiency in either so I'm easy," he says with a hint of his St. John accent audible. "I think there's a giant air bag or something... otherwise I won't survive."

Mercer met up with Olympian and former world cup mogul medallist John Smart of Momentum Ski Camps on Tuesday, Jan. 21. RMR producer John Matthews says footage captured with Smart is slated for use in the next few weeks.

"The show will air just before the Olympics," he explained, as Mercer prepared for his ski lesson nearby.

Mercer has only skied four or five times in his life. With help from Smart he did a run, attempted skiing moguls and he "did a downhill ski jump into the air bag." If he had an extra day he says he'd put his skis back on and have another go at skiing, but he had to get back to Toronto to film the rest of his upcoming show.

"Lots of people gave me shout outs from the lifts as I was curled up in the fetal position on one of the slopes," Mercer says, summing up his day on Blackcomb.

A group of his fans also watched and cheered his flight onto the airbag.

Mercer's trip to Sea to Sky country included a stop in Squamish. He created excitement at the West Coast Railway Heritage Park where he spent his day on Sunday, Jan. 19. The park waived its usual entry fees while Mercer was filming. Park visitors were able to chat with Mercer as he signed autographs.

Gord Bell, the chief operating officer at the heritage park, says getting Mercer and his crew to come to Squamish was two years in the making.

"For the park we could never, ever buy exposure like this," says Bell, as Mercer prepared to operate one of the heritage locomotives at the park.

"I was in charge of the horn," says Mercer after his first of two film shoots aboard the train. "That was one of my duties. They told me there's very strict protocol around when the horn should and should not be blown and then I stopped listening because I didn't want to know because I wouldn't want to intentionally break the rules — I couldn't hear the rules because the horn was blowing."

Mercer's show, complete with his weekly rant, airs on Tuesdays at 8 p.m.