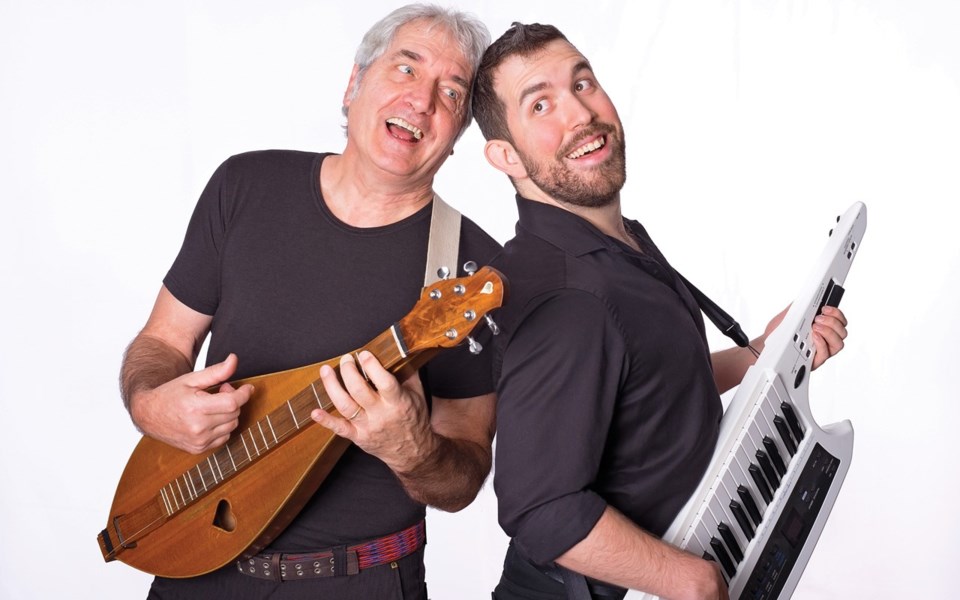 The letter was brief. "I love your music and I lost a tooth," Rhodes, then in Grade 4, wrote.

Scott, a children's performer and award-winning musician, (most notably in the trio the Pied Pumkin) had performed at his school and, during the show, promised to take part in any written correspondence.

"I received thousands of letters over the years," Scott says, over the phone from his home on Protection Island. "Mostly the letters were like Nico's which were, 'I like your music and my goldfish died.'"

Now 28, Rhodes still remembers the letter he got in return. "He wrote back saying, 'You should look into the tooth fairy. It could be profitable,'" he recalled, with a laugh.

It turned out that was just the first piece of advice that Scott would bestow upon him in the following years as part of a friendship that would culminate in the pair's 2017 self-titled album, Roots & Grooves.

Rhodes went on to become a classically trained musician, playing in various groups and becoming a musical director for stage productions. But it wasn't until 2011 that the pair reconnected in a meaningful way.

That year, Scott and his wife/manager, Valley Hennell, adapted and produced Scott's novel The Great Gazzoon into an audio novel and Rhodes' mentor, Doug Dodd, helped out on that ambitious project. It wasn't long before Rhodes was recruited to help with the recording.

Soon after, Scott and Hennell commissioned him again for a project with the Vancouver Island Symphony. "The relationship kept going," Rhodes says. "We reflect on it sometimes and we talk about it because it's an interesting series of events, but it's amazing how normal it feels. We're in a room together goofing off and having a good time."

What that meant was while they were both working on the symphony show, "in the middle of writing charts and getting ideas, we would jam," Rhodes says. "That was fun, but we didn't think much of it at the time."

Mostly, they played around with Scott's large arsenal of tracks that range from blues to roots to jazz and "swamp jam." (He estimates he's written between 300 and 400 songs over his 40-year career). "Some of those tunes I wrote before he (Rhodes) was born and some are more recent," Scott says.

Eventually, they realized their musical chemistry and decided to play a few shows. "(The songs) were all about the grooves, the ones where our chemistry really kicked in," Scott says. "It was a matter of going out and playing for people to see which worked. Then Valley had enough deep wisdom to say, 'OK, in the studio now!' In one day we laid it down."

The result was their first collaborative album, released in September 2017, filled with tracks that Scott had written over the years. It features Scott on his signature dulcimer (a string instrument that's part of the zither family) and Rhodes on piano.

Their strategy has been to play as many shows as possible in between Rhodes' schedule on the road for various stage productions.

"We do (perform) a lot of the album," Rhodes says. "It's the sound we've developed, but we've already started branching out. Our rehearsals are sporadic in terms of their direction. We'll start out to play the entire set and Rick will say, 'Have I ever played you...' We're starting to cycle through some of Rick's material we haven't previously played."

Their next round of touring will bring the pair to Whistler's Maury Young Arts Centre for a special Valentine's Day show on Feb. 14. "I can only say for certain they'll be the best Valentine's Day songs ever written. We have a whole song list we don't perform. We have an embarrassment of riches... If you don't come with someone you love, you'll leave with someone you love — guaranteed," Scott says, with a laugh.

The future too far beyond the run of shows isn't as certain, he added. The album could end up being a one-off — a platform to let the veteran musician introduce an up-and-comer who he calls "a genius."

"He's in a column I call 'other,'" Scott says of Rhodes. "He breathes music. He can do things musically that make my jaw drop. At the same time, we can be rehearsing and he can go, 'wait a minute. What's that chord you played?' So here I am playing this simple hillbilly instrument called the dulcimer and he's playing the mothership instrument. Nico's future is going to be amazing."

Catch Roots & Grooves on Wednesday (Feb. 14) at the Maury Young Arts Centre at 8 p.m. Tickets are available at artswhistler.tix.com.