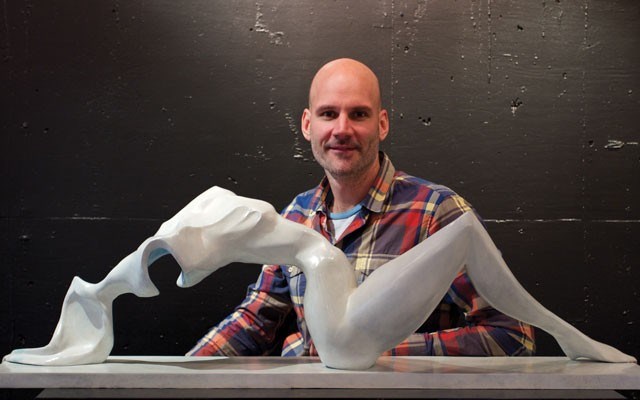 Departure James Stewart with one of his new abstract bronzes from his Drift collection, now at the Adele Campbell Gallery. PHOTO submitted

"When it came to Moore's work at Kew Gardens, when I was living in London, I would look at it and go, 'I don't know why I like it so much," Stewart says.

"It took years of looking at Moore and other artists like Picasso, who have taken a path where they have become really good at a certain aspect of art and then tried to emotionally extract a message and explain it. Moore was able to do that in sculpture in a way that had never been done before and hasn't been done since."

In Stewart's exploration of this, Whistler has had a big impact in terms of his foray into the abstract, as shown in three pieces called The Drift Series that are now on display at the Adele Campbell Gallery.

"I started drawing and playing around on the computer to see how I could represent the feeling I put into my individual pieces," he says. "We're surrounded by mountains in Whistler. I was in my kayak every day last summer and it was great. You cannot help but have Whistler seep into you. I'd been coming here for 16 years, but until I lived here full time it had not seeped in.

"As I was taking my experience from abroad and putting them into my sculptures, the Whistler environment started to give me the perspective and space to forget about what I had known before."

Oscar-nominated Stewart has produced sculptural and design work in films as diverse as District 9, Harry Potter and the Order of the Phoenix and the Narnia series. He moved from film to fine art exclusively about seven years ago.

The Drift Series is a departure for Stewart, who is known for his deeply realistic human and animal studies.

"When I moved to the fine art world I was lumped into the category of figurative art," he says. "Figurative art is a place in history, it seems, like Rodin or da Vinci or Michelangelo. They mastered the whole art of the human body, the figure. It seems like every figurative artist is trying to catch up to them, when in reality we're not. Art has never been this place in time. It has always been a practice."

Stewart likens this to yoga or skiing in that people can do it on a daily basis and not be told that it is an antiquated practice.

"People love to pigeonhole. I was told once by a Christie's Auction House person that my work was snobbish because it took skill to make it. It had been done before," he says.

Contemporary artists such as Andy Warhol made low-brow art that caught the imagination of collectors and dealers, superseding traditional forms.

"So with 15 years in the film industry behind me, I felt that level of commitment to the art to be able to express myself, when Warhol said the opposite. You could be anyone and create art. I agree with this, but not fine art," Stewart explains.

The culmination of voice and idea is the art form, he believes.

"And that's when it gets more complicated," he says. "Figurative art, because it has been placed on a timeline, has not really been analyzed."

One large figurative bronze from his earlier path, called Jeri, is a statue of a crouching Brazilian man who is resting after performing, and is currently on loan to the Resort Municipality of Whistler and is located next to Fitzsimmons Bridge.

"My intention wasn't to find people around the world and represent them. My aim was to create a global awareness of being able to relate to the person in a way and breaking down barriers and stereotypes," Stewart says.

"It is abstract thinking that puts the life into them. When you go to the new pieces, they are not too different. I am taking the same abstract thinking and just applying it to a simpler form... you take away all that is unnecessary.

"I'm basically getting rid some of the subjectivity in the people you see. Abstract takes away and lets you feel."