Sea to Sky cake bakers compete in The Big Bake 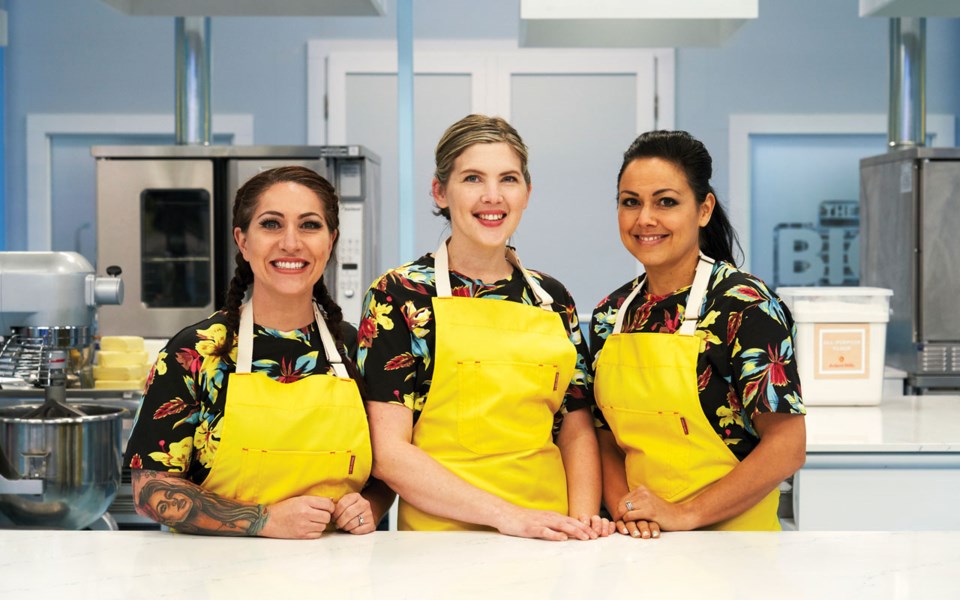 While taping an episode of the Food Network show The Big Bake, Squamish baker Samanatha Speer cried into her apron and, for a brief moment, joked about running out of the studio door.

But in a very un-reality-TV-show-like twist, it turns out those frazzled moments were left on the cutting room floor.

The story of how she wound up on the whimsical, larger-than-life production dates back to an email she found in her inbox in the fall.

While she had been making custom cakes in Squamish as Sweet Jeanie’s Cake Co., Speer had taken a bit of a hiatus from the gig to work at Pearl’s Value and Vintage Store, a social enterprise run by the Howe Sound Women’s Centre.

“I wasn’t in the cake world at the time,” she adds. “I wasn’t checking my cake emails as often. I got this email from foodnetwork.ca. I thought it was a joke; I didn’t open it.”

Eventually, she decided to check it out. Inside was a legitimate invitation from someone who had seen images of her elaborately decorated confections, inviting her to audition for The Big Bake, which pits teams of bakers against each other to build massive cakes—with a different theme each week—for a chance to win $10,000.

By the time she actually replied, Speer had two days to find a team of two other bakers willing to travel to Toronto with her for the taping. Enter April Rommel and Salome Robichaud. “We all baked cakes,” Speer says. “We were technically competitors. We’ve always helped each other and developed a relationship that way. I messaged them both and crossed my fingers—and they got back to me right away.”

After the audition, Team Whisk-Takers, as they would later be known, didn’t make the final cut, but were chosen as the “first fill-in team.”

In the end, they wound up competing—with the caveat that they had less time than the other two teams to wrap their heads around getting to Toronto and adhering to a strict set of COVID-19 safety protocols.

“I’ve never seen anything like it,” Speer says of being on set. “Everyone is in full PPE and any time I touched my face, they sprayed me. It’s their livelihood and what’s keeping them going, so they were very, very careful.”

Pandemic aside, the full-day competition was thrilling, but entirely gruelling.

“It takes 12 to 14 hours for the whole thing to be done, but the cake competition itself was five hours,” she says.

That might seem like a lot of time, but consider that the cakes are over 1.5-metres tall and include moving parts.

“There’s no extra time,” Speer says. “It took exactly five hours to finish it … Things weren’t working; we were quite a bit behind.”

For efficiency, Speer took on baking duties, Rommel took care of building the structure and stacking the pieces and Robichaud took on the fondant work, which in this case included an elaborate bunny to fit with the theme “Bunnies on Cakecation.”

Speer says she was caught off guard by a few things, including the unexpected challenge of working in a commercial kitchen.

“I didn’t know how to use their equipment,” she says. “I was thinking of my own kitchen. The mixing bowl was so massive—it was as big as my body. I had to whisper to the guy next to me, ‘How do I turn on [the mixer]?’”

While the team feared how they might come across on TV while trying to put together their bunny in a hot air balloon (weighing 31 kilograms) sailing over tiers representing London, it turned out to trigger a much different reaction.

“I could see it through somebody else’s eyes—almost,” Speer says. “I was so worried about this airing. In my mind, it was such a disaster because it didn’t go the way we wanted. When I watched it on TV I was like, ‘Hey, you did good!’

“I used to be so critical when I watched those shows. It’s so easy to be like, ‘Why didn’t you do this or that?’ Now, I know. When you’re in the moment, it’s so scary and hard.”

Watch the episode at foodnetwork.ca/shows/the-big-bake.