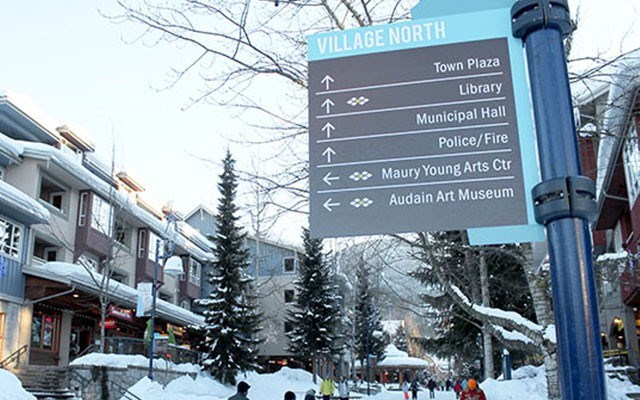 Getting around Whistler is now a stroll in the park for visitors, thanks to the completion of the second phase of the municipality's Wayfinding Project.

The Resort Municipality of Whistler (RMOW) has overseen the installation over 200 new signs, banners and portals since the project began in 2016.

All new wayfinding elements are colour-coded, consistent and designed to reduce visual clutter. The signage also incorporates materials and shapes that reflect Whistler's mountain environment, says the RMOW in a release.

Funding came from the Resort Municipality Initiative (RMI) program via the B.C. government.

The signage has also been coordinated with new pedestrian maps available at kiosks and from the Visitor Information Centre and Village Host booths.

The Wayfinding Project began with a master planning process in 2014.

Construction of the final phase of the Wayfinding project runs until 2018, and includes traffic signage in Whistler Village and wayfinding on the Valley Trail and in Whistler's main municipal parks.

"How Whistler presents itself to visitors has a significant impact on their experience, and having effective and friendly wayfinding is an important part of ensuring their time within the resort community is positive," says Whistler Mayor Nancy Wilhelm-Morden in the release.

"Through the enhanced physical signage and updated pedestrian mapping, visitors should now be able to more easily orient themselves and find their way to key destinations, such as accommodations, public parking or specific areas of Whistler.

Tickets on sale for World Ski and Snowboard Festival

Tickets have gone on sale for the 2017 World Ski & Snowboard Festival.

Along with sports events and competitions, there is a busy entertainment schedule with the Fido Outdoor Concert Series, State of the Art, Multiplicity, Intersection, and comedy, filmmaker and photographer showdowns.

The festival takes place from April 7 to 16. For more information and to purchase tickets, visit www.wssf.com.

The special manuscript competition is seeking the best original, unpublished manuscript by a Canadian citizen or permanent resident.

The winner of the competition will have their book published and launched at the 2017 Whistler Writers Festival in October 2017.

The submission deadline is Feb. 28, with the shortlist being announced on March 15, and the winner announced on April 22.

And the Whistler Independent Book Awards, for books already published, is returning to WWF for its second years. Entries for the competition open on March 1. For more information visit, www.whistlerwritersfest.com.

Meanwhile, WWF has raised $13,527 in a GoFundMe campaign started in November.

WWF executive director Stella Harvey says the money will be used to support the 2017 festival and expand literary readings from February to June.

The organization has $30,000 for established community groups and non-profits, given by the District of Squamish.

The intent of the funding is community arts enhancement through the lens of art, culture or heritage.

Applications can be downloaded at squamishartscouncil.com.

Deadline for applications is March 1.