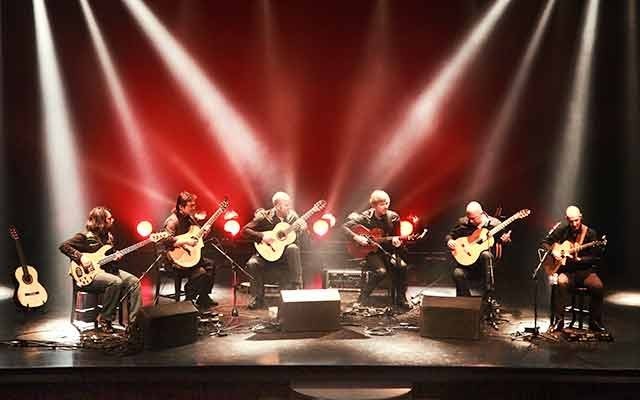 String Sextet The musicians of the Montreal Guitare Trio and the Californian Guitar Trio perform at the Maury Young Arts Centre on Feb. 14. PHOTO submitted

The six guitarists who make up the Montreal Guitare Trio (MG3) and the California Guitar Trio (CGT) are collaborators onstage and in the studio.The CGT met thanks to the illustrious teacher at a Guitar Craft course, the respected English guitarist Robert Fripp. The trio came together thanks to his program in 1991.

Their first show with MG3 was over six years ago — the two groups have since performed together around the world and put out albums together.

Between them almost every style of music is covered: classical, rock, blues, jazz, world music and surf music.

"It's been a continual process," says Paul Richards of the CGT.

"When we have a few dates playing together we try out new material."

This year they tour together in Western Canada, Quebec and into the U.S.

They perform at the Maury Young Arts Centre on Sunday, Feb. 14, with each trio taking to the stage to perform independently and also together.

"Then Glenn (Levesque) of the Montreal Guitare Trio started writing pieces for all six guitar players. So the second half of the show features more music for the sextet.

The other four players include Bert Lams and Hideyo Moriya of the CGT and Marc Morin and Sebastien Dufour of the MG3.

Each ensemble has won accolades in its own right.

The MG3 has put out six albums since forming 15 years ago and won an Opus Award for Concert of the Year in the Jazz/World music category in 2011.

The CGT has released 16 albums. They have also toured with Fripp's progressive rock band, King Crimson.

"Now we're working on two new albums. One will be the next California Guitar Trio album, more on the acoustic side than in the past, but we also be doing some work a release with the Montreal Guitar Trio," Richards says.

"The newest album for CGT will go back to our roots more and focus on our original songs. The sound will be more pure acoustic tone, rather than modified by electronics," says Richards.

"There's one arrangement of a Beatles' song, 'I Dig a Pony,' that we've been playing live that will probably go on there. We wanted to choose one that had not been overly done."

This song will be performed at their upcoming Whistler show, along with music by Radiohead and David Bowie's "Space Oddity."