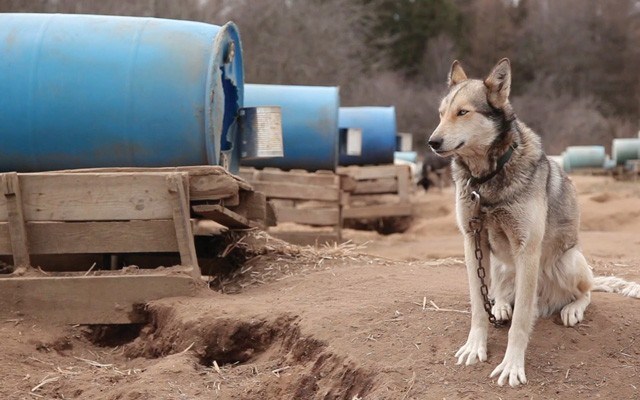 For Toronto documentary maker Fern Levitt, who is bringing her film Sled Dogs to the Whistler Film Festival (WFF), it all started with a dog called Slater.

"Back in 2010, my husband and I went dogsledding in northern Ontario. It had been something I wanted to do for a long time," Levitt recalls.

"We had a lot of fun for two days, but you don't see where the dogs are kept. I asked if I and a couple who went with us could take the dogs back to where they live, which was down the road where the office was, and when we got there we were surprised and shocked."

What they found were 300 to 400 dogs in a field, all chained and with plastic barrels as their shelters.

"It was getting to be spring and you could see all the shit and mud. The image will never leave my mind," she says.

"I panicked and asked the musher if I could take a dog home, and he told me matter-of-factly that if the dogs that were no longer useful were not adopted out, they would be put down.

"My husband saw Slater and the guy said that he was only nine and had another year of work in him, but we already had him in the car."

Slater's story of recovery was only just beginning, says Levitt.

"He was afraid of his own shadow. He was the sweetest, most gentle dog but he'd never do the things most dogs normally do, like chase squirrels or play with other dogs. He clung to my side."

"I felt like Slater's life had been ripped off. It wasn't like he was beaten at all, he was just emotionally tied to a chain," Levitt says.

With 25 documentaries behind her, Levitt was planning a new one on human rights.

"And then Whistler happened," she says.

By this, Levitt means the mass killing of dogs in April 2010 by a manager at Howling Dog Tours, which led to worldwide outrage and charges against him for the deaths of a minimum of nine dogs. He pleaded guilty and was fined $1,500, got 200 hours of community service, and was on probation for three years.

"When (B.C. Premier Christy Clark) said on the news that this was an anomaly, that this does not normally happen in dog-sled industries, I thought, 'Well, I've seen one and here is another and there certainly seems to be a pattern,'" she says.

"As a journalist, I can't turn my back on this. I had to explore it, to see if it was a humane industry. That's why did it."

An award-winning documentarian, Levitt also worked on Turning Point in History for the History Channel.

"I know that if you don't do your research your film can be completely discounted," Levitt says.

So she decided to follow the whole story, including the fallout of the scandal, and the adoptions of the surviving dogs.

"I had no idea what the animal laws were in this country. As a proud Canadian, I thought the animal rights laws were current and was shocked, to say the least, to find out that dogs are considered property... that you have a right as property to kill them, 'humanely.' I put that in quotation marks," Levitt says.

She also looked at operations in Alaska, Aspen, Germany and other parts of Canada.

Levitt knows that Sled Dogs will have a lot of interest when it screens at WFF, and has read the criticism of some company owners who said they'd been misled by her.

"The thing about the film is that we just filmed. I'm a documentarian and I believe in it. I don't do reality shows," she says.

"We went to a dog sled company in Ontario, where we watched a puppy being put on a chain for the very first time. We just filmed. We filmed a young musher getting ready for the Iditarod. We filmed the story of Whistler and what happened to dogs — at least that had a happy ending. The survivors were given to loving homes. And we filmed Krabloonik because that was a huge story, how the owner of this company in Aspen... (who) was accused of years of animal cruelty. Finally, he was convicted. The dogs were given to new owners, who said there would be changes. So we filmed the story.

"I'm not a social media person at all, but I have become one since this, reading all the comments. Certainly people who love dogs are going to welcome the film and people who are mushers, it's not like they are terrible people, but they believe what they believe.

"They want to continue what they are doing, they are worried their livelihoods will be taken away from them because that seems to be the way it is going with the public getting to know more about animals and caring about their welfare."