Snowed In Comedy Tour goes to heli-skiing and back 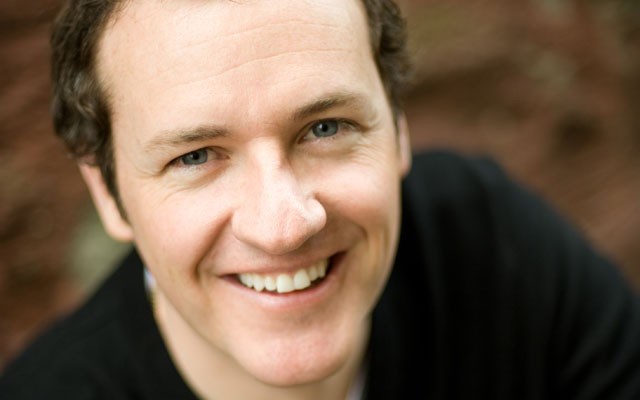 Laughing all the way to the chairlift Dan Quinn of the Snowed In Comedy Tour. Photo submitted

Talk about a working vacation.

As organizer of the Snowed In Comedy Tour, Dan Quinn agrees he has the best job in the world.

"I think so. I really do love snowboarding and I love stand up and to be able to combine both has been a dream come true. Doing it with friends and people you admire is basically the best it's ever going to get," he says.

The comedian has led the five-week tour of the best mountain towns in B.C. and Alberta for seven years now.

"It's unbelievable from where it's started and how it's grown. Now we arrive somewhere and people are expecting us, they're excited to see us instead of kind of curious," he says in a phone interview from Kamloops at the end of the tour's first week.

The comedians — Quinn, Arj Barker, Craig Campbell and Paul Myrehaug — have performed seven shows in the previous five days. The rest of the time they've been up the mountains, riding their butts off.

Then it's piling into two SUVs and on to the next gig/mountain town. You could also call it the In SUV Comedy Tour.

"The audiences are wonderful. It's almost shocking how great it is. We actually have friends we know now in different communities. We go riding with them and it's pretty special," Quinn says.

The Snowed In Comedy Tour is at the Garibaldi Lift Company for three nights, Monday Jan. 19, Tuesday, Jan. 20 and Wednesday, Jan. 21. Tickets are $20, available at the GLC or online at www.snowedincomedytour.com.

"Even Mike Wilson in the GLC. It's not 'here's the manager.' It's 'Wilson! How's it going?' He comes riding with us. It's a blast in all these little towns, we've got a community wherever we go now," he says.

But before that, Team Snowed In gets to play a little.

"We've got a couple of days off. We go heli-skiing on Monday with Mike Wiegele at Blue River (in the B.C. interior). Then off to (Vancouver) Island," Quinn explains.

"It never gets old! This is kind of the dream, right? As good as it gets. Sometimes, I think people forget how amazing this can get and you have to ask them what else they could be doing. For me, this is it."

When it comes to Whistler, there are more than a few musicians and artists who have come here for the first time and then three months later they are back. Something about the resort has clicked for them and they can't stay away.

Unsurprisingly, Quinn gets it.

The number of nights is down to the growing reputation of the show and the talent it draws to perform.

"To have Arj Barker, who is a household name in Australia and a classic act, is a big draw. Everybody who knows him comes out of the woodwork and in Whistler there are a few Aussies," quips Quinn.

"And Craig usually emcees the shows. He likes going on first and interacting with the crowd a little more. Everybody takes their turn and no one person is the star. The four of us are in it together."

Myrehaug took part in the tour's third year and had been asking to join again when an opening came up. This year was the first opportunity, says Quinn.

"He's an awesome addition. Super funny, easy to get along with, loves snowboarding... everything that the tour is about," Quinn says.

Along with the four standups and their snowboards, their SUVs are also filled with partners and friends along for the ride.

"Everybody tries to bring someone for part of the tour. It's supposed to be the best vacation you've ever had. We go out for nice dinners, we treat ourselves right," Quinn says.

"We had major snows last week but we had winter tires and it was all good. There's a lot of fun times laughing and joking in the vehicle, you know?

And it's a chance to compare notes.

"You might ask somebody's opinion about a joke. Or you start riffing off of something. But for the most part we are independent artists. But I gave Paul a tag the other day, he tried it and it worked, so there's that. We support what each other does and the closeness plays into it for sure," Quinn says.

"People hear good things about us and they come and check us out. They tell their buddies about it and the next thing you know, we keep growing and it's busier every year."