Soul of Wilderness captures the spirit of the icefields 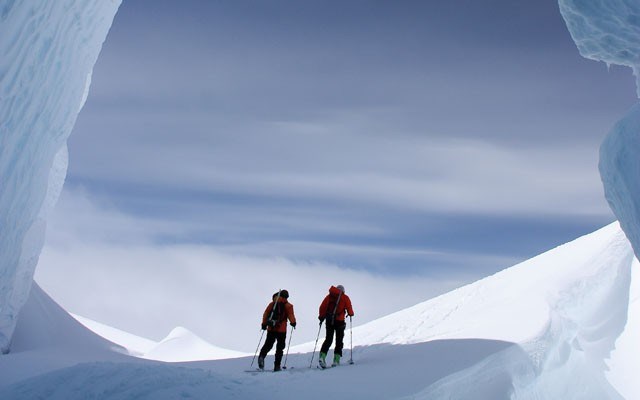 GLORIOUS MOUNTAINS Trekking on Mount Cadock, one of many locations in B.C. and Alaska covered in Soul of Wilderness by Linda Bily and John Baldwin. Photo by Linda Bily

Soul of Wilderness is a book that was 10 years in the making — one icefield at a time.

John Baldwin and Linda Bily travelled the breadth of western British Columbia and Alaska in search of patches of the world unspoiled by humanity, ski touring, taking photos and finding stories about the land, the animals and the people.

Visiting pristine and sometime relatively unknown regions — such as the Stikine, Chilcotins, the Kitimat Ranges and the Dil-Dil Plateau — Baldwin and Bily felt their travels could be a way to contribute to the better understanding of what Canada has in its wilderness.

"We do a lot of trips in the wilderness and we love it. We feel it would be better if our society appreciated it more," Baldwin says.

The book is filled with their pictures and essays about the regions featured.

The slideshow and presentation takes place at Millennium Place on Friday, Nov. 20, with a reception at 6:30 p.m. and show at 7 p.m. A book signing will follow the presentation.

Bily describes as "scary" the changes to B.C.'s glaciers and icefields.

"Maybe 10 years ago we were starting to notice. We'd be on a glacier and we'd check the GPS and map, and we'd realize that we were several hundred feet lower than the map was," she says.

"We did one trip where John went to a place 30 years after his first visit and where there was a glacier it is now a big lake. In the last couple of years we're seeing more and more changes."

Like many other trekkers, the couple use topography maps made in the 1960s and '70s and are discovering that the information is wrong.

"In some cases it's maybe harder to climb certain peaks because what was once a nice gentle climb up a glacier... With glaciers receding fast there is a lot of loose rock overhead now," Bily says.

As a former federal environmental engineer, she says it makes her feel nervous.

Baldwin agrees, adding that 70 per cent of Canada's glaciers are expected to melt off by 2100.

"There are definitely huge changes. You look at a glacier and you think it moves according to a geological time scale — but in 10 or 20 years there are huge changes," he says.

But there is still extraordinary beauty and this motivates them.

"The impetus of writing the book is (partly down to climate change) but we want to show what it is like in the wilderness and how beautiful it is," Baldwin says.

They choose their travels with curiosity about what might lie beyond the mountain range in front of them.

"We look at an atlas and wonder what some place looks like. We might be on a trip near Mt. Waddington and then see that there is an icefield called the Homathko Icefield to the south. And I say, 'We should check that out, sometime,'" Bily laughs.

"We did a show at the Rio Theatre (in Vancouver). It was sold out. People were thrilled and I could tell they felt inspired to maybe do it themselves."

Baldwin adds: "We also love it when we show it to people who aren't going to go out there. It gives them an opportunity just to see it."

Tickets can be purchased at the Millennium Place box office or at www.artswhistler.com.