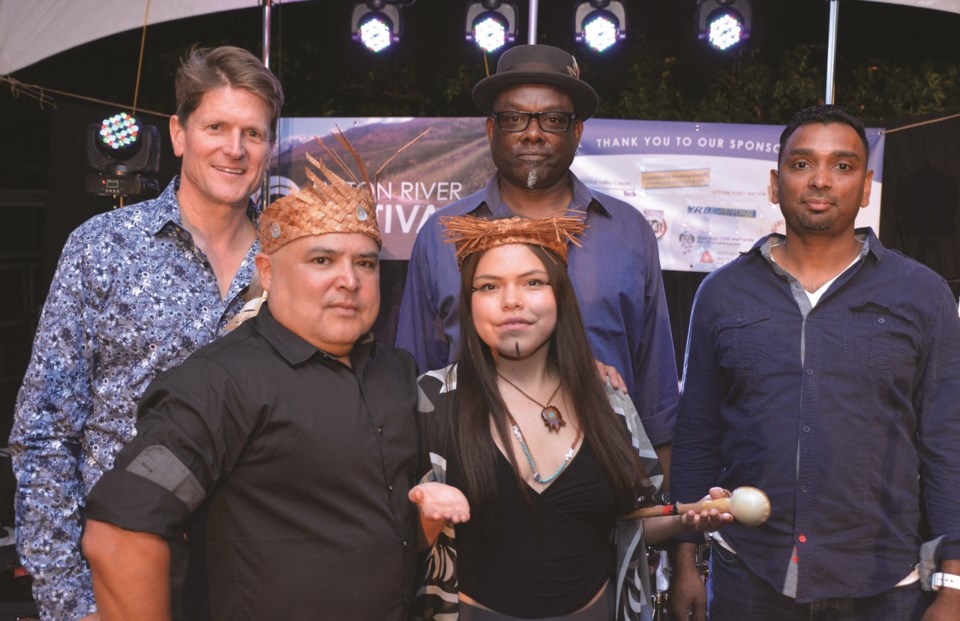 Through virtual performances, the Spiritual Warriors have played some high-profile shows even in the midst of the COVID-19 pandemic. Photo submitted

The world may have shifted online in a big way because of the COVID-19 pandemic, but Leroy Joe and the rest of award-winning Lil’wat Nation band The Spiritual Warriors continue to make connections.

The group has kept busy throughout 2020, even sharing a stage (virtually) with legendary songstress Buffy Sainte-Marie as part of the Lytton-based 2 Rivers Remix last Sunday. The weekend festival featured more than 30 Indigenous artists.

“For me, she’s been an inspiration since I first heard her when I was just a young boy, when Aboriginal artists weren’t common at all and she was out there in the mainstream,” guitarist and vocalist Joe said.

Joe got the chance to see Sainte-Marie perform a couple of years back, but unbeknownst to him before the show, she was presenting her poetry.

“She didn’t even sing. She did poems,” he said.

“It was still awesome, but I thought I was going to see music,” Joe added with a chuckle.

Admittedly, Joe doesn’t tend to tune in to the band’s prerecorded performances for fear of nitpicking, but, speaking before the festival, planned to tune in not just for Sainte-Marie, but for acts such as the Snotty Nose Rez Kids and a plethora of up-and-coming rappers.

“There’s an Aboriginal music scene that’s really exploding. We’re really starting to get to know each other and collaborate more,” he said, adding that despite losing some shows and festivals this summer because of the COVID-19 pandemic, other opportunities popped up.

“We started doing this virtual thing and it’s really been actually pretty good. We’ve done at least 10 shows so far,” he said. “We’re very fortunate. It was completely unexpected.”

While a couple of the band’s shows have been taped or streamed at proper venues such as the Squamish Lil’wat Cultural Centre or Vancouver’s Rickshaw Theatre (that show, opening for Buckman Coe and Khari McClelland, streams Sept. 11 at 7 p.m. on the theatre’s Facebook page), the band has typically set up shop in the backyard of djembe player Rich Doucet. The change in venue hasn’t altered much for the band.

“We do what we always do. We just go and play,” Joe said. “When you’re live, you’re playing a show in front of people that are watching, so you’ve got to be on your game.”

As the frontman, Joe has had to tap into his imagination to know who he’s performing for.

Another recent show came in the form of a performance at, of all events, a geological symposium conference, to which Joe was connected through a friend.

The organizers were trying to understand and predict natural disasters and attempted to tap into as much Indigenous perspective as possible, right down to the entertainment.

“They’re looking at First Nations communities and leaders for their knowledge, so when they heard our songs, it spoke to them,” Joe said.

Joe has also been thrilled to round out the band, adding guitarist Cuyler Biller over the summer, joining Joe and his daughter, vocalist Daisy, Doucet, drummer Tim Lall and bassist Mike Rowe.

“He takes that load off of me so I don’t have to do too much,” Joe said of Biller.

In terms of what audiences are hearing, Joe said the band wrote some new songs over the summer and he hopes to record them early in 2021. The inspirations fit in with the band’s past work, “history, land, culture, world happenings,” Joe said.

“They’re songs with a message, songs about real life,” he said. “One of our songs [“Brothers and Sisters”] is about bringing people back home from the cities, from the street life and it’s a really powerful song.

“It’s hard to sing because so many of our people have been suffering down there for years and years and they never make it home. They make it home in a pine box, so to speak.”

Another tune is about bringing together the St’at’imc Nation.

“There’s 11 communities and we’re not as united as we should be,” he said.

Though Joe’s songwriting is inspired by history and world events, he’s avoided the constantly changing COVID-19 world as a muse.

“The pandemic is such a bummer. I’m trying not to be bummed out about it because I’m raising two grandchildren now and I’m just trying to keep things positive,” he said. “I haven’t written any pandemic songs. I’ve heard some and they’re such a downer.

“There are the funny ones you hear, the parodies, but the pandemic has not inspired me.”

For more on the group, check out www.thespiritualwarriors.net.