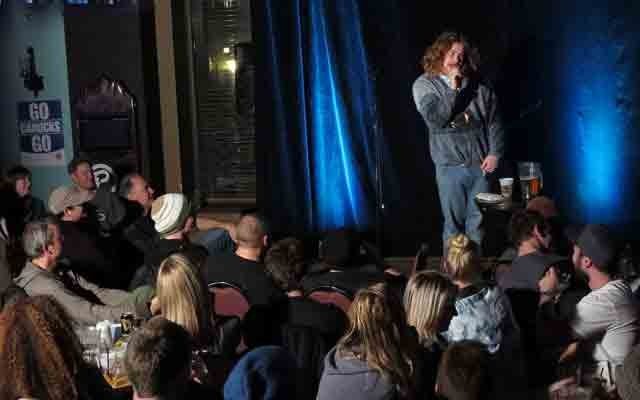 Daniels and the Between Shifts Theatre company took their production of Tennessee Williams's The Glass Menagerie to the Sagebrush Theatre in Kamloops earlier this month, earning a standing ovation from the crowd of over 400. Hopefully, it's a sign of things to come for the grassroots stage company.

"It was only (Between Shift's) second time going there, so it was really awesome to grab one of the large awards," Daniels says. "As a theatre group, it's another notch on our belt and feather in our cap. Our credibility just goes up a little more."

The Glass Menagerie went up against seven other local productions from across B.C.

Whistler's favourite mop-headed comedian and pizza delivery guy, Kyle Killeen, competed against 19 of the region's best stand-ups on Monday, July 14, to earn a spot at the Pemberton Music Festival.

"I didn't win it, but it still went well," he says. "It was the first time in a while that I've structured a set, timed it out and really put a lot of effort in it.

"It was way different than doing stand-up here (in Whistler)."

Killeen was of only two comics from the Sea to Sky represented at the competition, held at The Pint in Vancouver. Squamish's Kelly Dyer also performed.

One band and one band alone will know what it's like to kick off the main weekend festivities at the Pemberton Music Festival on Friday, July 18.

And that would be rocking power trio Flash Lightnin' of Toronto.

Guitarist and vocalist Darren Glover says being a part of an event with so many big names and different musical styles is "what it's all about" for a band.

"The sharing of entertainment, having your name alongside artists you respect and know... the other part is playing for people, that's the main reason. To get the opportunity to play for people who may have heard of you but never seen you or showing yourself off to people who don't know you," he says.

He adds with a laugh: "People can start their day with the best rock 'n' roll band in the world! That's exciting for us. Zero pressure!"

The band most recently opened for ZZ Top during her Canadian tour, playing music from their latest album, For the Sinners.

"We were lucky enough to have that as a kickstart to selling the album and getting it out there, and that's a big part of why we're coming back out that way to Pemberton," says Glover.