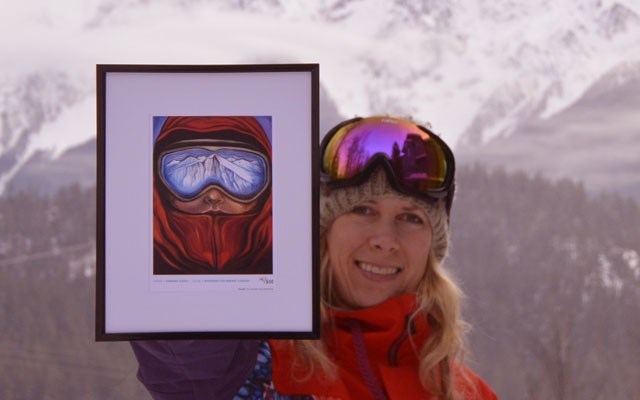 Ode to the mountains Artist Vannesa Stark with her painting Ode to Joy. Photo submitted

Vanessa Stark's Christmas was made a little cheerier when one of her paintings was selected to be an annual gift sent out by a Vermont marketing company.

Limited-edition copies of Ode to Joy, an oil painting depicting the reflected view of mountains from a ski mask, was sent out to 800 clients and staff of Fuse Marketing — it was done in support of a charity close to Stark's heart, Boarding for Breast Cancer. The company made a donation to the charity.

This is not the first time her art has been used this way.

"The first time I did it was for a friend of mine who had breast cancer and who went through it. She is cancer free right now. I had a live painting event at Merlin's two years ago. There were a bunch of us and we all painted snowboards," Stark says.

"Fuse approached me through email and asked me if I would be interested and I was, of course, totally interested."

A Fuse spokesperson said this was their eighth collaboration.

Holiday Artist Collaboration and other community initiatives can be found at www.fusemarketing.com/community.

The painting is special to Stark:

"I was trying to sum up everything I feel about the mountains. I just love them so much. I tried to make the picture neutral, so people can take it as a skier, snowboarder or just someone who loves the mountains.

Artist Paul Paquette's ability to capture the classic building of Vancouver on canvas is being put on display in a new show at the Adele Campbell Gallery in Whistler.

Vintage Vancouver depicts the beauty of the architecture and streetscapes of the Downtown Eastside and the city skyline in vibrant colour.

"I love old things, it is something that has always drawn me to museums, antique stores, old cars, or the rusting machinery in a farmer's field," Paquette says, "so it was only natural that it was Vancouver's architectural heritage which most inspired this show. One of my principal aims was to capture some of the beautiful edifices whose rich details seem to reflect the young city's optimism and civic pride.

"Many of these structures — whether modest or grand — have come to define our neighbourhoods and skyline. Many were created by the hands of very skilled artisans on a human scale and possess character and presence which I feel so many of today's modern buildings lack."

An opening reception for the show takes place on Saturday, Jan. 17, from 4 p.m. to 8 p.m. at the Adele Campbell Gallery at the Westin Resort and Spa. All are welcome.

The institute, which offers young musicians training and playing opportunities, will run from June 28 to July 5.

The students will be mentored by members of the orchestra, under the direction of the VSO's musical director Bramwell Tovey.

"Creating the Vancouver Symphony Orchestral Institute at Whistler is part of our plans to grow our cultural and learning opportunities," said acting mayor Jack Crompton in a release.