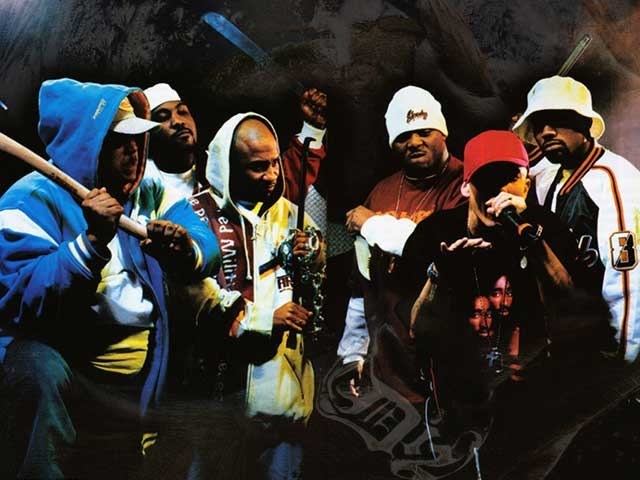 Tickets: $20 in advance at Billabong

The masterminds behind the anthemic hip hop hits, “Purple Pills,” “Fight Music,” and “40 Oz.” are coming to a club near you. That’s right, D12 has added a Whistler stop to their most recent tour.

Catching up with this group while they’re on the road isn’t easy — from the sound of it, their tour bus is the place to party, even on a Tuesday afternoon. But the cell phone eventually landed in the hands of Swift (aka Swifty McVay).

They were on their way from Lethbridge to play another show in Calgary.

“We’re keeping our spirits up and getting ready to do what we do best!” Swift said with a laugh. “This’ll be our first time rockin’ the microphone in Whistler, and I’m looking forward to it. It’s a blessing to be able to come up and do the do.”

For those of you not finely attuned to the hardcore hip hop of the Dirty Dozen out of Detroit (more commonly known as simply D12), here’s a quick rundown: the original D12 crew started out as Proof, Eminem, Bizarre, Kon Artis, Bugz, and Kuniva, with each member developing an alter ego to make up their Dirty Dozen moniker. Basically, it all started out at the open mic night at the Hip-Hop Shop off Seven Mile in Detroit.

“We had an open mic every Saturday, you know, and everybody from all four corners of Detroit used to meet in there every Saturday to rock the mic, and this went on for a good four or five years, so that’s where we all got together as family, because we never missed a Saturday,” Swift explained.

Proof, the host of the Hip-Hop Shop, decided to put together an all-star team, and D12 was born.

“The first one that was signed was supposed to come back and get everybody, and that’s what happened,” Swift added.

In 1996, Eminem was discovered by none other than Dr. Dre, and D12 rose up with him. In 2001, they released their first full-length album, Devil’s Night , with their sophomore full-length, D12 World , coming out three years later. In between, they’ve also released an extensive list of impressive solo projects.

But Bugz and Proof were killed in separate violent conflicts, and now, there are just five on the roster: Eminem, Bizarre, Kon Artis, Kuniva and Swift. (The answer to the next logical question is “no, Eminem isn’t on the tour.”) Eminem is busy in the studio, and this time around, Bizarre, Kon Artis, Kuniva and Swift are swarming stages across Canada with Royce Da 5’9” and Joe Budden, before they head overseas to wreak havoc in Europe.

Since the passing of Proof (aka Derty Harry/Oil Can Harry), the founder and, some would argue, backbone of the group, back in 2006, people began to doubt that the remaining members of the D12 crew would continue to tour or even make music together.

This tour — aptly dubbed the Never Say Never tour — was put together, in large part, to dispel those rumours and whispers.

“When our brother Proof passed, a lot of people were wondering, they’re like, ‘man, I wonder how that’s going to be, or this is going to be, are they ever going to be as strong as they used to be?’” he said. “And now, we’re doing it again, with more strength than ever. So never say never, I’m tellin’ ya!”

Clearly, the group has gone through a lot of changes over the years. But they haven’t weakened the group — rather, they’re stronger.

“It made us look at things different, it made us sharper and wise, and it made us look at people around us and see what was going on,” Swift reflected. “…We had wool over our eyes a little bit — not to the fullest — but now the wool is gone.”

Anyone who is familiar with the scene is probably well aware that D12 had a beef with Royce a few years back. What else would you expect from these self-described “verbal ninjas”? Their roots are in battling. But apparently, that’s been cleared up now, and Royce, Joe and the men of D12 are one big happy family on the road. They’ve even seen the addition of a well-known hip-hop artist from Halifax, Classified, to the tour.

“We’re having a ball, man — every day is tons of laughs…. We’re all a big family right now, and that’s what touring’s all about,” Swift added. “Doing what you love doing, and being able to travel with family-oriented values and looking out for one another, and that’s what’s up.”

A quick visit to the D12 World website is proof that this crew is having a good time on the road. Someone decided to put a camera in their hands, and now we have Joe Budden TV, featuring segments entitled, “French Canadian Old Racist” and “Tightest Jeans Ever.” Intrigued?

They’ve been hitting a lot of smaller clubs along this tour, which seems to work well for the group.

The intimate, high-energy gigs are definitely a bit of a throwback to their open mic nights at the Hip-Hop Shop.

“We used to do open mic in St. Andrews back in Detroit, and that was our home to rock the mic in battles, so a lot of the clubs that we’re doing on this tour remind us of St. Andrews, like at home.”