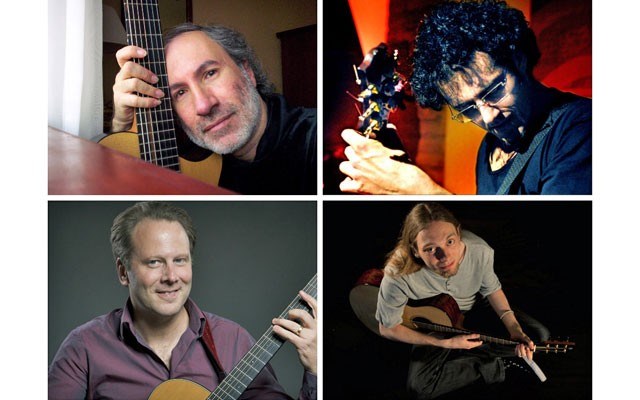 A lot of pluck

It's safe to say that Brian Gore is fingerpickin' good ­and so are his friends.

The San Francisco-based guitarist has been touring his guitar quartet, called International Guitar Night (IGN), since 1996, inviting new and seasoned talents to join him on the road each year to hit the smaller halls around Canada, Britain and the U.S., melding styles and influences in order to make audiences happy and to create music that inspires and challenges the artists playing for them.

Having just finished a different kind of tour in Alberta with visual artist Bill Russell, he has come down to Vancouver to await the arrival of his 2013 IGN team: Quique Sinesi of Argentina, Pino Forastire of Italy and Mike Dawes of England. Once they arrive from different points around the globe, they go into rehearsals to test each other's styles and prepare for their three-month tour.

The four perform at Millennium Place in Whistler next Wednesday, Nov. 6.

"The idea of the show has been to feature the most interesting and highly regarded players in the world and then put them onstage together both solo and collectively," Gore says in a phone interview from his Vancouver hotel.

"I'm the perennial guitarist and I put together the lineups every year. The others have solo careers and are established performers... I've been doing it for 17 years now and every year we have come together with something different and original."

The four musicians will play solo and then they will all combine their talents.

Sinesi is an Argentinian tango and folk guitarist who "incorporates elements of jazz, improvisation, classical and world music" into his repertoire. He plays a seven-string Spanish guitar, a Piccolo guitar and a Charango, a South American lute-like instrument that originated in the Andes of Bolivia.

Gore is excited to have Sinesi on board because it is the first time IGN has brought a performer in from the Tango tradition.

Forastire's style is eclectic. The Italian has a wide background in classical, rock and contemporary guitar styles and has been described as combining "classical phrasing and a focus on distinct and addictive melodies."

At just 23, Dawes is already a seasoned session guitarist, already touring as lead guitarist with Justin Hayward of The Moody Blues.

"There's a nice balance in what Mike is doing. It's great to get him at the start of his career. A lot of professional guitarists wait until they are in their 30s till they start touring at this level," Gore says.

He describes his own playing as "California finger-style."

Gore has brought two incarnations of his IGN to Whistler before and he says the audiences at the resort have been "interesting and engaged people."

After opening gigs in Nanaimo and Cowichan, a place Gore has a soft spot for because it was one of the towns where he launched IGN, he is bringing the players up to Whistler a few days early in order to enjoy what the resort has to offer.

"We see ourselves as ambassadors of the guitar. In doing that, you've got to take advantage of what the guitar offers as an instrument but then play the music as well. We want the show to be something that anyone who loves music can see," Gore says.

Prior to the performance, intermediate and advanced guitarists will have the opportunity to work with Gore and the other three guitarists at a one-on-one Mastering Guitar Workshop, which takes place at 3 p.m.

Tickets for IGN are $26.50 for regular admission, $24.50 for seniors and students and $22.50 for Whistler Arts Council members. They can be purchased online at artswhistler.com or at Millennium Place.