Stripping away the stigma

A girls’ guide to taking it all off What: The Inaugural Amateur Boot Ballet Where: The Boot Pub When: Saturday, Jan.
Jan 23, 2003 8:00 PM By: Dana Michell 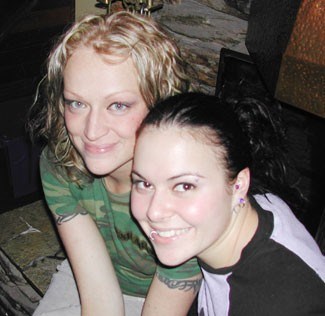 A girls’ guide to taking it all off

What: The Inaugural Amateur Boot Ballet

Where: The Boot Pub

Have you ever wondered what it’s really like to strip? What it’s like to dance nude in high heels and have people pay you for it? If you look anything like me, being nude is not nice. Don’t know about you but copping an eyeful of myself every morning makes me layer up more than needed. But for some girls out there, their flesh works well when on parade.

It’s the eve of the Boot Pub’s inaugural amateur Boot Ballet, a booty call for wanna-be disrobing divas and as part of the naïve sisterhood of non-strippers, I thought it was only fitting to find out what it’s like to flop out around a fireman’s pole. How does it really feel to grab a few greenbacks with just the flash of a nipple?

There must be a few girls out there interested because their inquiring minds prompted the Boot Pub’s boss, Paul McNaught, to offer them the chance to dance.

"We get quite a few girls in the audience at our shows and they’re always asking when they can have a try. I guess because the Boot Ballet is not your typical strip joint, they feel comfortable in giving it a go, so this night is for them," said McNaught.

Two of Whistler’s own pro exotic dancers, 25-year-old Mary and 21-year-old Diana, are firm friends with firm bodies. Between dances last Friday night, they happily agreed to share their strip tips, the good, the bad and the ugly. For the record, they’d like to say it’s not easy being an exotic dancer. Apart from the social stigma you have to deal with when it comes to your chosen profession, there’s unwanted hair, unwanted advances, bras that won’t undo and stilettos that can collapse underneath you.

But for these girls, the upside is hard to ignore. Fast money, loads of travel, and the chance to dance.

Pique: How long have you been stripping?

Diana: Four and a half months

Pique: How did you get involved?

Mary: I had a boyfriend that cheated on me so to get out I needed my independence. Exotic dancing got me out of there real quick.

Diana: I really wanted to buy myself a snowmobile so I entered an amateur contest and from there I’ve travelled the country.

Pique: What was your first time on stage like?

Diana: I was pretty awkward and couldn’t walk in high heels. It was pretty funny but the crowd were really supportive which helped lighten me up. At one point I accidentally kicked my dress right off the stage and just stood there staring at it. The crowd thought it was part of my act. It wasn’t. I was just thinking "whoah, I’m really naked."

Pique: How do your friends and family feel about you dancing nude?

Diana: Not too many people know yet but the ones who do don’t care at all. I’m such a tom boy that most of them can’t believe I can be all sexy. I saw my math teacher in the crowd once and I was like "Ewww, that’s so gross, get me out of here."

Pique: Do you get hit on by sleazy guys much?

Diana: Nobody really touches you, if they do, you give the bouncer a quick knowing glance and they’re history.

Mary: You get all the lines but I’ve got come backs that are 10 times better. At first I was like "Oohh, I have so much power," and you feel like a bit of a celebrity but it’s just another job. Guys might come up and say "Hey baby, let’s go party," and I’ll say "Dude, I’m at work."

Pique: So what’s the best part about exotic dancing?

Mary: I’ve always loved to dance and perform. I don’t care that I’m naked. It’s just a body. It still makes me laugh we can make money off guy’s immature fixation with nudity.

Mary: Long term it’s not good for the soul with all those late nights. I try and only do it a couple of months a year.

Pique: Is the pole hard to master?

Diana: I love the pole. I love to try new moves on it, although I’ve fallen on my head a few times. I also love the glider that goes across the stage. I’ve fallen off that too and got bruises on my chin.

Pique: So what’s the secret to looking good out there?

Mary: Seriously though, tidy up down there, ladies. Clean up all the skank and always check to make sure you don’t have any toilet paper stuck.

Diana: Practice unhooking your bra because it can get caught, and make sure your G-string is not inside out.

Mary: Don’t do drugs, have some rhythm and if you can’t dance, get a boob job ’cause then you can just bounce.

Diana: If you’re really fat, don’t do it but if you’ve got a bit of meat, great. Guys like an ass anyway. You’d be surprised under these lights how many of your fat flaws can actually disappear.

Pique: How do you make it look so easy strutting around in 10-inch platform stiletto knee-high boots?

Diana: Practice. Walk around the house in them, do your laundry, do your vacuuming in them.

Mary: You won’t lose with short and trampy.

Diana: I find simple costumes. They love the school girl look and the sensible secretary who turns into the wild woman.

So there you go girls, if you’re still interested the Boot still has spare spots for Saturday night’s showdown. The stage and the pole will even be available all day Saturday for practice. On the night, a warm, welcoming crowd is encouraged and a co-ed panel of judges will be on-hand to dispense advice and points on choreography, tricks and talent. The audience will provide the clap-o-meter. It’s not necessary to get completely nude but entrants must come armed with a routine in mind and their own music. The top three finalists will take home cash prizes. Call the Boot Pub for more info: 604-932-3338 ext.112.