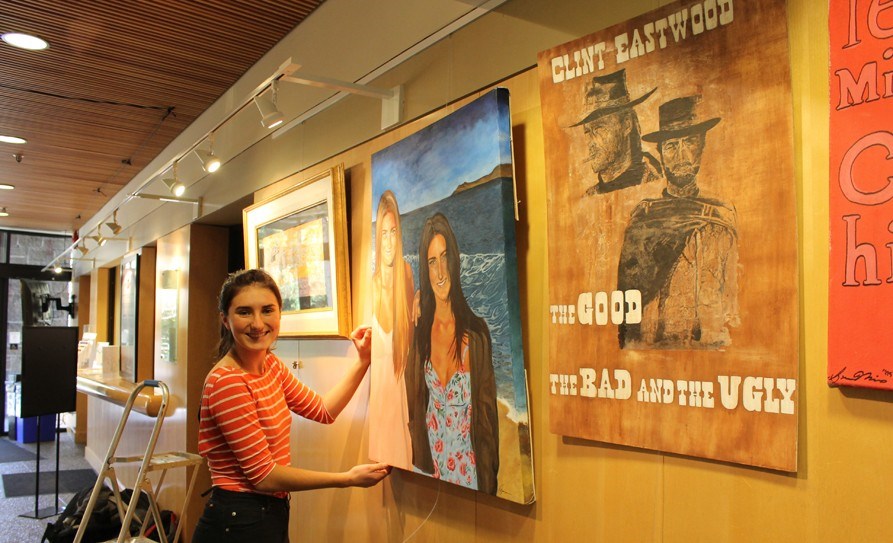 Putting together an art show featuring dozens of artists and 53 pieces might be time-consuming, but for Whistler Secondary School art teacher Brenda Norrie, it's worth the effort.

"It's an incredible amount of work putting the show up," Norrie says. "I'd never do it if it weren't for the pay off seeing the kids' work up."

The year-end show at Scotia Creek Gallery will feature pieces from Grades 11 and 12 students in her art class, a few of whom are headed off to study fine arts in the fall. The work ranges from painting, to drawing and photography, and includes artists of different abilities. "Each one does a little artist's statement and some do a few sentences because they don't know what to say," Norrie says. "It's quite a frightening thing to put your work out there because art is so personal. To have to do an artist statement as well is a whole other level of anxiety."

The hands-on experience in a professional gallery is extremely valuable for the budding artists, she adds. "I'm really grateful to Millennium Place that they give us this opportunity and I hope it continues," she says. "I think it's a great marriage between school and community. I get comments all the time from people who have seen the show (in past years). They like to go around and see the artists statements and look at the pieces."

This year, students are also helping to install the exhibit, gaining more real life experience in the art world. "I used to do it all myself," Norrie says. "Not only was that a lot of work, but I think it's valuable for them to see how pieces go together and what makes good grouping."

Grade 11 students Derek Hemingson and Vince Zerna hung their two paintings depicting women's faces next to each other alongside other students Tuesday afternoon. "We kind of have a (theme) where we draw girls and it worked out. We had the same idea, but mine is a different concept," Zerna says. "His is futuristic and mine is natural."

Neither was feeling nervous ahead of the opening. "It's pretty cool," Hemingson says. "It's the first time I've seen (my work) in a gallery. It's nice to see them laid out on a wall, professional looking."

While the prospect of showing art in a public group show is exciting for some, it's equally scary for others, Norrie says. "It takes it right into the real world and makes it professional. The fact that they can sell their pieces if they want to, it's terrifying and thrilling at the same time for them. It's art work to show not only to peers, but to the public," Norrie says.

The subjects featured in the art show also vary wildly. This year students have tackled landscapes, abstract art, architectural drawing and portraits in a variety of mediums they learn throughout the semester. "I'm so happy they get this opportunity," Norrie says.

The show was open to the public beginning May 1, but the official reception will take place May 14 at 6 p.m. to coincide with the WSS production of

Footloose, also running at Millennium Place. Work will be displayed until the end of the month.