Swing into the weekend with Dal Richards 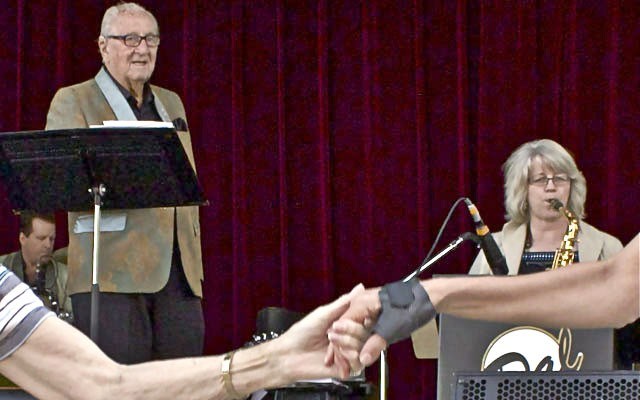 It's proof the legendary 97-year-old swing bandleader does take days off now and again.

"Never from practicing!" laughs his wife and manager Muriel Honey-Richards.

Richards interjects: "I try to get an hour a day in."

These days, after a musical career spanning almost 80 years, Richards mainly conducts his band and sings; he doesn't play as much saxophone or clarinet anymore.

The maestro's Wikipedia page declares "Years active: 1940—present," and a short look at his career highlights is awe-inspiring.

Richards performed at the opening of Vancouver's Vogue Theatre in 1939, the Empire Stadium in 1954, the Queen Elizabeth Theatre in 1959, the Pacific Centre in 1971, and both Vancouver Convention Centres — the most recent one for the 2010 Winter Olympics.

"We opened a lot of venues. I can't remember them all," he says.

It's as if the history of Vancouver has been wrapped up in his career.

"It's more like I've been wrapped up in it!" Richards jokes, explaining that they both seem to need each other.

Muriel joins in: "Talk about living a long life, the music itself keeps him alive. He's blowing his horn and singing and waving his arms in the air. It's all that love that comes back at him. It keeps him active."

The Dal Richards Orchestra always starts its set with Glenn Miller's 'In the Mood.'

"I suppose it is my favourite. It captured my imagination when I first heard it played by Miller in the '30s. It's still popular," he says.

"His influence is still in effect, after all these years."

And Richards' influence after all these years is also clear.

"I feel grateful," he laughs.

"Seriously though, I'm grateful I'm still able to do it. I still enjoy doing it. It's a long, long history. Probably unparalleled, I suppose."

He performs about half a dozen or so big concerts each year, along with private parties and corporate events. B.C. business magnate Jimmy Pattison regularly books him. He plays weddings, gay and straight.

"And there are a lot of 90-year-olds who celebrate their birthdays with Dal," Honey-Richards says.

"There's a traditional repertoire of big band music that has been prevalent and popular for years, and we do that. Songs like 'Sing, Sing, Sing,' 'As Time Goes By,' 'Kansas City,' 'Mustang Sally,'" Richards says.

"Young people know about swing before they've heard me, so they are acclimatized to what we are about to play."

Interestingly, Richards volunteered to be tested as a "super senior" last year, with scientists looking at his body's abilities.

And Honey-Richards says it brought out his competitive side.

"As soon as they brought out a grip, or told him to get out of his chair and run to the other side of the room, he said, 'Let me do it again! I think I can do it faster!'"

Richards is planning an 80th- anniversary concert in Vancouver later this year, but in the meantime performs at a free outdoor concert with his 11-piece band as part of Whistler Presents at Whistler Olympic Plaza on Friday, Aug. 21, at 7:30 p.m.